Aah, I remember it well. It was a cloudy Belgian Sunday, with nothing more to do then watching the good ?old electric tube and smoking the pipe. Little did I know there we?re forces in play who wanted me to do some reviewing. Seems like the OC gods were restless, so the best thing to do was to sacrifice them a review. Since my editor dropped off the A1 water cooling kit the other day, I could really please the gods this time. Maybe they would use their divine powers to give me that Mustang I always ask for Christmas!

Hello dear reader, it’s reviewing time here at Duron’s test-labs, the moment has come to open my early present from the bearded man and examine it carefully. The box from 1A-Cooling is quite...euh, blank. Not that I expected it wrapped in gift paper, but some box art would be nice. Maybe this is only a temporally pre-production version, but we've seen in happen in the past that manufacturers cut down on costs by packing their goods in plain cardboard boxes. Surely I like the idea that they keep costs to a minimum, but I think the box where your brand new water cooling kit in must be pleasant for the eye too. After all, the packaging is what you see first. 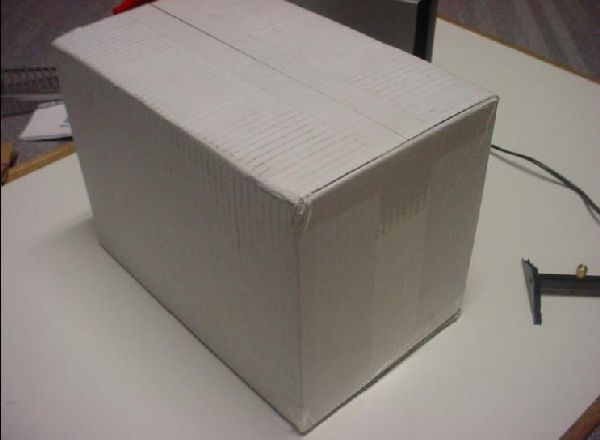 Inside the box, things are a bit crammed together, and just about everything is wrapped in cardboard, preventing any possible damage during transport. Since nowadays almost everyone cares about the environment (and they should!) it's no a surprise to see this type of protective material, as cardboard is easy to recycle. 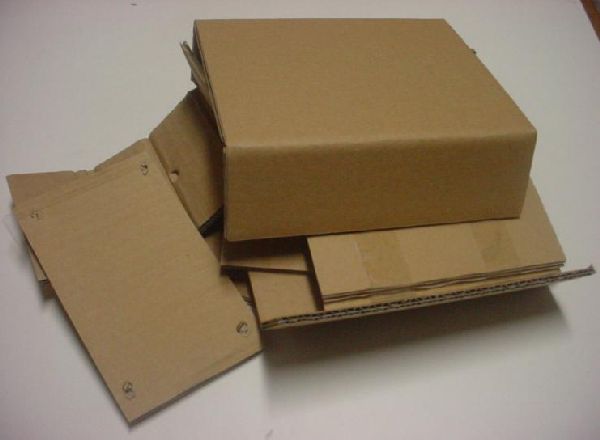 One heap of cardboard: check

Now then, on to the components! By now, I can easily name all of the objects inside before I even unpack them; they are just about the same in every water cooling setup. You have your water block, pump, reservoir, radiator, tubing, retention mechanism and fittings. Guess what it's in the box? Yes, the whole lot. The only difference is that the pump and the reservoir are attached to each other.

So first of, the water block; I'm not really sure how the insides look but this photo should give you an idea, however I'm not planning to cut it open to find out. There is an interesting difference between this water block and all the other ones, which makes it quite special. At the bottom, there is a strip of regular copper in the middle, where the core makes contact and brass at the sides. This raises some interesting questions about the use of brass in water cooling because the thermal conductivity of this brass isn't nearly as good as copper.

Another question is the oxidation factor. Brass has some zinc in it; this metal is also released in the system, and can create oxidation when combined with other metals, like aluminium and copper. 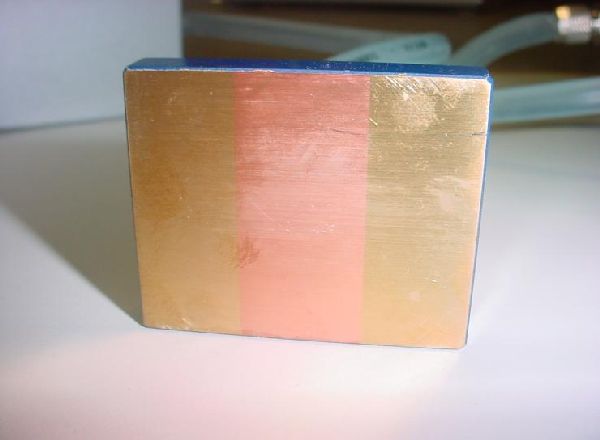 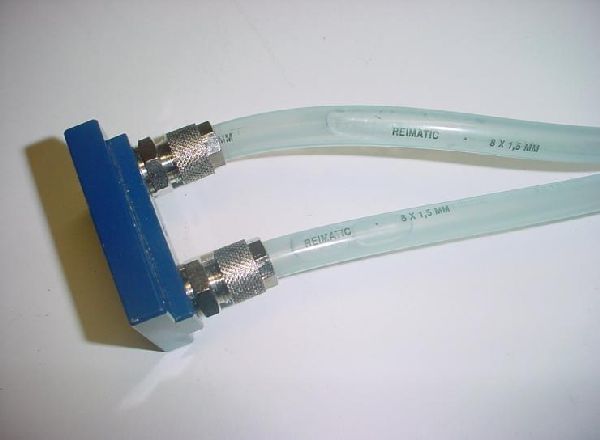 As you can see, the base is lapped well enough to be effective, but it's not quite polished enough to act as a mirror. Sanding it down a bit could improve temperatures, but fabrication-wise the cost is too high for mass production.

From the water block, following the tubing, we go to the radiator, which requires two free 5,25" bays to be installed properly 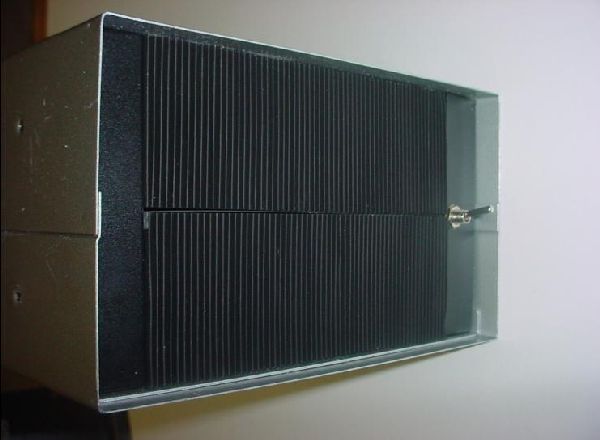 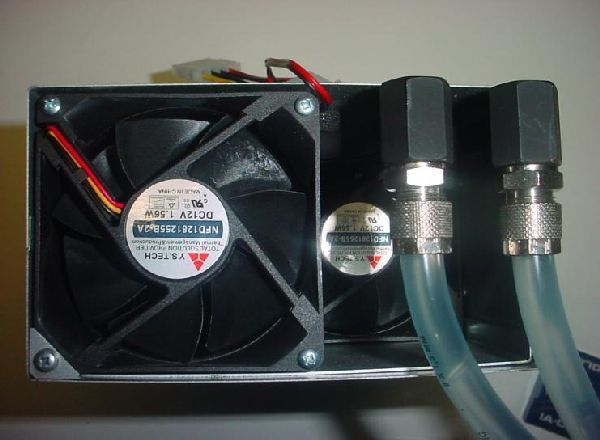 One internal radiator with fans: check

For the beginning water cooling enthusiast this kind of setup is ideal. No drilling, no tubing going in and out the case, no external components. The downside of this method is that everything is subject to ATX standards, which are really not designed for internal water cooling systems. A good example of this can be found in the 5,25" bays. Some cases have little rails in the bays for your drives to 'rest' on, so they don't fall down when you accidentally loosen al the screws without holding the drive yourself. These rails or small supports make a big problem for this kit, as the radiator has only a small gap in the middle. If you have these rails or supports, you'll need to remove them or the radiator won't fit. With cheap cases this usually isn't a big problem if you have some pliers around, but what if your case is made out of 3mm metal sheets? You can't really bend that with some simple pliers, and it's a hard-to-reach place to use your Dremel. (Taking into account that you have and use a Dremel)

If all of this doesn't make sense, just look at the following pictures, they say more then the 100 words describing the problem. 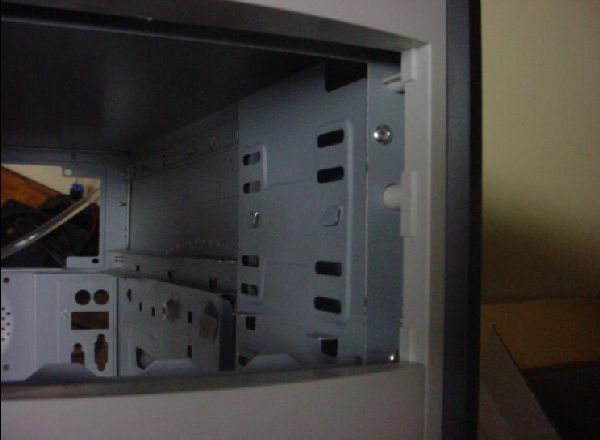 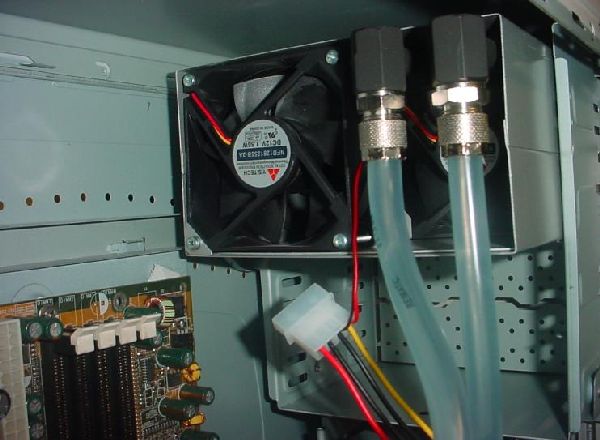 Ahaa! Now I know what you are talking about!

Right. Next in the loop is the joint pump-reservoir station. The pump itself is just a Hydor L20 pump, which doesn't need an introduction. For the people who never seen or heard about Hydor pumps: they are the next best hype after Eheim, and everyone knows Eheim. No? Well, look in your aquarium, you probably will find an Eheim there; they are the most common pumps around. 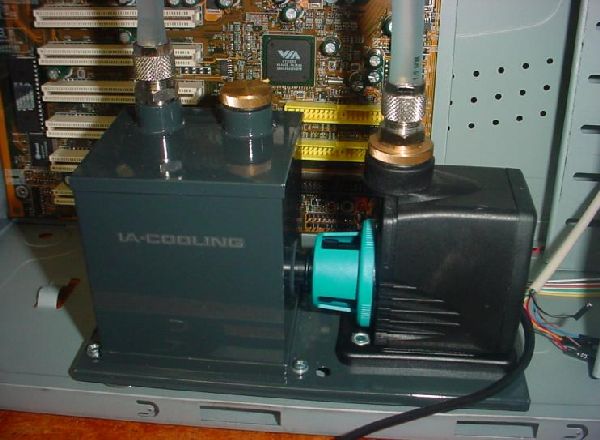 Attached to this pump is a cubic reservoir, which is made out of the same brass as parts of the water block. The reason I know this is because when installing the setup several times in the most dim-witted ways (stupid-user testing) I bumped it against the side of the case, and the paint came of like its was kiddies-paint. Brass appears to be less paint-able without some kind of base layer. 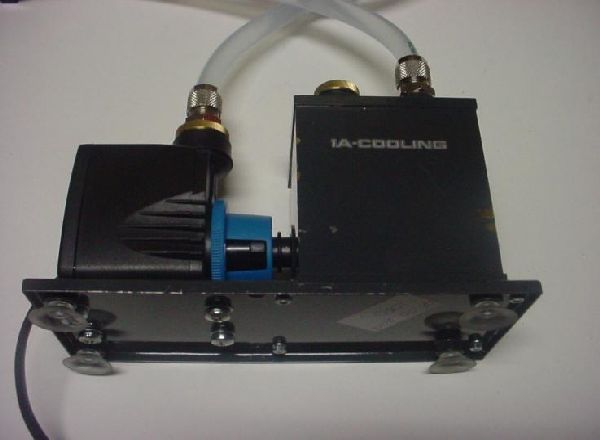 One reservoir (with pump attached): check