Full tower cases are usually needed by end users that needs tons of storage capacity. Or by watercooling fanatics that need adequate space to house all of their huge radiators. Sometimes you don't have any option besides to go for a full tower case, as your motherboard's size is out of proportions. A few of those particular motherboards might be Intel's Skulltrail, eVGAs SR2/3 motherboards or even Gigabyte's X58 UD9. Due to their XXXL ATX size, only full towers need to apply for the job.

Todays Elysium is Xigmateks high end full tower chassis, ready to take on any big size motherboard you throw at it. Fully ready to be fitted with your favourite watercooling gear. Looking at the specifications, most options are well covered. Loads of storage space and ventilation are straight warranted out of the box. Time to open that freaking huge box and have a look at this full tower offering.

A small word about Xigmatek : Founded in 2005 and with main target to become one of the world leaders in the thermal PC industry. It's main engineering team is german, reknown for clever and durable technology. Though the factory is located, where else then the centre of PC hardware, Taipei City, Taiwan.

Elysium apparently means : "domicile of the blessed Roman Empire, sourrounded by own stars and a sun". I have no idea where the Xigmatek marketing guys get them from, but you have to admit they are pretty original. 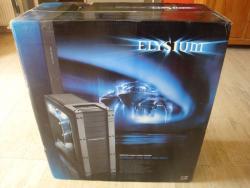 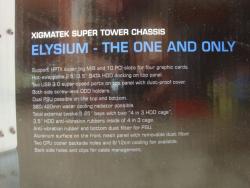 The box art is in true Xigmatek style, flashy with a firm fantasy theme. The tower is well protected by the cardboard box as our sample arrived in impeccable condition. Even though the local transport firm hasn't been carefull with it as the box was seriously dented and showed some severe cuts. 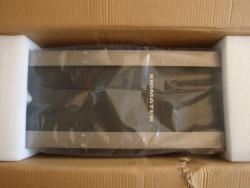 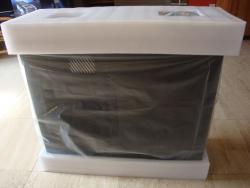 Being a full tower case, measuring 230mm in Width, a Height of 618mm and 663mm in Depth. Due to it's huge size it can house up to 12, yes you read right, up to twelve 5.25" devices. For the Hard drives Xigmatek included 2 removable hard drives. Up to 4 Hard drives per cage can be fitted. 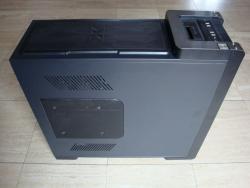 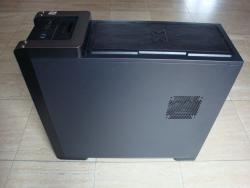 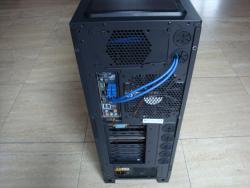 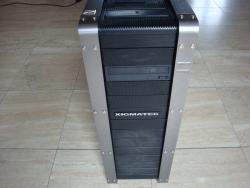 Two powersupplies can be mounted, this in case you ever opt to go for Tri or a Quad SLi and one powersupply wouldn't cut it. On the rear you can spot the seven rubber holes to guide the watercooling tubes. Time to have a look on the inside.

A lot of cutouts in the motherboard tray. Either for easy cable management or to have quick access to the rear of the motherboard to (re)mount a new cooler The big CPU cutout on the right hand side is to support the eVGA SR2 motherboard. 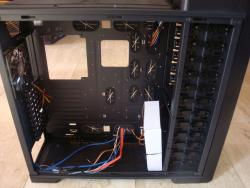 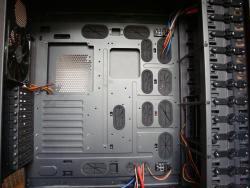 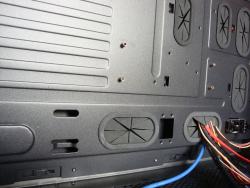 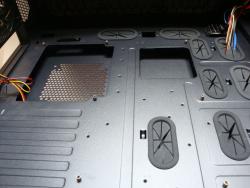