We pour some -180°C LN2 over NVIDIA´s 40nm GPU to see how high it will scale. With the help of some voltage modifications we are ready to breach some world records at the low end of the video card scale.

I know, I used to write these kind of overclocking adventures all the time, but since the work at hwbot.org is stacking up I find less and less time to do what I really like to do: overclocking. Although many people do not know this, I tend to see the HWBOT Overclockers League as yet another competition I can play in, however, not the absolute most important one. No, for me the entire concept of the bot is just one great playground: give me an Athlon XP and I'll try to push it, using LN2, past previous world records. Anything, from low-end to high-end, that can be overclocked will be overclocked when it passes my hands.

In any case, as mentioned previously, I haven't written an article of this kind in quite some time and over the few days/weeks I realized that ... it's just a lot of fun. It's just fantastically interesting!

The card I got my hands on today is the Leadtek Winfast GT220, which is a low-profile video card. The review of this card has already been published by my colleague:

Leadtek is one of the launch partners of NVIDIA, they had their Winfast Geforce GT 220 version ready at launch, their version features some interesting changes from the reference design, while they don’t necessarily change the performance, they do offer some advantages, but unfortunately also some disadvantages.

The low profile PCB makes this card an ideal candidate for a HTPC setup, with the HDMI and DVI outputs. The card draws less power than the older 9500 GT, we’re talking ~10W under load, not earth shattering, but every Watt counts when you build a system that will remain powered on for many hours. Add in HD video acceleration, CUDA support and this card becomes more attractive for HTPC owners. (Do keep in mind that there is no audio pass-through for HDMI). Now if only that fan would run slower and make less noise! 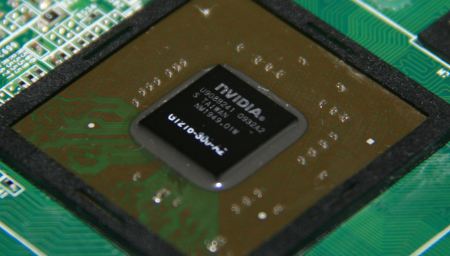 Not that it is of any importance to the overclocking article, but it's good to know we shouldn't be expecting too much of this card in terms of performance.

I'm actually tempted in buying another GT220 to check for overclockability :-)
Comment from Kougar @ 2009/11/16
Interesting read.

Since the memory chip temperatures are obviously holding the core/shader speeds back, wouldn't it not be very hard to jury-rig an inverted peltier block, hot side on the chips? Wouldn't take very much, adjust the peltier voltage as needed to keep them just above zero centigrade... perhaps with a pot that allowed extra spacing. Or direct heating the other side of the PCB directly underneath the memory solder points, sort of like an inverse waterblock for the memory if it could be insulated from shorting.