You can find them in nearly every variation you want: black, white, pink, robust, ultra-light, slick, mat, ... but deciding which one suits you best, performance and style wise often is not an easy job certainly if you are trying to integrate these into your living room environment. HDD Enclosures, that is what I am talking about and today we have a look at an 3,5inch IDE/SATA enclosure offering by Vizo.

You must admit, when USB first set foot upon earth there was not anyone thinking about how much more possibilities men really had created. You can't get around it nowadays and the list of USB compatible devices seem to be endless. USB fans, heaters, memory sticks, floppy drives, keypads, mice, printers, license keys, sound cards, ... and HDD enclosures off course! The comfort of having a fast and easy connectible but yet good looking solution to backup most of your precious computer data and pictures has now become reality, though the competition is on and the question "what to choose?" becomes asked more frequently day by day. Today we're having a look at the Vizo Luxon Advanced LXE-350 HDD enclosure for 3,5" IDE/SATA hard drives, have a look at the product sample we received: 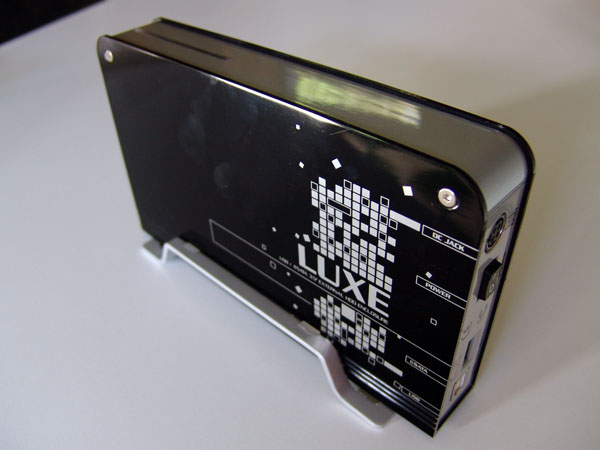 The LXE-350 is at the moment of writing no longer the newest Luxon HDD enclosure, that doesn't mean you should ignore it of course. Round etches and high gloss polish gives the Luxon its slick looks which doesn't really jump into the eye, modern side drawings make it perfect to integrate in nowadays designed offices and living rooms, but its appearance is good for all-round users too. 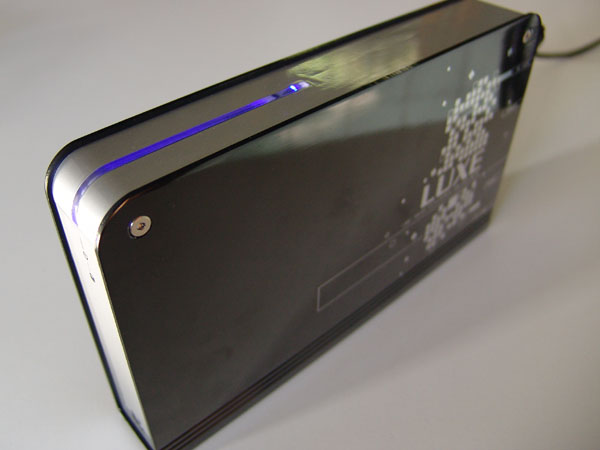 The body is made of aluminum and is absolutely light weight, and small compared to some other HDD enclosures which makes it easier to carry. Aluminum means low heat resistance and thus cooler running hard drives which excels the lifetime of the drive. The LXE-350 comes with an aluminum stand with soft rubber feet to keep the drive at the right place inside the Al-stand, unfortunately these rubbers aren't attached to strong and after few times in- and uninstalling the drive into the stand I seem to have lost one of the four rubbers making the HDD enclosure body vulnerable for scratches. The HDD activity indicator is large and easy to spot, on the picture below you see it lightened when the enclosure power is present. Accessing the external drive will make the indicator light up in purple as there have been 2 LEDs build in. The body is hold together with nothing more then the four small screws you see on these pictures, after removing them you'll be able to pull out the grey body where another 4 screws are used to tighten the hard disc. All together installing the hard drive goes absolutely fast but does not always seem too steady, probable because of its light weight I presume. 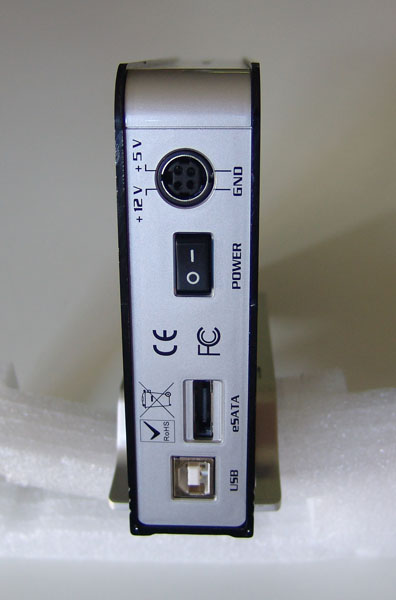 Inside you'll spot a IDE/SATA converter chip... yes, that's right, both interfaces are supported by the Luxon Advanced LXE-350 enclosure. Funny twist though with the new products in the Luxon Advanced series, they have less stellar features then this older enclosure. On the back of the device you'll find a 5V/12V DC power connector, as well as a mechanical power button, an eSATA 3G port and off course the USB 2.0 port which allows to have 4 different combinations attaching your external data, have a look: 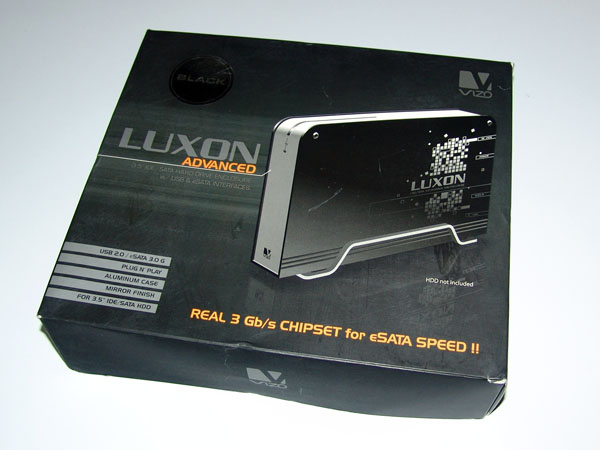 Nothing fancy, the package, what matters is what's inside: