Last weekend Madshrimps was the main guest at Alternate; two of our experienced overclockers demoed their skills during live overclocking sessions. On Friday CPU speeds over 8Ghz were reached, on Saturday video cards were tortured. Read on to find out if world records were broken.

Time to break some records.

In for a world record ?

On Friday and Saturday, two of Belgians' finest overclockers went to Alternate. Friday Blind represented Madshrimps, on Saturday it was Massman who did his job. Both trying their best to reach the highest frequencies and scores by pushing the hardware to the maximum.

Massman had some bad luck. The Intel E8600 setup he brought with him worked fine at 6,4 Ghz at home, but on location he got it barely stable at 6,2 Ghz. After hours of fine tuning he decided to run the system at a mere 6,1 Ghz. Using a modded Nvidia 9600 GT he as aiming to break the world record 3D mark 01 in that cards' category. He cooled the video card with LN2 which helped overclocking quite well, benching at 1050 Mhz core and 2100 Mhz Memory wasn't a problem. It were the shader clocks that were holding him back. Nevertheless he achieved a very nice score of 95150 Marks. Not the world record, but a respectable (3rd place out of 100+ scores. 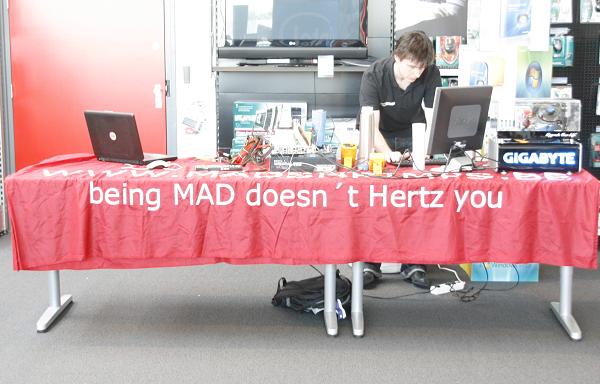 On Friday Blind was very close to a world record, highest CPU speed ever…


On Friday he started preparing the bench table and his setup. Using gum to fill up the gaps around the socket to prevent condensation, installing the CPU and the cooling tube, he was ready to start benching. The highly rated Dragon F1 Extreme Edition LN2 Cooler made by K|ngP|n was used.

As he is a man of little words, he didn't write a step by step guide, he just started pouring the liquid nitrogen. Some time later we heard rumors that he achieved some nice scores, but we had to wait until blind himself got home and online.

The cpu comes with a stock frequency of 3,2 Ghz and a bus speed of 133 (533) Mhz. On air the chip did about 5,7 Ghz (+78%), on the cascade phase change cooling speeds of close to 7 Ghz(118%) were reached, but the LN2 pushed the chip over the 8 Ghz barrier. To achieve this, the CPU was fed close to 1,9 Volt. Pushing it higher wasn't possible, as the overvoltage protection wasn't bypassed yet on this motherboard. But already a high voltage, seen that the stock voltage is around 1,3 volt. 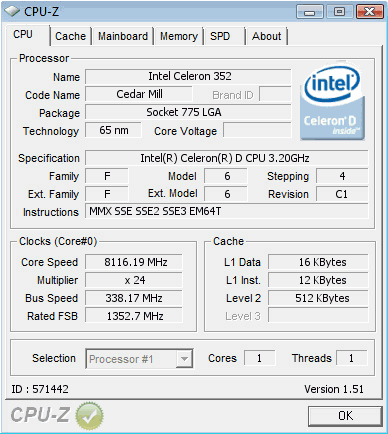 This is not a modified screenshot, proven by the Validation link.

This result is the second highest clock speed achieved as listed by HWbot! 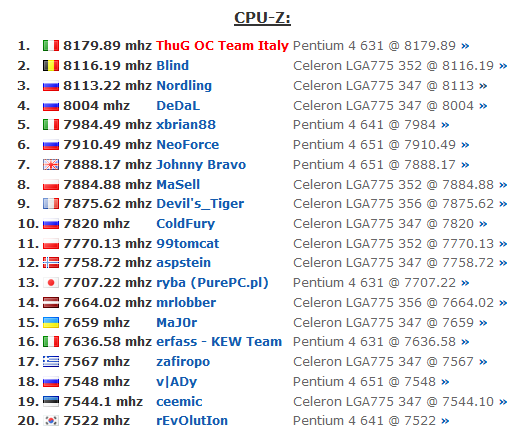 Comment from Expat GriZ @ 2009/05/26
Hey Guys, I just live around the corner from Alternate!! If I wasn't stuck offshore I would have been there. Congrats to Blind & Massman on the achievments!!

fun to drop by

They think the Celeron was bought at Alternate off the shelve at random. I have a feeling this is not quite true

didn't touch a motherboard the past 3 years....

maybe in the future who knows ...

And you ? or building a house might be a little bit more important