Today we have a guest article from Martin who tested 30 different 120mm fans when mounted on a water-cooling radiator. He measured generated noise, cubic feet per minute of air moved with each fan, allowing for some impressive comparative result charts. If you arere looking for a 120mm fan upgrade, this article is a must read!

Today we have a guest article from Martin (from XS) who tested 30 different 120mm fans when mounted on a water-cooling radiator. He measured generated noise, cubic feet per minute of air moved with each fan, allowing for some impressive comparative result charts. If you’re looking for a 120mm fan upgrade, this article is a must read!

I'm purposely measuring noise point blank range at the fan to maximize resolution on the measurement. I wouldn't worry about the numbers as much as the relative differences, my meter may be in need of calibration too, but it's what I have so it's what I'm using.

I don't understand noise well enough yet either, so I'm just measuring at the hip. It's obviously interesting how a 30-40dB spec fan can produce over 70 at close distances. Also my ambient noise level hovers around 47-50db. I'm leaving my regular PC running in the background so that all the measurements I run have about the same ambient noise level. I think this may be more important than trying to measure in total silence which in itself is near impossible to do (on a budget). 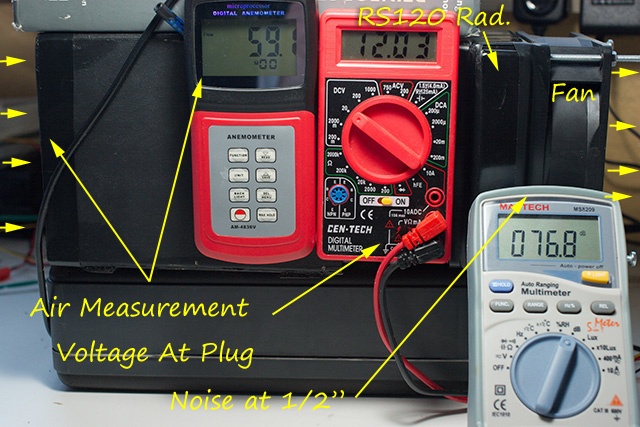 Comment from Rutar @ 2009/05/19
impressive testing, now even with power consumption but:

The chart is too hard to read, you need to make additional charts for groups of 10 fans. Of course, if someone could code it so you can select several fans and then the chart would be created that would be best. Don't let great test data go to waste because of the presentation.
Comment from leeghoofd @ 2009/05/19
Welcome onboard Martin !
Comment from jmke @ 2009/05/19
it was a one time guest article

Martin's main focus was water cooling gear; this was his final big group test (until the bug bites again

his site is at http://martin.skinneelabs.com/ where you can find plenty of water cooling reviews
Comment from jmke @ 2009/05/19
Quote:
will see what I can do, he send me the source file; don't expect a database just yet, but different presentation is doable I think; although X/Y scatter charts are still the best for this; problem is that the Legend is hard to read
Comment from Rutar @ 2009/05/19
Quote:
They type of chart is not the problem, it is just that because there are so many similar looking graphs that its hard to tell which fan is which graph.

if they would be groups of 10, the problem would be smaller even if those are groups of similar performers.
Comment from jmke @ 2009/05/19
will have to re-arrange the data for this to work; will take some time, don't expect it before next week