Cooling down Intel´s latest CPU with air cooled heatsinks is fine if you don’t plan on extensive overclocking, once you want more though you will have to look for better cooling solutions. We take a look at seven CPU water blocks from EK, Enzotech, Koolance, OCZ, XSPC and Swiftech to see if they can tame the i7 heat monster, also known as Nehalem. 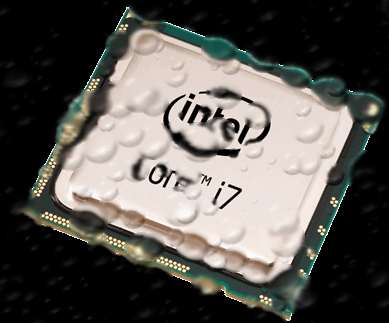 Like always each article needs a small intro to answer some of the usual questions: Why, how, what,... I think you get the picture ( we reviewers know you readers are far smarter than us ) I'm the proud owner of a Nehalem based PC. It allows me to do awesome stuff at tremendous speeds. Nehalem is pure brute force and when overclocked requires a nuclear plant to power it. This goes along with big heat output. More heat than some air coolers can handle.

My computer is being abused daily for benching, folding@home, gaming and loads of other things my girlfriend loathes. Previous rigs of mine were always water-cooled and since I got the Core i7 I saw that some manufacturers didn't really alter the design of their socket 775 coolers. Just another top plate, revised mounting system and (if included) a new back plate made them socket 1366 compatible. Madshrimps contacted the vendors to see who was interested in participating for an I7 roundup. At first hand we only got the blocks included in this review, but new contacts should allow us to get a few more samples soon ( hence why they will get their one ticket to stardom in part 2, out soon).


Testing water-cooling equipment is very hard to do as so many factors play a part ; The mounting , Tim used and how it was applied, ambient temps, tubing used, pump speeds, etc...

Comment from Kougar @ 2009/05/22
Apogee GTZ has problems... screwing it down can grind off a layer of motherboard PCB if the person doesn't tighten with fingers only. The GTZ LGA1366 backplate is extremely easy to strip the threads on as well.

Starting to wish I had gone with the D-Tek block instead.
Comment from leeghoofd @ 2009/05/22
I only used my fingers the tighten down the GTZ screws. Normally you can only tighten it as much as the backplate allows, unless using brute force. Do you have any pictures of your damaged backplate, mobo ? You can always ask for a replacement plate. I'll pass the info at Swiftech if you wish.

One of my screws was a bit damaged and I needed to some abrasive sponge to clean its thread. Then a drop of oil in the backplate and now it went in 100%

Performance wise I have my doubts if the Fuzion v2 is better then the GTZ (sadly I never got a sample, D-Tek never responded once)
Comment from Kougar @ 2009/05/23
Wasn't trying to brute force it, just tighten until the screws "lock"... but apparently they don't lock with this choice of backplate. On the Apogee GT they "lock" with the old style mounting mechanism.

The Apogee GTZ LGA1366 backplate does not fit well on Gigabyte boards, the foam inserts overlap three solder points on the Extreme/UD5/UD4 models and prevents the backplate from sitting flush. If you remove the foam then you will short out the socket. Instead I stripped the threads on one corner of the backplate and scratched up the PCB in three corners trying to get a flush, tight mount.

I do not have photos, but that is a good idea. I appreciate your offer but I am planning to write Gabe personally, in the very least I'm not paying another $10 + shipping for a stupid backplate design. I don't understand why there are clear plastic washers on the backplate, but not on the underside of the mounting screws to prevent shorts/PCB damage.

I am using the Thermalright LGA1366 backplate kit right now... much better design. The screws also "lock" into place and cannot be overtightened and they do not touch the PCB at all. It also fits fine and does not have issues with the solder points.
Comment from leeghoofd @ 2009/06/12
Sadly I don't think their wil be a follow up to this test as we haven't heard anything from Aquatuning since end of April ( to get some european samples ). Samples were being readied, but no reply to any mail requesting a status update... bummer

Comment from Kurgan @ 2009/06/12
OT but I'd love to see a review on Primochills new TYphoon III. Any chance we can see one in the near future?
Comment from leeghoofd @ 2009/06/12
We asked for a corsair L50 sample, looking forward to give that one a go