Memory manufacturers were quite well represented this year at Cebit. SSD drives captured most of the spotlights at the memory manufacturers´ booths, but we did see a lot of interesting DDR3 products as well. Have a look at the most important memory products at Cebit 2009 in the following roundup.

The world is in a crysis, or so we hear. We hear about lay-offs all over the planet, with companies struggling to survive. First budgets that get cut in many places are the ones for R&D: Research and Development. You and I know that it's R&D that PC business strives upon, innovation is the key word. Give people enough incentives to buy is the trick, and one of the most important forums for those incentives are the yearly trade shows : Computex, CES, and of course Cebit...

True enough, some signs of crisis have been trickling down to Cebit as well : Hall 21, home to many of the prominant IT manufacturers for many years now, wasn't filled up completely. I'd say 15-20% of the show floor was not rented. Visitor count reportedly is down as well, by as much as 15%. What this means for next year's trade show(s) remains to be seen, but I have to say that, for the PC enthusiast, Cebit remains a true Walhalla. No reason to give up on our favorite hobby because some say there's a crisis going on, right ?

This small roundup is all about memory, and its derivatives. These derivatives have become the star of 2009 already, and will continue to grow more important still : I'm talking about SSD's or solid state drives of course. True innovations on the memory front were not really present, it was more evolution than revolution this year. However, most memory manufacturers were present, and we had nice meetings with nearly all of them. Let's start at OCZ's booth...

OCZ did not have much to show on the memory front, no new announcements were made on the DDR2 or DDR3 front. Of course, they are already at the forefront of DDR3 with their recent Blade series, featuring the new low latency Elpida chips. All was centered around SSD performance though, as we showed on the preview of the OCZ "Z-drive" we talked about here

Apart from that prototype, 4 models of SSD drives were shown: Summit, Vertex, Apex and Solid. 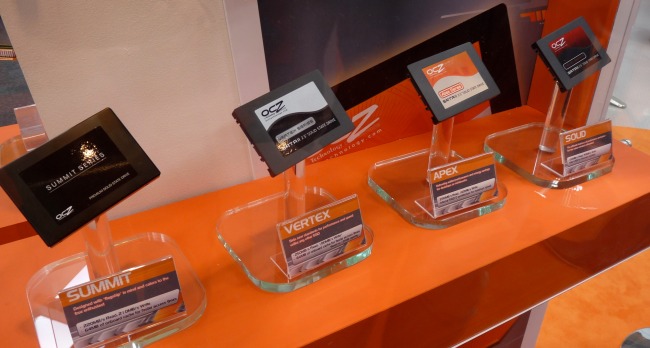 Of these 4, summit is the new star, for the time being the most high-end SSD drive OCZ delivers. 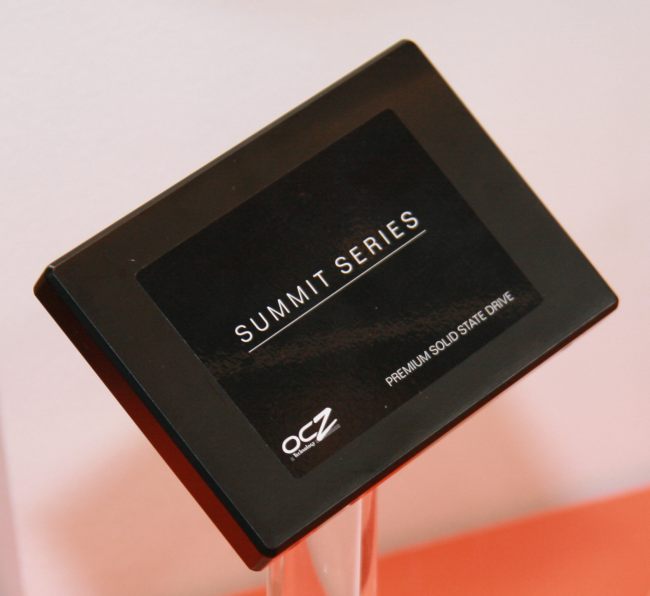 As the label says it's their flagship model featuring unprecedented write speeds of 210Mb/s in a single drive. 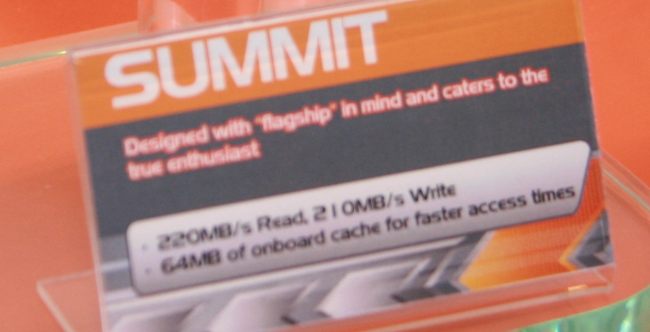 Onto Corsair now ->
Comment from Kougar @ 2009/03/12
Quote:
More rebadges I guess? Kingston already sells them.
Comment from jmke @ 2009/03/12
but A-DATA also carries their own MLC product lineup?
Comment from Rutar @ 2009/03/12
I don't understand that Intel cannot use the same sales channels for their SSDs and CPUs. I expected them to overrun all other brands in availability (which matters a lot) due the fact that they are Intel. Someone has screwed up.