OCZ will be launching an SSD based product later this year which promises never before seen performance, 600mb/s read and up to 500mb/s write will not be out of the ordinary. We got a chance to do a few performance tests at Cebit this year where they were demoing a 1000Gb version.

OCZ has been on the forefront of the SSD revolution, with their affordable Core (v1/v2) series they have made a name for themselves, and lately with the performance previews of the new Apex SSD which features internal RAID-0 they are aiming to strike a balance between price/performance higher than the competition.

Using RAID-0 with SSD they quickly hit a bottleneck when using a SATA300 interface, with the next SATA interface speed bump still a few months away, they looked into an alternative method to squeeze more performance from a SSD RAID setup. Using a hardware based x8 PCI Express raid controller and 4x250Gb SSDs in RAID-0 they can offer an out of the box 1TB super speedy drive. PCIe 1.x x1 offers 250mb/s throughput, so their x8 card on a first generation PCIe motherboard has a theoretical limit of 2000mb/s, so there’s some headroom left!

They are using a ~$400 Highpoint RocketRAID 3520 PCI Express RAID card with 256Mb of DDR2 ECC memory as the local cache, and four MLC SSDs. They rate the Z-Drive as follows:

Those are some extremely high figures, double of what the competition is currently offering in best case scenarios.

The physical drive doesn’t look like an SSD or HDD at all, since it’s based around a PCIe raid card it looks a lot more like a high end video card, size, depth and height wise! 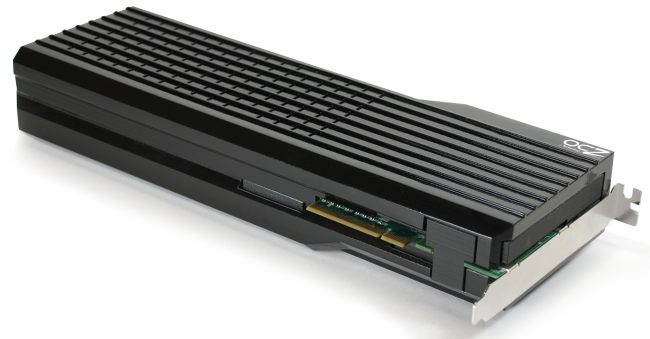 Installation is plug and play, the only thing you’ll have to do is install the raid controller’s drivers in your OS of choice. 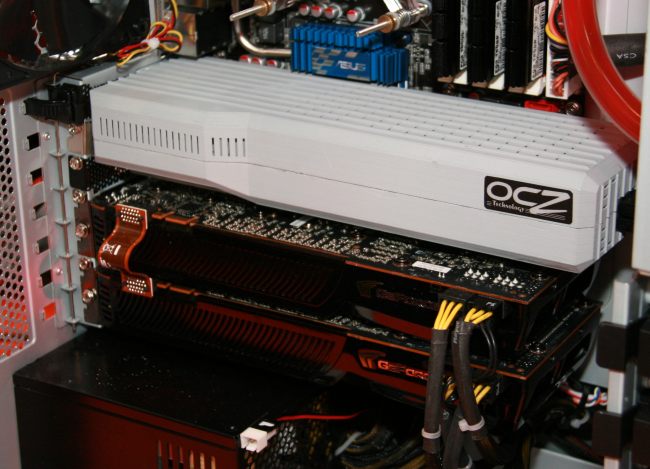 We only had a short time to play with the card and it was on a public booth using a OCZ configured system, the specs were:

It’s definitely not the most affordable system out there, but taking into account that the target audience for the Z-Drive will be very high end, it does make sense to match it with the appropriate hardware.
Comment from Kougar @ 2009/03/05
Insane! That thing is larger than even the largest GPUs.
Comment from jmke @ 2009/03/05
It won't fit in mid-size cases, unless you hack the casing, but at that price point you should be able to afford a nice large case too

Comment from Kougar @ 2009/03/05
Is it even bootable? Was the OS running off of the drive? The last PCIe SSD configurations I heard about were not capable of booting from.
Comment from piotke @ 2009/03/06
It's like booting / running windows from a raid array from a plug in card
Comment from Kougar @ 2009/03/06
Quote:
Yes, but as I recall the first Fusion-io card was the same thing, but could not be used as a bootable drive due to some reason or another. They said future models would have the problem solved.
Comment from thorgal @ 2009/03/06
You do need a driver for it to be bootable, but other than that it should work. The one on display was not a boot drive though.
Comment from jmke @ 2009/03/06
it was not used as the boot drive so you could do write tests on it, reformat it with different stripe size etc... it's perfectly bootable, it's after all a Highpoint Rocketraid PCIe card where you hook a few drives up to.


during Windows setup hit F6 when asked and provide a driver disk and you're good to go
Comment from colt357tw @ 2009/03/07
yup jmke is absolutely right on this, all you need to do is setup BIOS to boot from PCIE RAID card
Comment from Faiakes @ 2009/03/10
Now, THAT is the ultimate OS drive (not bloody Vertex...)