We take a closer look at a speedy laptop 2.5inch hard drive from Western Digital. Spinning at 7200rpm and with 16mb cache onboard it promises to be quite speedy. While not very cheap it does beat new SSD devices by a large margin, 320Gb of fast compact storage for your laptop? Let us put it to the test.

Sales of netbooks, laptops and desktop replacements has been rising these last several years, in 2008 we even saw the scale tip over in favor of these portable computers. Most of these devices share the same processor, video card and chipset technology as their desktop counterparts, delivering performance almost on par. The overall speed of a PC is determined by its slowest component, inside laptops this has been the hard drive, due to space constraints manufacturers have to use 2.5” (and even 1.8”) sized drives, which reduces the storage space as well as speed compared the desktop 3.5” disks. With the introduction of the Solid State Drives in 2008, we should be able to overcome this bottleneck in our portable PCs, unfortunately pricing is still quite high and disk size is limited to a fraction of what the good old hard drives are capable of.

In this business world every penny saved is a penny won, so you won’t see any SSD in entry and mainstream laptops just yet, instead you do get larger drives which can store up 500Gb inside a 2.5” HDD housing, impressive to say the least.

We tested a business grade Dell Latitude D630 laptop with three different 2.5” hard drives to see how much it would benefit from a HDD upgrade. On the Dell site the default configuration costs $1243, it comes with an 80Gb 5400rpm 2.5” HDD. Dell gives you the option to upgrade to a 7200rpm model for $40 which is definitely worth it. You can also go for an SSD, but the cheapest will set you back $450 and it’s only 34Gb… not really a good deal. They also have a “128Gb Mobility Solid State Drive“ listed for $460, which can be any MLC based SSD. 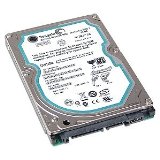 We wanted a lot more storage on this laptop than was offered by the 80Gb Seagate, Dell only offers upgrades up to 160Gb so we had to look elsewhere. In a local shop we picked up two 2.5” drives from Western Digital, one Scorpio 250Gb and one Scorpio Black 320Gb

Specifications Scorpio Black
With 7200 RPM spin speed, 16 MB cache, and capacities up to 320 GB, these drives enable you to have the best of both worlds: the capacity and performance of a desktop PC with the convenience and portability of a notebook.

Specifications Scorpio
With 5400 RPM spin speed and 12 ms access time and up to 3 Gb/s SATA interface speed, even the most demanding customer will appreciate the performance achieved by WD Scorpio Blue drives.

The Scorpio Black is top of the line performance drive, 7200rpm and 16Mb cache, it matches and surpasses the specifications of many desktop hard drives. The Scorpio (none-black) spins at 5400rpm which is considerably slower so it’ll be interesting to see how it stacks up to the competition.