Devil May Cry 4 is the fourth installment of the Devil May Cry series. It was announced in March 2007 that the game would be released simultaneously for the PlayStation 3, Xbox 360, and PC. In the game, the player controls both Nero, and Dante, the game's protagonist and the series' title character respectively and fights enemies in close combat using firearms, swords, and other weapons. The characters Lady and Trish from previous games in the series make appearances, along with new characters Kyrie, Credo, Gloria, and Agnus.

The game has both DX9 and DX10 render mode. We’re using the freely released performance benchmark of Devil May Cry 4. 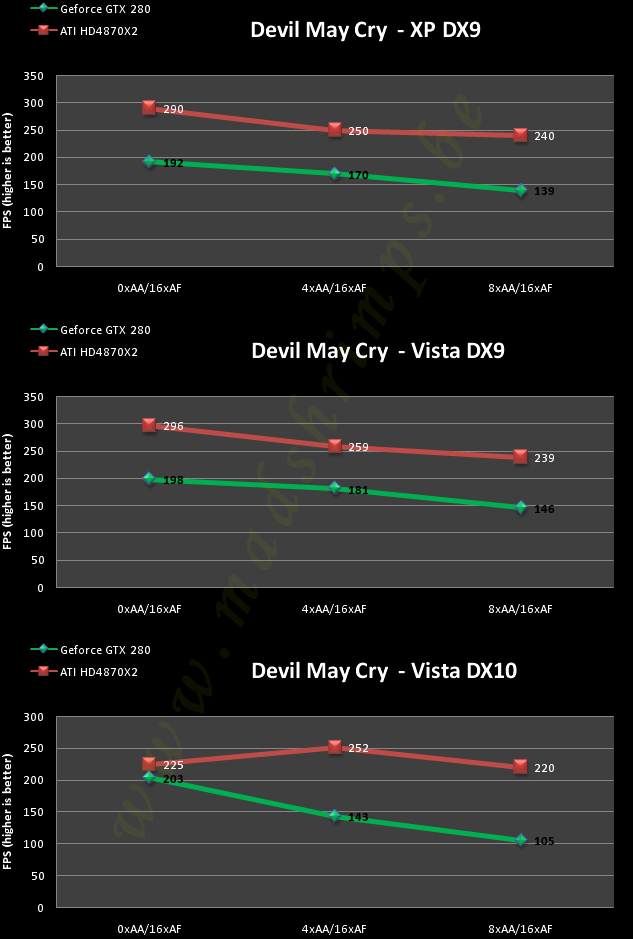 Going from XP to Vista using the DX9 render path doesn’t show much difference, choosing the DX10 render path did give a strange outcome with the HD 4870 X2, we repeated the test several times, but performance without AA was lower than 4AA. This did not happen when using DX9.

AA scaling is in favor of the Geforce GTX 280 when going from 0xAA -> 4xAA using the DX9 render path. In Vista with DX10 the GTX 280 doesn’t handle the extra rendering load very well.

The HD 4870 X2 never goes below 200 fps, even when using 8xAA, which is quite nice to see, going from 0xAA to 8xAA drops performance by ~20%, but with such high FPS numbers you won’t notice this.

For a detail view of the results, with AA scaling and XP -> Vista Scaling see this table