We test two 9500 GT cards, one from Leadtek and one from Galaxy. We share with you our preliminary findings with these two sub $100 video cards who aim to take the performance/price crown at the entry level. Can these cards impress? How do they stack up to the 9600 GT and 8600 GT read on to find out.

Nvidia has released the G96 graphics processor, which is featured on the new low-end graphic cards like the 9500 GT and later on this month, the 9400 GS. Unlike most of us would think, the 9500 GT is not the successor of the 8500 GT, but a newer version of the 8600GT, which was the first real middle-end solution in the GeForce 8 series.

This, however, puts us in a weird dilemma: how should we see the 9600 GT then? It's not the successor of the 8600 GT and it's slower than the 8800 GT, that would make the 9600 GT a lousy successor. Nvidia's nomenclature has been misleading since the disastrous GeForce FX series, in which Nvidia had to introduce a new high-end card, namely the FX5900 and FX5950 on top of the actual first released top card, the FX5800 Ultra (reviewed on 2003-04-28), because the first top-card was too loud, too hot, too expensive and a very bad choice performance-wise. Coming to think of it, even in the late days of the GeForce 4 series the nomenclature took a weird spin. We all remember the Ti4600 as being the high-end card, but later on, the Ti4800 and all sorts of other side-products were introduced, most of them released because of the new standard: AGP 8x, but lacking any real performance boost. 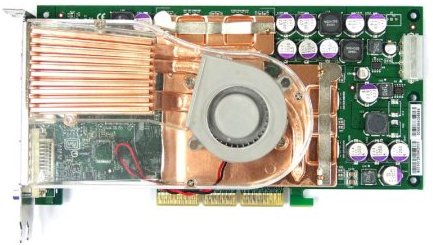 The FX5800 Ultra, of which the 'Features and benefits' page on Nvidia.com leads to a dead end.

Using all types of different names and product titles, doesn't really make it easier for both the reviewers and the buyers. In fact, at this point, people who are not at all familiar with hardware have NO idea which card performs better since it cannot be derived from the product title. Nvidia shouldn't have switched to the GeForce 9 series, they shouldn't have switched to the GeForce GTX series, no, they should have put all the cards in the GeForce 8 segment and should have named the GTX280 an 9800U. Thát would have made things more clear.

Back to the 9500 GT, which is supposed to be the new 8600 GT(S). I have already reviewed the 8600 GT and, unlike many gamers, I wasn't that unsatisfied by the card. Of course, it didn't give high FPS in most games, but it was good enough to run the newest games on lower resolutions and didn't make me spend a fortune on one graphics card. The GTS version was a higher clocked card with faster memory, not much of a difference really. The 9500 GT is supposed to be better because of its die-shrink, as the card will be produced in both 65nm and 55nm. Less hot and less power consumption, in other words.

Both Leadtek and Galaxy were more than happy to send us a sample of their GDDR3 version of the 8600GT 9500GT. Due to a lack of time and hardware to compare the cards to, we provide you with our first findings, results and preliminary conclusions so that you have a better view on what this card is worth. Further gaming comparisons will be published later on as well as a special overclocking report.