NVIDIA had quite a success with their 8800 video card series; especially their 8800 GT based on the G92 core made its way into many PC configurations. Sadly the single slot reference cooler was not very quiet under load and high temperatures prevent any overclocking fun. Xirex launched their Stealth Full Cover water block which aims to bring excellent performance even with low noise water cooling configurations, let´s put it to the test!

Not so long ago we met George Clarkson at the Xirex booth at Cebit 2008. After a small introduction of their newest products and some chat we came across a very small and good looking water block designed for the NVIDIA 8800 GT video cards. George gave us the opportunity to have a closed-up look of their newest product, the Stealth looks compact but is said to be a great performer. The secret lies in the "small microchannels inside the waterblock", so said George. As I was having the 880 0GT for test run at that moment and it would be quite cool to find out if the Xirex block is up to any good.

The 8800 GT was a popular video card and even now it isn’t that bad of a choice if it were not ATI to have released their HD4850 that is. Non-the-less, most samples should already have found their way to the customer and in that case the retail market is still more or less demanding better cooling solutions. The reference heatsink was made out of small (single slot) cooling fins combined with a not entirely silent fan. GPU core temperature levels went up to roughly 80°C when heavy stressed and so it should be no wonder why some users may replace the original HSF by a high performing water block which can be more silent when combined with the right components. Or maybe you are one of these who voltmod their hardware and overclock it for higher performance, in that case the Xirex water block may also be of interest to you. Anyway, let's start with having a look at what kind of firm Xirex actually is because their name may not ring a bell with most of you I presume.

As part from the Rombus group, Xirex Liquidcooling department is committed in designing and manufacturing the best quality liquid cooling products, addressing a new market segment which is rapidly growing and is demanding products with high cooling performance, noise reduction and easiness of use/installation. Their target is not to only cover the liquid cooling market, Xirex deals with all issues regarding the cooling for Office-PCs, High-End-PCs, Gaming-PCs up to server cooling. This offer is rounded by an extensive range of products, from the automatic, freely scalable fan control up to LCD-displays to use the assigned components forceful and effective.

Here is the Xirex Stealth VGA waterblock as presented during Cebit 2008:

In stores, expect an ordinary box, nothing fancy: 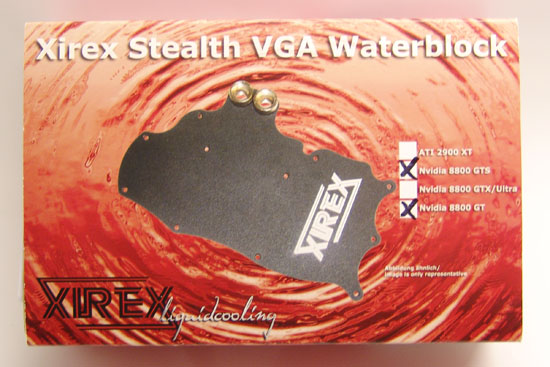 Inside the box you'll find the most mandatory stuff, pay attention because fittings are not being added: 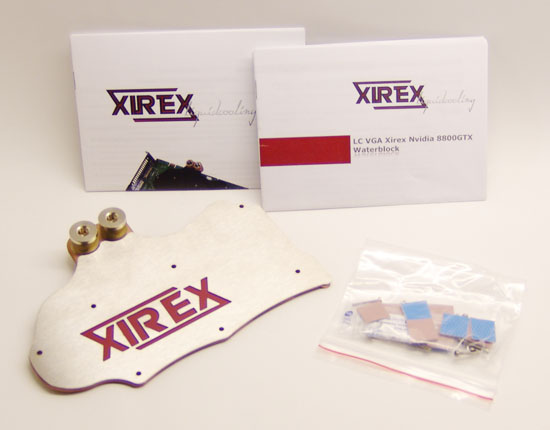 Comment from geoffrey @ 2008/08/15
I received a response from one of our readers stating:


Quote:
Just to make sure I don't get multiple request I will answer the question here in public.

I have no detailed sight on what the exact differences are between the 830 and 850, just in case I've already provided links to the article in which we tested the Leadtek card which is from the manufactory out provided with this heatsink. There you can see to what heatsink we're comparing in this article.

I hope this may be of any help to any of you.
Comment from jmke @ 2008/08/15
what a ridiculous claim made by the author of that email, it just proves he didn't thoroughly read your review since he skipped the part where you linked to the Leadtek 8800 GT product review...