In this article we take a closer look at three solutions from Titan and Scythe which aim to cool your HDD without fans; two of these products, Titan TTC-HD90 and Scythe Himuro also help reduce noise. We combine them with a 10.000rpm Raptor to see if they can handle the heat and noise!

Hard drive temperature and failure has been linked for quite a long time, manufacturers state maximum operation temperatures, while the general rule of thumb for many is “the lower, the better”.

More than a year ago Google released this PDF report regarding their data center hard drive failure rates. They went through the S.M.A.R.T. data of 100.000 hard drive over 5 years. Their findings were interesting to say the least.

The popular assumption between hard drive temperatures and failure rates was not really visible in their data charts. 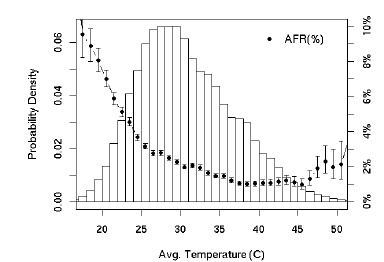 One of our key findings has been the lack of a consistent pattern of higher failure rates for higher temperature drives or for those drives at higher utilization levels. Such correlations have been repeatedly highlighted by previous studies, but we are unable to confirm them by observing our population. Although our data do not allow us to conclude that there is no such correlation, it provides strong evidence to suggest that other effects may be more prominent in affecting disk drive reliability

What this means for the products tested today is that the impact of a temperature reduction doesn’t necessarily mean you hard drive will live longer. Only in extreme situations where you’ve installed a hard drive in a location where there is not much active cooling and the temperature are very high and improvement on the temperature will have a measurable impact on the longevity. Based on the Google chart above we can see that >45°C temperature will cause an increased fail rate. But at the same time, strangely enough, a temperature lower than 30°C increased the failure rate.

If there’s anything that this study by Google teaches us is that the reason for failure of a hard drive is most of the time not temperature related and that another factor is the cause of disk crashing.

Why use third party cooling units for your hard drives then? The main reason would be to reduce the noise, by making use of extra heatsinks the hard drive can be kept cool with less airflow and thus reduce overall system noise. If you are building a low noise setup and have swapped out your standard CPU heatsink and VGA cooler and want to continue reduce noise output, the HDD will need some attention.

Two of the products tested today are build to fit inside a 5.25” bay, which means you’ll have to make sure you have room to fit them; the third product is more compact and can be fitted inside the standard 3.5” HDD bay.