Introduction: CPU Cooling over the years

If you want to go straight to the gritty details of our test today, feel free to skip to the second page. If you want to learn a bit of history regarding air CPU coolers over these last years, stick around.

CPU manufacturers are consistently trying to squeeze more transistors in ever smaller packaging; there was a time when you passively cooled your CPU with a very small aluminum heatsink, only a few centimeters tall. This was back in the 386/486 era; since then the thermal management of CPUs has been more and more challenging as the heat output rose. First we saw manufacturers put small 40mm fans on their aluminum heatsinks to keep the processor running cool.

The Pentium series really got the ball running, when the Pentium 3 was released there were already a few third manufacturers producing custom air cooled heatsinks. But it was AMD first Athlon CPU which caught the attention of the enthusiasts, especially the socket A version of the AMD CPU had quite a nice selection of retail coolers available which allowed you to increase the performance of your processor and still keep it running cool. Noise wasn’t much of an issue back then for most users, strange as it might sound to some, the first high end CPU cooler I bought was a GlobalWin FOP38: 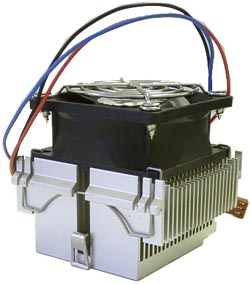 Made to fit both Intel P3 (Socket 370) and AMD K7 (Socket A) the design is not very advanced compared to today’s models. It was made entirely from aluminum with a series of thick fins extruded from the material. The real show stopper was the fan GlobalWin included… a 60mm Delta fan with an insane rotation speed of 6700rpm. I have not yet encountered a more ear piercing cooling fan as this little monster; it delivered outstanding performance, no surprise there, the real kicker was that this cooler was sold worldwide and was in PCs of enthusiasts who did not really complain about the noise. Sure ordinary folk thought we were crazy. I remember firing up my AMD Athlon powered system on the 2nd floor and a colleague of mine who was in the kitchen asked if I started the vacuum cleaner… the kitchen was on the ground floor.

So it seems that at the beginning of third party cooling products manufacturers had free reign about what fan and material they used, as long as the product cooled the CPU better than the competition their product would sell. GlobalWin was challenged by Alpha and Swiftech when the AMD Athlon became more and more popular; these new contenders brought products to the market with a copper base and aluminum fins. You could fit larger fans, up to 92mm and this gave them the edge. 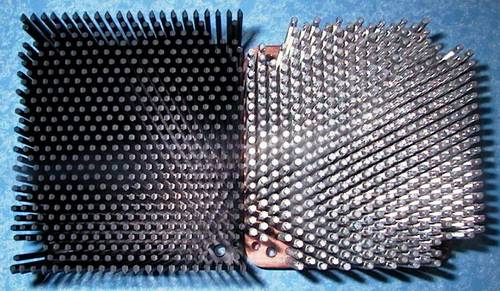 The Athlon XP from AMD was then launched to do battle with the Intel Pentium 4. Both these CPUs offered quite a thermal challenge for then current heatsinks. And so new product version were released by Swiftech and Alpha and they traded placed at the top… until a new contender appeared on the scene. A new upstart in Taiwan called Thermalright was producing copper heatsinks, made from a large series of fins soldered to a flat copper base. The SLK series was born and it left the competition in the dust for several months to come. 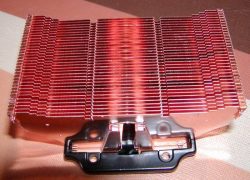 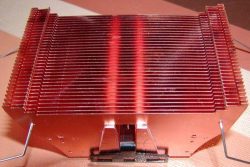 Coolermaster, Zalman, Coolink and other companies jumped on the third party heatsink bandwagon as it started rolling faster and faster; enthusiasts were in for some good times, with many different heatsink designs and copper/aluminum ingredients the prices came down and none enthusiasts started paying attention to those “blocks of metal one put on a CPU”. They were not interested in raw performance, they didn’t even know what overclocking meant. Both AMD and Intel reference heatsinks were average at best and not very silent. Zalman was one of the first to actively focus on silence over performance and their CNPS “flower-design" coolers popped up on the shelves local PC stores. 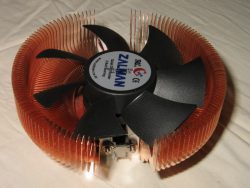 The Pentium 4 Northwood revision was introduced and the scales started tipping towards Intel with more enthusiast buying this new CPU which really scaled well, overclocking with air cooling reaching 100% were previously unheard of, but this CPU could do it. With extra vcore and higher speeds the temperatures also increased exponentially. Thermalright released their latest product, changed the series name and took the performance crown; the SP-94 (P4) and SP-97 (AXP) were their first heatsinks featuring a new technology to help transfer heat from the CPU. Heatpipes became popular overnight. 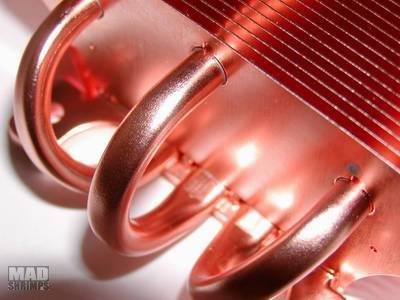 As far as technology heatpipes are as far as we’ve come today; no other technology which improves on heatpipes has been commercialized for use with air cooled heatsinks. Since the SP-94 the size of heatsinks has grown to accommodate the continued increase in CPU heat output. The Athlon 64 series when overclocked offered quite a challenge to cool down without noise and it took quite a bit of aluminum, copper and heatpipes to get the job done.

Amongst the new slew of products was one from a Japanese company called Scythe, their first products included a custom Heatlane technology, similar to heatpipes but it could be bend out of the shape better without performance loss, the downside was the cost of the technology. Their Shogun heatsink was the last one with the Heatlane technology, it supported 120mm fan for cooling and paired with either low noise or fast fan performance was stellar… but the costs were very high for both manufacturer and retail channel. 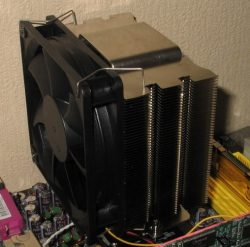 Than 3 years ago Scythe introduced their Ninja and low noise cooling would never be the same; this huge heatsink could fit up to 4x120mm fans, but was in fact designed to be used… without. The massive surface area and low density of the fins allowed the Ninja to keep the CPU cool inside a case which had at least one exhaust fan. 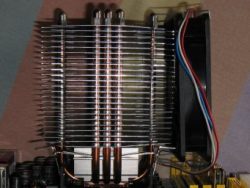 For the last three years there have not been a lot of alternative choices for the Scythe Ninja when it came down to completely passive cooling; Thermalright brought out a HR-01 unit which did ok but could not match the performance of the Ninja. Today we take a look at a new product from Scythe and a newcomer from Coolermaster which is marketed for fanless operation. Let’s take a closer look to see if these product can bring us back to the 386/486 days of passive cooled CPUs ->
Comment from Stida @ 2008/05/23
Nice review.
I've got a Ninja CU, but it's a bit difficult to mount 2 fans on it.
the 'pull' fan touches the cu fins with it's blades...