AMD Phenom X3: One too little or one too much?

The AMD Phenom X2 was announced quite some time ago but still hasn´t seen the light of day; instead we were greeted by the X3 Phenom, a new breed of processor, first in the market to offer a Triplecore solution. This CPU is priced lower than AMD´s own X4 and Intel Core 2 Duo series. In our review today we test the Phenom X3 8450 and compare it to an AMD X4 and Intel C2D.

It has been a while since a real innovation was seen in the processor scene. Everything was just a little improvement of the previous generation, everything was predictable. Until a month or two ago, when we received a little pdf file containing the following slide. 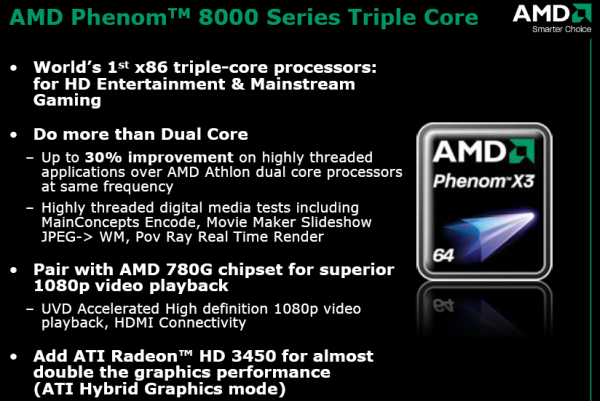 At first, this seemed to be unnecessary: quadcores were already being called too much for the average user and there were enough dualcores available. But then we realized that AMD had something to make up: Intel's 45nm Wolfdale processors were fast and not that expensive and AMD had issues speedbinning the high-end Phenom processors. So, instead of producing slower Phenom X2's, AMD added decided it was time for the world's first working triple core processing unit.

The biggest question however is of course if that third core really has that noticeable effect on the overall performance. We'll find out in this review.

Joe from Didi-trade.be provides Nelson Computers with AMD Phenom hardware for their different PC builds; we got send the AMD Phenom X3 8450 CPU which will be available in upcoming pre-build affordable PC configurations at Nelson Computers

Running at a modest 2100Mhz by default the Phenom X3 8450 will face stiff competition from Intel Core 2 Duo series; 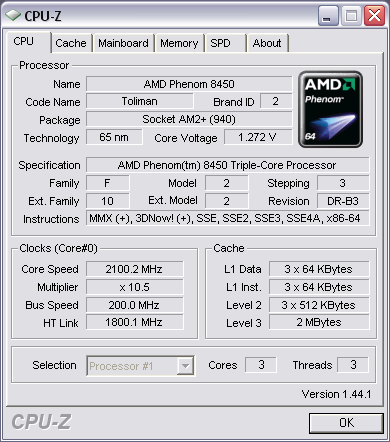