Intel Core 2 Extreme CPU got a special treatment from the Intel thermal management department; a fancy large CPU cooler with 110cm LED fan and copper heat column. How does it compare to the other Intel reference coolers? Is it an alternative for 3rd party heatsinks, let us find out!

The product we’re testing today is not available as an off-the-shelve retail heatsink, it comes with bundled with Intel’s 45nm Extreme processors (e.g.: QX6850) . Its full name is FCLGA4-S which doesn’t make us much wiser.

Intel reference heatsinks haven’t changed much in design since the introduction of the first S478 and S775 processors. They offer a basic performance/noise level, most if not all 3rd party heatsinks offer better performance at lower noise levels so this market has been growing for several years now, we have tested over 150 of these heatsinks here at the site, and even more new CPU cooler solutions are being released at and increased rate.

When we first saw the FCLGA4-S we were quite surprised by its size and design, to say the least, it’s quite a step forward from the previous reference coolers: 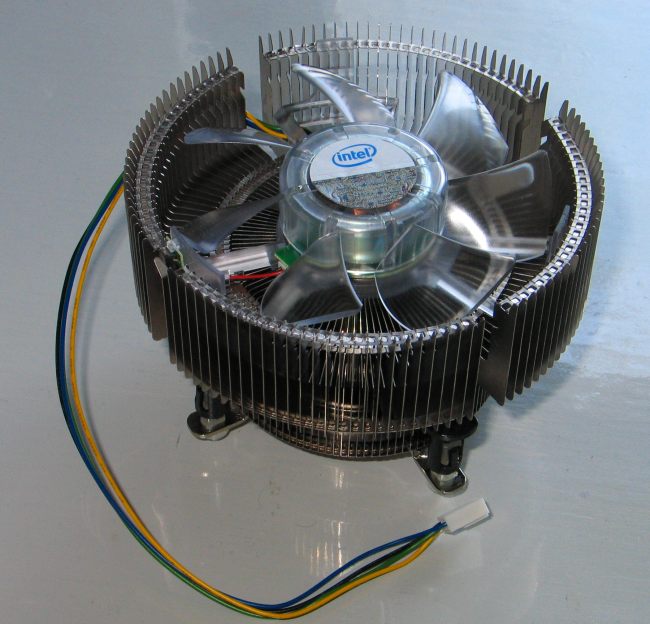 The unit features a custom size 110mm fan with blue LED lightening (!) which is controlled through PWM (1000~2900rpm). When it comes to weight you might be surprised… ~420gram. If you know that the previous AlCu reference coolers weighed close to 450gram and was smaller in size you know something is up.

Our friends at FrostyTech found out what made this new cooler from Intel thick; there is a copper insert alright, but it’s hollow and serves as a heat column; which is a cheaper alternative to the well known heat pipe.

The 41mm diameter copper "thermal chamber" works along a similar principle as a heatpipe, using a working fluid under a vacuum. The low pressure causes the fluid to change states when heat is applied, allowing the vapour to rapidly conduct heat between hot and cold surfaces. A solid metal block by comparison would rely upon the metals conductive properties to move heat from the base and distribute it along the cylindrical walls to which the fins are soldered. 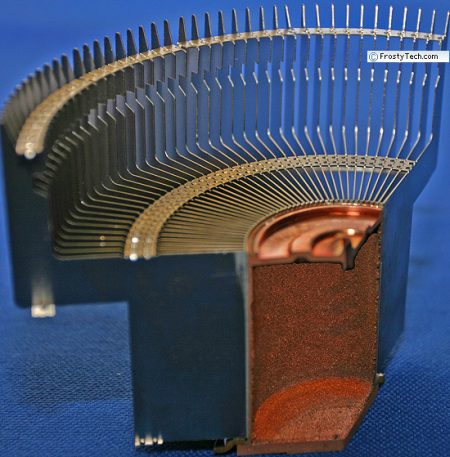 When AMD released their enthusiast grade reference heatsink in 2006 it was able to match some popular 3rd heatsinks in noise/performance; let us see if Intel’s fanciest heatsink can impress us ->
Comment from Sidney @ 2008/07/02
I want one.

Anyway, just food for thought : would the heatsink do better when combined with a 45nm quad core (for which it is intended) ? Heat load would be spread more evenly over the HS with 4 cores... Any thoughts ?
Comment from jmke @ 2008/07/02
most apps are single threaded, which would mean the cores would be loaded differently most of the time, causing uneven heat creation over the HSF base

Comment from Sidney @ 2008/07/02
Just the cooler. I'll be frank that I really find not much of use the way I compute in using quad core.