A Silverstone case with LED lightening in none rectangular front panel? The Kublai series is Silverstone´s entry in the Gaming/Enthusiast ATX case market. Build with less expensive materials it aims to find a balance between price, looks and features. We take a look at the KL03 model in this review to see how it stacks up to the competition.

We have tested several cases from Silverstone these past several years, while the features and sizes and expanded, so did the price, as it increased ever further upwards. Silverstone cases are high quality builds with months going into prototype designs to find the balance between performance, looks, compatibility and price.

No, Silverstone cases are not known for the bargain prices, this leaves them out of the budget and mid-range customers who are not willing to spend hundreds of Dollars/Euros on a computer case. To remedy this situation Silverstone has decided to introduce a separate case series called the “Kublai”, whether or not this name is related to the last Khagan of the Mongol Empire we don’t know.

There are currently 3 cases in the Kublai line-up, we received the most expensive one, the KL03 which is priced at approximately $160, which is still considerably lower than the entry level TJ series cases. The KL01 and KL02 go for ~$120. 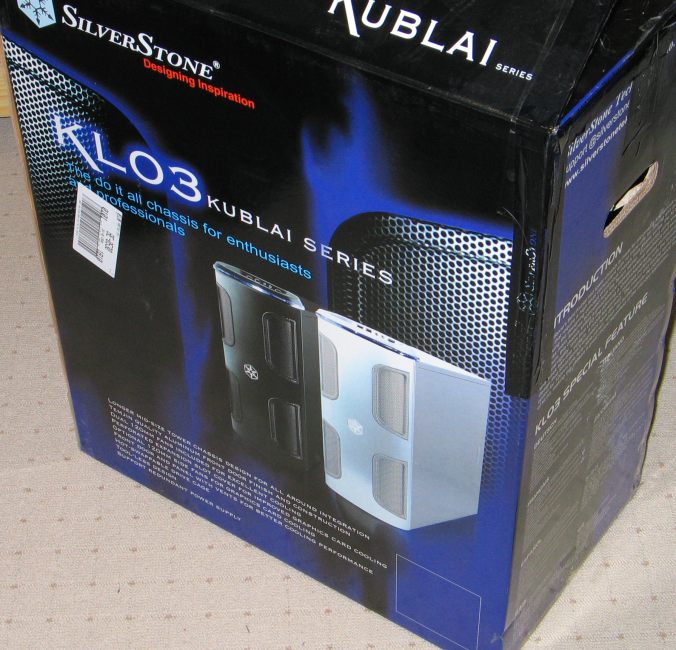 From the box shot we can see the less conventional curve and front panel which is featured on the KL03 which comes in two colors, silver and black. 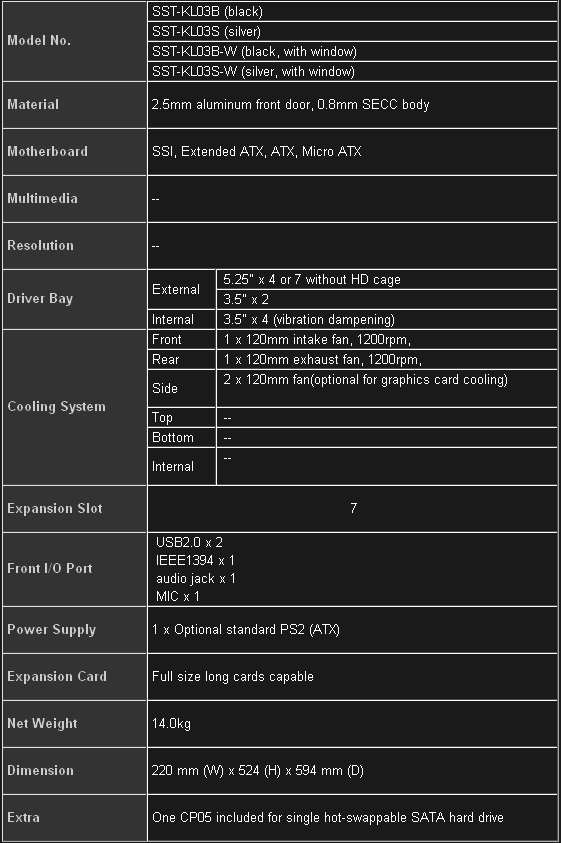 Interesting to note is the use of aluminum for the front panel, but metal for the rest of the case, this make the case not a light-weight at 14kg. You can install up to four 120mm fans for cooling, two come pre-installed with the case. No PSU with the case, so you have to add one yourself. The side panel can be had with a nice window, if you fancy a look inside.

Onto the size comparison and closer outside look ->

Here is my review of the Silverstone Berserker showing the use of the ATX version of the chassis at that time: http://www.techimo.com/reviews/showp...7&cat=3&page=1
. It was the only Silverstone case available for under $100 at the time - and such was my budget at the time (way under $100...).

And the Temjin 5 uses a similar steel chassis as well (not sure if the TJ05 is still a current model). I'm thinking the KL03 was to replace the TJ05 in the line while lowering the price a bit.

Silverstone doesn't make their steel chassis - all those are farmed out to OEMs. But they do specify custom changes to the base design. Silverstone then adds their custom aluminum bezels. I can't recall any SSTs to have plastic bezels other than the Berserker and Berserker Jr (a neato mATX case). Several other companies sold boxes made on the same chassis like Opus, and i-Star still sells an entry-level server box based on the same (they bundle it with some of their fancy PSUs). The case version used by i-Star can also be found separately, but I've never seen a brand name associated with it. The Enermax Shiny Titanium box was on the same chassis as well. I'm not sure whether SST sold the Berserkers anywhere else in the world except the US.
. It is pretty old-school, but I like it. I was quite fond of my Berserker and have "lusted in my mind" for some time after a TJ05 (which came out about the same time as the Berserker), but couldn't justify the cost.

The other case you mentioned can be gotten in the US with the three 5" bays in the bottom just like the Berserker (and KL03) and can take the EATX length mobos, while the Berserker was ATX or smaller.

One thing I don't like on the KL03 is that there are no rubber pads on the legs to keep the box from sliding around on hard surfaces and to intercept some vibrations. Not to mention helping to avoid marring surfaces.

.bh.
Comment from jmke @ 2008/05/10
Hey Bill, appreciate your feedback. The KL03 is not bad by design, but outdated and priced too high in comparison what the competition has to offer. The P182B from Antec for example costs less, has more room and a lot more features.
Comment from zepper @ 2008/05/10
A few more things I just remembered about the KL03. There is a place for a fifth hard drive just below the external 3.5" bays (perfect for turning the '03 into a CD/DVD duplicator box - remove the HDD cage for up to seven burners plus one HDD).
. You may have wondered what those black rails in the plastic rail baggie were for (IDK why they sent 4 rails as there is only room for one extra HDD - maybe if you don't use both external bays you can use one for yet another HDD) - well, there you go. The rails go on the drive "backwards" so the front of the drive goes into the bay first and the ports are at the back. It goes in from the rear of the drive rack. I don't see this little hidey hole mentioned in the manual either - that's probably why you missed it. That is where the HDD bays were on the Berserker, but the HDDs went in from the front behind a perforated door.
. Plus the front door comes from the factory hinged to the right. Mine was damaged in shipping (front door got sprung outward a bit, and it was the right hinge hole in the plastic toe piece that took the brunt. I like my doors hinged to the left anyway, and I know I had to change this one as well as the KL01B - as you wrote, changing the door hinging is simple, just be careful not to lose the spring for the top hinge pin... I just received the repair parts for it, so now mine is good as new, and I discovered a few things in the process of disassembling the bezel from the case and rebuilding it.
. I like the open area at the bottom of the door for extra intake air. The KL01 was strangled for air as the toe area was largely blocked off (can be fixed by cutting some of the plastic toe piece away) , and the pores in the "mesh" are a lot larger in the KL03 than they were in the KL01 plus there is a lot more area of "mesh", so the KL03 ought to breathe a lot easier than the '01 (once you pull the mesh off from the front of HDD cage fan holder - the primary restriction on the front fan, IMO).