With the Geforce 9600 GT pricing reaching new lows, it becomes interesting to see if pairing up two of them can get you more bang for the buck compared to the more expensive Geforce 9800 GTX. In this review we use two Leadtek 9600 GT Extreme cards and run our battery of game tests to find out what performance you can expect.

Now that the 9600GT video cards have been out for a while prices are starting to drop and we are slightly going to the point where two 9600GT's come close to the 9800GTX price wise. The 9600GT is known for having quite some power on board, we wondered if at this moment two 9600GT's stacked in SLI is an attractive solution when it comes down to rendering 3D graphics. Leadtek supported our point of view by providing us two of their PX9600GT Extreme samples. Being factory overclocked you even get few percent extra performance, but enough to take on the 9800GTX?

Almost from the outset in October 1986, Leadtek Research Inc. embarked on a vision filled quest with pioneering designs for computer graphics products and motherboards. The fledgling company quickly claimed its 'realm' in a fiercely competitive market and began delivering copyrighted EGA BIOS and AT motherboards to an abidingly loyal clientele. So that by 1990, Leadtek's progress with quality graphics cards had resulted in global recognition for its popular brand name 'WinFast'. With the PX9600GT Extreme we're looking at the latest addition of more then 15 years experience; let's hope this card can make Leadtek shine once again. 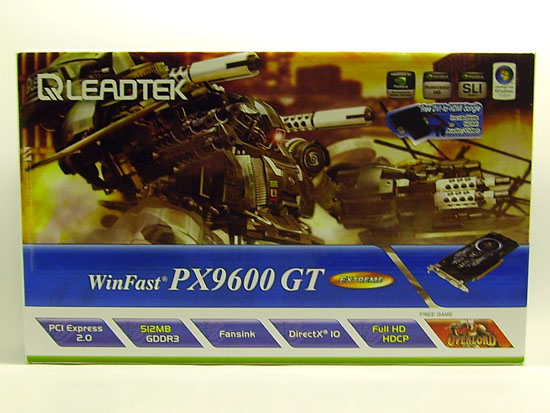 
The WinFast PX9600GT Extreme is a Leadtek product based on NVIDIA's reference design of the 9600GT. The card comes with the NVIDIA reference PCB but Leadtek factory overclocked their cards up to 720/1750/900. This means around 11% more GPU core power and nearly 8% extra shader power. The 9600GT comes with 64 stream processors; using two GT's in SLI for extra performance makes the combo in fact as powerful as a standard 9800GTX, in theory at least:

Both solutions have their pros and contras, let's quickly pop open the package and have a view inside the box ->