In this review we take a closer look at the latest product from Gainward, based on the recently released 9800 GTX we compare the BLISS´ performance in several games, and find out how cool and quiet this new high end video card is. Read on to learn more.

The NVIDIA high-end video card product range has once again been updated. Dubbed 9800GTX, we were wondering what this new product has to offer us compared to the other video cards currently available on the market. Gainward offered us their BLISS 9800GTX PCX, based on the reference specifications this is how NVIDIA originally introduced their card. Read on to find out how these new video card might be your next upgrade to high-end

Gainward is a world leading producer of High-quality, High-End 3D accelerators for the Personal Computer market. Gainward offers a full product line of value adding products targeting gaming enthusiasts as well as entry-level consumers. Since 2000 Gainward has become an official NVIDIA launch partner and have well made their name in since their establishment back on the 80's. Let's hope they can charm us yet again, for now have a look at their Bliss 9800 GTX. 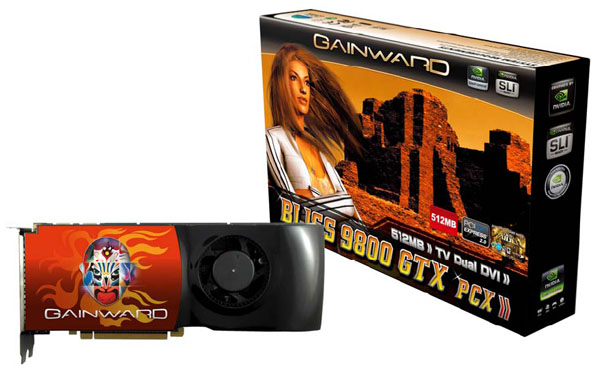 
The NVIDIA 9800GTX is the newest addition for high-end gaming market. Named the GTX, this card is in real life far from an update compared to the 'previous' generation GeForce 8 high-end counterpart. The new GTX is based on the successful G92 GPU which was first introduced back in September 2007, with the launch of the 8800GT. The same core came back later in 2007 when the 8800GTS 512MB was introduced and now it is again used as footprint for a new generation of video cards coming from the green camp. The 9800GTX features 128 stream processors and uses GDDR3 memory chips to save the GPU computational data on, 512MB data storage space has been made available.

On paper the new GTX looks pretty much like the 8800GTS 512MB but with slightly higher clocks: