In this review we compare AMD´s latest AM2+ based Phenom X4 9850 to Intel´s mainstream Q9300 Processor. Which one gives you more performance for the buck? Answering this question is not as straightforward as you might think. With AMD aggressive pricing and new B3 revision does it stand a chance against an upgraded Q6600? Let us find out.

19th November of 2007, AMD released its first desktop version based on the Agena core, the Phenom X4 9600. Introducing the first native quad core processor, AMD had claimed to have the fastest processor at that moment, but since the release, things became more clear: the Phenom was not spectacularly faster and in most cases trailing the Intel C2Q series. The biggest issues with the B2 revision were the TLB-issue and the average overclockability. The X4 9600 was clocked at a mere 2.3GHz, which was too low to fully show its potential. Next to the low stock speed, the Phenom motherboards suffered from low HTT overclocks, which made it close to impossible to run any higher than 220-230HTT. Many issues when overclocking can be solved by studying the Phenom technology and flaws in the motherboard designs, as overclocking the Phenom is not as easy as overclocking a C2D or C2Q is. More about overclocking later on.

Back to the TLB (Translation Lookaside Buffer) issue which gave AMD a headache. Not so much because of the bug itself, as no processor is 100% perfect when released, but because of the impact of the bug. Because of the TLB-erratum (erratum #298) the system could reboot/freeze at any moment due to instability. Pretty soon AMD came with a solution, but this solution was far from perfect: the performance dropped significantly when the fix was applied. The B3 revision has a hardware coded fix for the TLB-erratum so no performance drops anymore! 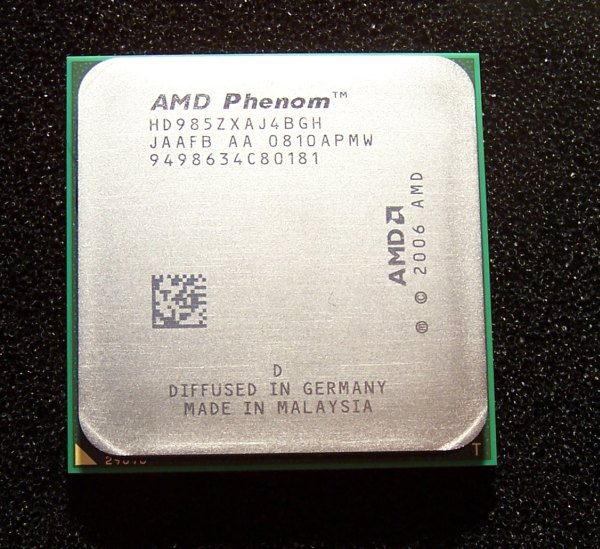 Only a month old, this processor is the fastest of the new B3 revision of the Phenom series. The xx50 processors all are B3 revisions, so make sure when you're going to pick up a Phenom you get your hands on the correct revision!

The Intel Yorkfield is a Quad Core CPU build on the smaller 45nm microprocess, we tested the high end QX9650 here at launch. The Yorkfield featured in our review today is a more friendly priced Q9300 model, which is clocked at 2.5Ghz and has a price point similar to the AMD Phenom X4 9850.
Comment from Gamer @ 2008/05/01
Great article there Massman !!!
Comment from Massman @ 2008/05/01
Thank you Gamer :-)
Comment from goingpostale1 @ 2008/05/13
Great article, surprised me to see the Phenom so close to the Core Quad. Thanks for another great review.

Comment from jmke @ 2008/05/13
if you're not into overclocking the AMD Phenom offers a very interesting price/performance ratio, only in the power usage department will it lag behind due to the larger manufacturing process