With the introduction of Vista, 2 GB of memory suddenly seems insufficient. Many people have made the jump to 4 GB lately, but on a 32Bit operating system, more is definitely overkill. Today we happen to have a 64 bit operating system installed on our test system, so there´s no stopping us from fully loading our P35 motherboard with... 8 GB of memory. And we even managed to overclock it!

After examining the package it's time to have a look at the real deal: the modules themselves of course. The platinum series still use OCZ's classic look, with the "Z" logo shining in the middle of the modules, and the honeycomb grill in a very shiny, chrome-like finish. That's right, these modules are still equipped with OCZ's trademarked honeycomb heat spreader, which is not a bad thing since it still looks and feels great, and above all because it's more than adequate to cool these voltage-limited modules. The heatspreaders are made out of nickel plated copper to give them their shiny look. 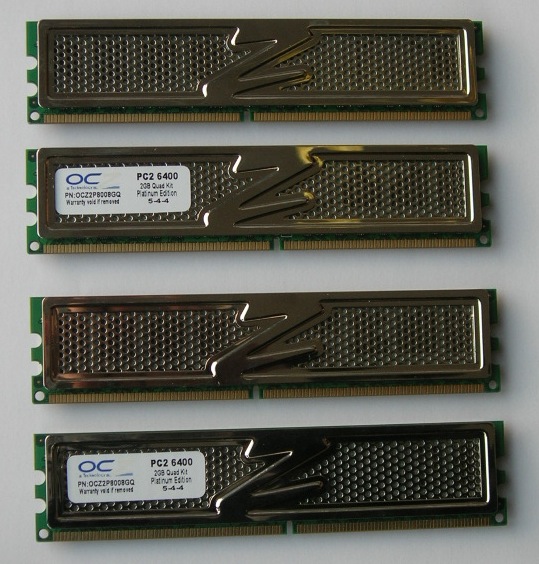 This is what the XTC heatspreader stands for:

XTC (Xtreme Thermal Convection) heat spreaders optimize the thermal management of memory modules by promoting greater airflow by means of micro-convection throughout what is usually the dead air space inside conventional heat spreader designs. In this manner, build-up of heat is avoided and thermal dissipation of the memory components is offloaded more efficiently through the honeycomb design. At the same time, mechanical stability is maintained.

To me personally, the sober look is a welcome change from OCZ's more recent heatspreader designs, which offer better cooling without a doubt, but which serve no real reason when talking "normal" voltages and use. Only the high voltage "micron" modules really benefit from better cooling and airflow, but even then you'll probably have to void warranty to make real use of an improved heatspreader (which doesn't mean it can't come in handy when you want to do stuff like that ;-) ) To make a long story short, I'm happy with OCZ's choice for these modules; they make them fit into any case, while maintaining a very good basic cooling experience through convective airflow throughout the heatspreader.

For this review we put together a high end setup based around the more mainstream P35 Intel chipset. Currently you can find some very attractively priced motherboards based on this chipset, starting from below $100. Overclocking wise you should get very nice performance out of the P35 motherboards, and the rams we're testing today should be a great complement to boards like the Asus P5K, the more basic brother of the Blitz board of the test setup.

Onto the testing now >
Comment from hephaestusp @ 2008/05/02
Well, I was wandering that since on AMD processors the memory controller is included in them, what would the results be? If there is a main difference from an Intel CPU, there it should be! If you are able to run the tests on a Phenom???
Comment from thorgal @ 2008/05/02
Quote:
I don't have a phenom system at my disposal, so for the near future I won't be able to check myself. Take a look at the OCZ support forums, you might find an answer there.