It did not take Coolermaster long to update their high end chassis, the Cosmos S is based on the Cosmos, but made from aluminum, more cooling options, comes with a massive 200mm fan and has a very unique I/O panel. We compare this S(port) version to the original to see how it stacks up.

It did not take Coolermaster long to develop a successor of their high end chassis, the Cosmos, launched late last year it featured a “spacey” design with innovative HDD bays, many tool less features and provisions for cable management, combined with enough room to house up to 5x120mm fans it provided sufficient cooling for all dual video card, quad core systems out there. What could they improve with this new revision?

To be honest, the Coolermaster Cosmos S is not a improvement “per se”, however it’s an enthusiast version of the original model, providing even more cooling (and gaining one of the first Triple-SLI ready tags from NVIDIA) and it has changed looks from silver to black.

The large box features photos of the product inside and a huge logo with the S in the spotlight. 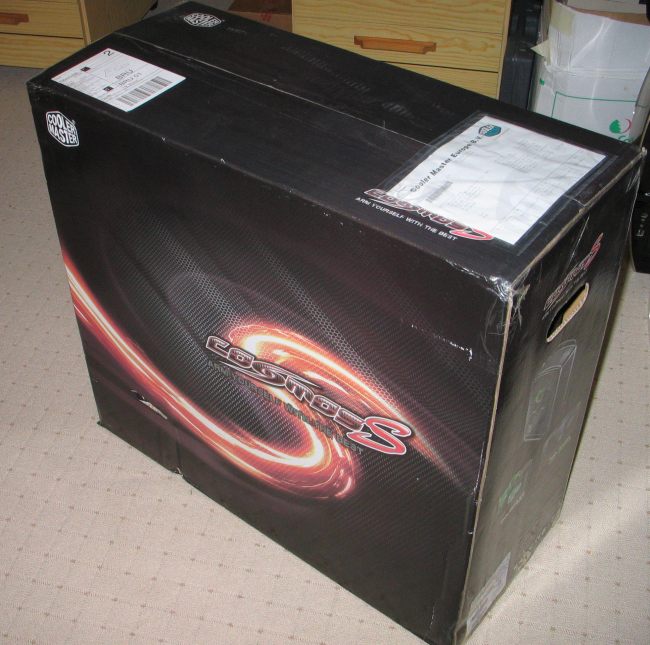 Normally when we open a chassis' box we find some hard foam and plastic bag around the case to prevent damage during transport, it’s not worth photographing as those provisions are quite standard, only when we notice packaging issues do we point them out.

Coolermaster has gone one step beyond any other case manufacturer out there and wrapped their case in a strong cloth dust free bag, overkill for sure, but it does scream “high end” product right from the get go. 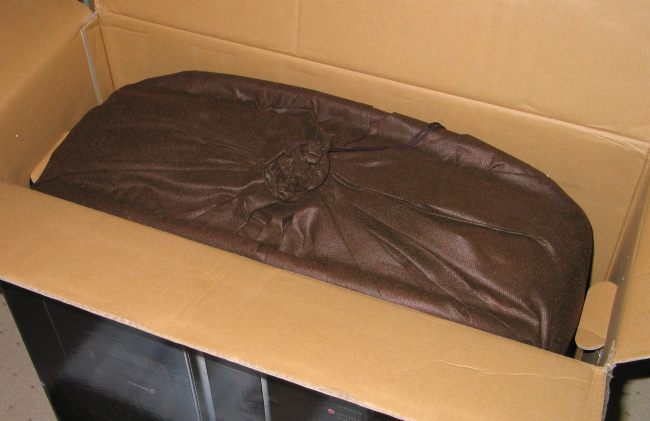 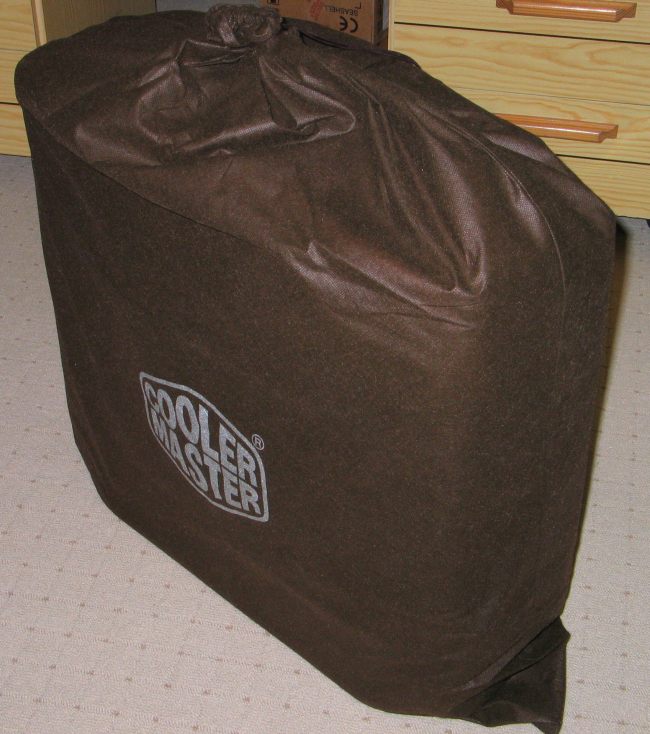 And there’s a plastic bag around the case, inside the cloth bag too… Coolermaster wants the Cosmos S to reach its new owner in mint condition. 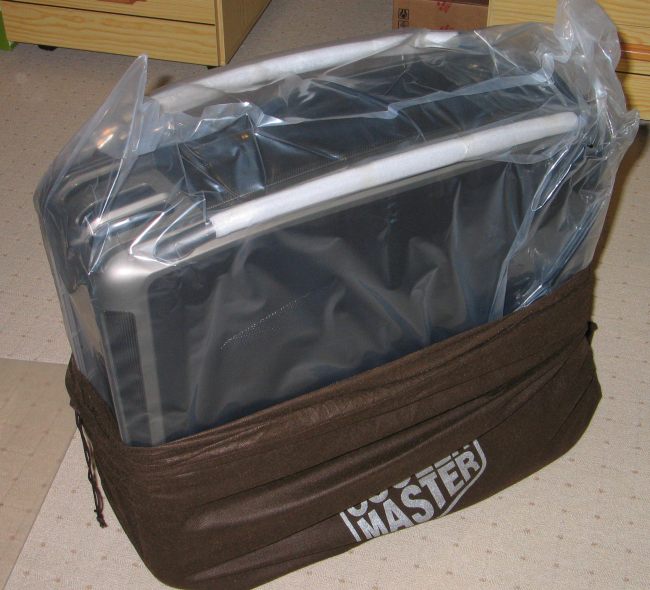 The specifications are similar to those of the original Cosmos, unsurprisingly, but there are enough differences inside and out to clearly distinguish the two, and we’re not talking about the color. 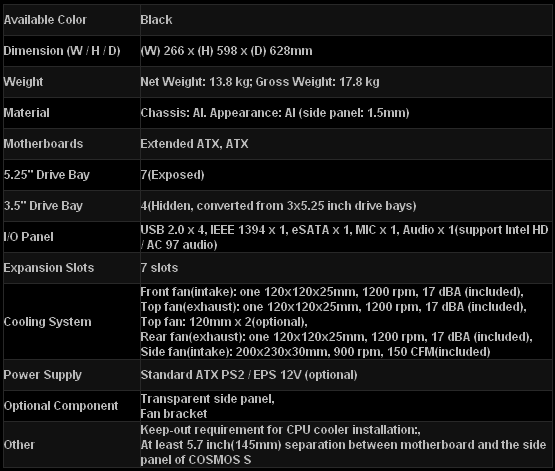 What has changed? Let’s recall the Cosmos specs: 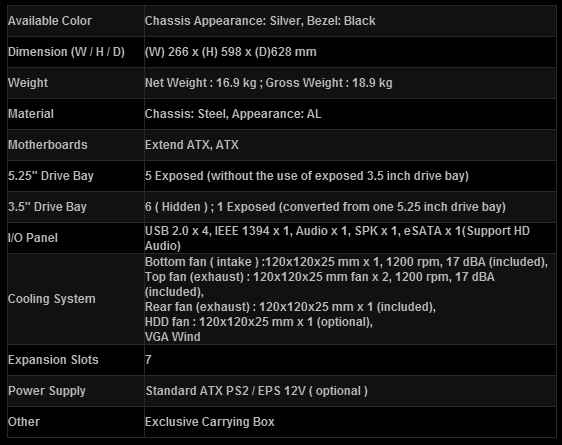 So what we got here is actually a total overhaul of the interior design, coupled with a large fan in the side panel. The chassis is now in aluminum making the whole noticeably lighter and easier to carry. The amount of exposed 5.25” bays increases, but the standard amount of HDD bays decreases from 6 to 4. Cooling wise we already mentioned the side panel fan, but there also room for one more 120mm fan at the top. You get a total of four fans included with the Cosmos S versus only 3 in the previous version.

Let’s compare size and take a closer look ->
Comment from Kougar @ 2008/03/05
Great review, thank you for the detailed photos.

Best review I've read of the case... Any idea if they offer extra drive cages separately? They should of at least included a 2nd one for the price...

As much as I am liking this case for how well it fits my needs, the price is a bit to high to swallow. Might at well look at the MountainMod designs, as they start at the same price.

Comment from jmke @ 2008/03/07
Yes the HDD bay module is available separately from Coolermaster (since Stacker series already), but not all retailers carry this product afaik.

Saw some Cosmos cases at cases with custom paint job, for a nice $900

Comment from nexeternus @ 2008/03/23
I've posted this question in other forums, nobody seems to know the answer to it, or does not want to answer. This is my 1st post here, and let me just say madshrimps has the most excellent case reviews I've read, I just like the size comparison charts which gives a very good idea how large the cases being reviewed are!

so here is my question.
Does the biometric power button work like a regular power button when held down. wherein it forces hard shutdown when within windows.

I asked because it just occured to me that it has no reset button, meaning I'd have to flip the switch in my PSU, then I realized my PSU the corsair 520HX does not have a switch. I just wondered what I had to do if my windows locks up.

I'd not like to have to unplug it from the wall.

welcome to the forums!

yes, if you hold your finger on the button it's the same as with a normal power button; as long as you keep your finger on the button it will be in the "on" state and holding it for 4-5 seconds will hard shutdown your system.
Comment from nexeternus @ 2008/03/23
At last!! Mwahahahaha!! Thanks jkme for your response, and glad to be here.
Comment from Morentho @ 2008/05/05
Thank you for the best Cosmos S review on the web!

Can you please tell us what fan controller you used on page 5 of the review?

I am a neat freak and as this is a red-light themed case I would like a nice red led fan controller.

Comment from jmke @ 2008/05/05
this one: http://www.mountainmods.com/sunbeam-...2k8h6oqvnt9t85
Sunbeamtech 5.25" Fan Controller, it's RED because it's feeding the fans less than 7v, at 7v+ the LEDs turn bright BLUE. so do take that into account.
Also the leds are very bright when lit up blue and might be blinding

You can dim them a bit using a method like mentioned here: http://www.madshrimps.be/?action=get...=70&howtoID=29