Noctua improved the design of the original NH-U12 to make it fit more motherboards, at the same time they decided to bundle it with a low noise 120mm fan. Can this refreshed product stand a chance against heavy competition? We find out

Straight out of Austria we saw the first Noctua PC cooling products arrive in enthusiast shops at end of the 2005. We tested their NH-U12 and NH-U9 CPU coolers and found them to offer an excellent performance/noise balance, especially the larger model with 120mm fans support was able to match the then current crop of high end CPU coolers.

We’re now 2 years later and Noctua has been busy expanding their product line-up with chipset coolers, thermal compound and special 120mm fans. But their CPU coolers remained pretty much unchanged, until now. With the introduction of the NH-U12P Noctua not only includes their own low noise 120mm fan, but also tweaked the heatsink design to fit a wider range of motherboards (no know compatibility issues in fact) and better performance.

Let’s find out if they improved upon their original design, we dusted off the box of the NH-U12 and put it head to head to the new arrival.

Noctua updated their color scheme, adding a bit of blue to their packaging, they’ve also listed all the specifications one could want clearly on the box: 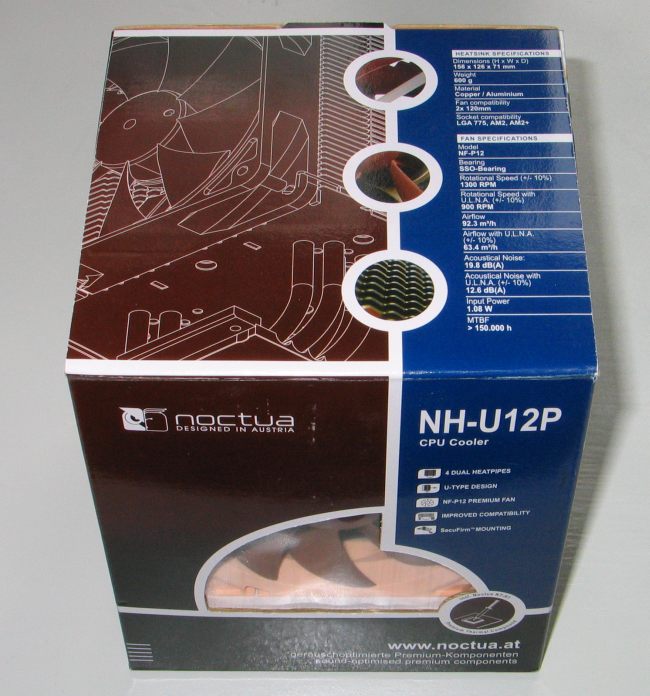 Here they are again, even more in-depth, from this page.

As you might notice looking at the specs sheet, the included fan is half of the update of the original NH-U12.

Let’s take a look inside the box ->