Arctic Cooling is known for their highly efficient and affordable CPU and VGA heatsinks, when they offered us their latest high end Geforce 8800 / ATI HD 2900 cooler for test we jumped at the opportunity. The Accelero Xtreme is the biggest VGA cooler we have tested yet and promises to gives the best from Thermalright and Zalman a runs for its money. Can this product grab top spot in our VGA cooler performance chart? Let´s find out.

Arctic Cooling has been around for quite some time now and gaining more recognition world wide. The reason why AC is having success with their products is because they are geared towards silence and performance, while keeping the price very competitive. The Accelero series is a range of AC heatsinks aimed for the VGA market, their latest product recently landed on my doorstep and although that it is still a pre-release sample, AC is just few weeks away from making this product available for everyone. Here is a quick shot of what you'll be looking for once it hit the streets: 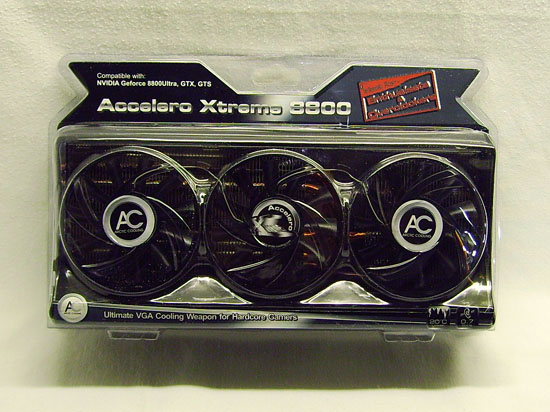 Madshrimps has tested already few Geforce 8800GTS (G80) compatible video cards coolers, visiting google-pictures made us very curious to find out how Xtreme 8800 would stack up against the best we have available at this moment. In a series of repeated benchmark we tried to get representable results, here is a list of the products we will be comparing:

Our test setup consists out of the following components: