Intel is launching their successor the popular Conroe CPU, build on 45nm manufacturing process, it boasts reduced power consumption and has 50% more L2 cache. The first product out the door is a quad core beast dubbed QX9650. We take this new creation through its paces, comparing performance, power consumption and venturing into overclocking land, where sub zero cooling is the norm.

When the Core 2 Duo was launched Intel tweaked their existing 975 chipset to support the new processor, it was but a quick patch and while 975 based boards did okay with the new CPU at default settings, it wasn’t long before enthusiasts wanted more than stock speeds, here they hit a motherboard limit quickly as the 975 based boards were incapable of reaching high FSB speeds, needed for overclocking. The answer to this problem came in the form of the more affordable P965 chipset, this one was build from the ground up with Core 2 support in mind, and it delivered impressive results. Then came along the first Core 2 Quad processor and enthusiasts were again met with lower than expected FSB overclocks on different motherboards, earlier this year Intel released the P35, an updated mid-range chipset with above average Quad Core support, even overclocking was possible to an extent. 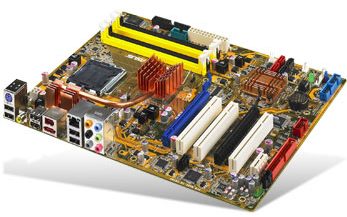 QX9650 on the Asus P5K before we updated the BIOS

Back to the QX9650 Quad Core sample we have in the lab today, we first tested the CPU on an Asus P5K motherboard, based on the P35 chipset the BIOS recognized the processor correctly and after a fresh install of Windows XP we were set to start our battery of tests. It didn’t take long for us to find something odd happening; with the CPU running at default speed results were fluctuating between runs, up to 40% in some cases. Only when we disabled Multi Core and ran with a single core the QX9650 acted normally on the P5K board, this was less than ideal of course. Since we already had the latest BIOS the Asus board there was not much else to do than try another board. 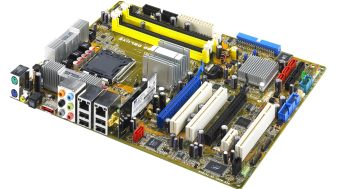 Another Asus board to the rescue, the older P5B Deluxe, based on the P965 chipset this board is know for good Quad Core support, but the latest BIOS did not allow for multiplier changes, so we continued our search for a motherboard which could profit from all the power this QX9650 sample has to offer. 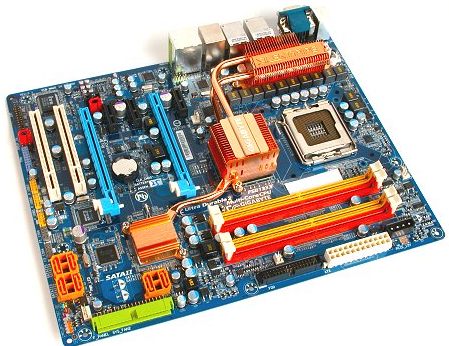 Our local Computer Shop Forcom.be helped us out by lending a Gigabyte X38 DQ6, this motherboard is brand new, based on the recently released X38 chipset, the Gigabyte board features a 8 phase digital power regulater (PWM) and our overclocking results with the new Quad Core Yorkfield delivered repeatable benchmarks and reached new heights.


Comment from Sidney @ 2007/10/29
Reading other reviews, it would seem the engineering sample tested at [M] requires more vcore than others. 4Ghz quad would now be common speed; no bragging right unless you see 5Ghz.

Comment from jmke @ 2007/10/29
yes that seems to be the case, but no faulting engineering samples, they are supposed to run without fault at rated speeds with default vcore, which this QX9650 did

Regarding the discrepancy with your power chart, I think that has something to do with the physical properties of the chip design. I suspect that at very high frequencies there is a thermal threshold that once neared the leakage increases dramatically. After which it will quickly reach the point where the chip ceases to function or function stably since the increased leakage raises the heat, and the heat only further increases the transistor leakage in a self-fulfilling cycle. I don't have any real proof other than my own experiences with my Q6600...

I am curious, I notice from that CPUZ image the ES QX9650 uses 1.20v at 3GHz. My own Q6600 does the same... so how far can you drop the voltage and have the QX9650 remain stable at 3Ghz? I got a Q6600 down to 1.5v, but somewhere below that point my Q6600 will show errors. Gigabyte unfortunately lacks most of the FSB voltage tuning ASUS boards offer, as some members on the XS forums claim to have reached 1.10v for 2.5-2.8Ghz speeds for Kentsfields. Would be interesting to note what effect the smaller process size and change in transistor materials would have on this for Penryn.
Comment from jmke @ 2007/10/29
Quote:
You can

I guess I need to take more power measurements since the data I have on my Q6600 includes my video card...

Why not extend that same chart a bit more to the right though, and undervolt that puppy?

Comment from CFKane @ 2007/10/30
I'm a little surprised that you're talking about a discrepancy in the chart while you're mentioning the changed cooling solution in the same sentence. The die temperature is one of the most important factors for the CPU power consumption and if you switch to a solution which removes the heat more efficiently, you should expect reduced power draw even with a higher clock and voltage.

That's also the reason why the maximum current in the electrical specifications for CPUs significantly exceeds what you would get from dividing the TDP by the core voltage. It's given for the maximum die temperature, which you will (hopefully) never reach in a real world situation.

Bear that in mind when testing or comparing CPU power consumption: The room/case temperature and cooling solution have a major influence and the die temperature at a certain load is an interesting figure to report along the power draw (sadly missing in most reviews).
Comment from jmke @ 2007/10/30
Thank you CFKane for you post and welcome to the forums

since the temperature was the only large difference between the two settings we were not doubting that it was indeed the lower temperature which was causing the lower temps; but I've not seen any article on the web discussing this aspect of the power consumption... hence were a bit hesitant to include that statement.
Comment from jmke @ 2007/12/07
we also got word back from Intel explaining the power usage at different temperatures: