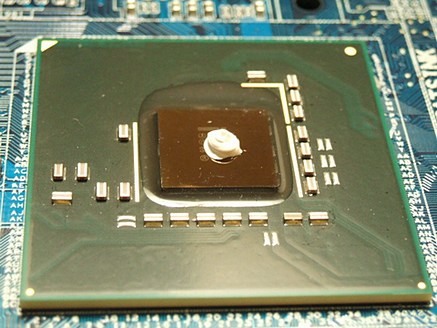 As mentioned on the previous page, electrical conductivity is high on the list of criteria where TIM's are concerned. The macro photo above provides a clear example why TIM’s are not made with an extraordinarily high metal content. While higher metal content might out-perform most silicon or synthetics, metal conducts electricity. Looking at the amount of paste and the proximity of the capacitors on the North Bridge surface pictured above, if the paste should reach those SMD's a short would certainly occur damaging any number of components. While metal infused TIM’s held the performance reigns for sometime there was always that "danger" and confusion they conducted more then heat. Currently there are three general categories for TIM formulas including Silicon, Synthetics (ceramic based) and Metal pastes (small amount of trace metals). The search for the ideal TIM has produced some exotic products. One such product released in 2003 was Nanotherm PCM+. Developed by ESG Associates their formula was not only controversial, it was purportedly the first ever active Thermal Transfer Material. 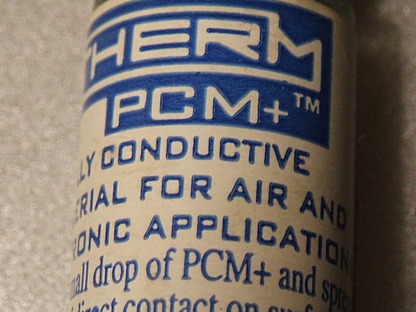 When Nanotherm PCM+ (Phase Change Material) first arrived it truly impressed besting products from Arctic Silver as shown in our review here. The basis for PCM+ success (at least initially) was not so much the ingredients themselves, but how they supposedly worked. PCM+ was said to undergo a rapid phase change as the main proponent of it’s heat transfer mechanism. Thermal energy generated by the processor passed to the paste and the product changed from a liquid to a gaseous state and back again.

Unfortunately for Nanotherm questions were raised at several PC-Enthusiast Forums which then led to this article Mod Synergy entitled; Nanotherm PCM+ "The after effects raises questions". Nanotherm responded by making changes to their formula and after several revisions I have what may be a sample from that very last batch. PCM+ will be tested here today because of its unique place in TIM history.

Comment from Rutar @ 2007/12/13
that TX-2 seems to be good stuff, but I think you made an error in the ranking of AS5 and MX2 because AS5 definatly looses for long term stability and electrical safety