In the PC industry HEAT is not just the by-product of ever increasing transistor counts and shrinking micro-processes, it’s also our arch nemesis. As the micro-processor industry seems to bear out Moore’s Law a multi-million dollar industry based on what are effectively ad hoc cooling solutions has evolved. One area where the term micro in micro-processing industry haunts us are those micro-pores and striations which exist in all heatsink base and IHS (Integrated Heat Spreader) surfaces. The illustrations below borrowed from the AMD white-paper Thermal Interface Material Comparison (pdf) and Koolance give an example of where these imperfections live.

The human eye cannot detect imperfections this minute and if left "untreated" you’re either going to experience very high processor temps affecting performance or CPU failure all together. Shortly after micro-processors began to produce more heat than their surfaces could dissipate the first heatsinks were born. At that point the need for a thermal interface material, to literally fill the gap in the new technology, was needed. As this new industry grew, choices and formulas for thermal interface materials were first on the R&D list. Silicon was the minimum standard and then metal based formulas hit the market. Silver in particular not only sounded great to the consumer, its high thermal conductivity made it an ideal ingredient (in small quantities). Of course it's not just conductivity, a TIM (Thermal Interface Material) must also fill surface gaps and hopefully displace the air that would remain without it. Air compared to Silver has a low conductivity as expressed in this formula W/m K = 0.026, while silver = 429.0. Between air and paste containing 10% silver, the latter seems a much better option.

The TIM industry has been working to develop the ultimate formula by attempting to incorporate those materials with the highest thermal conductivity and an ability to fill gaps. Of course those may be very important, but there are other attributes. AMD's white paper Thermal Interface Material Comparison lists five "Guidelines" or criteria for thermal interface materials. Listed verbatim they are:

Electrical conductivity is of course high on the list and as we will discover this conundrum for manufacturers has prompted experimentation with many different materials. Albeit silver, silicon, or diamond most manufacturers have to consider all the guidelines if they want to produce a desirable product. Perhaps other criteria might be cost, although I really haven't heard too many PC-Enthusiasts complain once they've discovered how critical a robust thermal interface material is to the life of their processor. 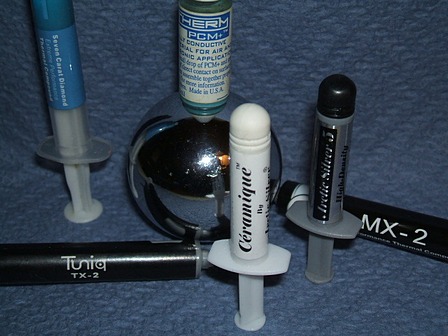 Onto thermal paste formulas ->
Comment from Rutar @ 2007/12/13
that TX-2 seems to be good stuff, but I think you made an error in the ranking of AS5 and MX2 because AS5 definatly looses for long term stability and electrical safety