In this large group test we compare over 30 CPU heatsinks with different fan speeds, giving you the data on both thermal and decibel performance. Want to upgrade your stock cooler? This roundup will help you out.

Our previous S775 group tests had only 1 reference cooler from Intel, the low end aluminum model with a rather noisy fan (at highest speed setting), with a bit of encouragement from our readers we decided to include more models this time around.

The 3 Intel coolers in for test are very similar looking, you’ll have to look closely to notice a difference:

The one of the left is the heaviest, with copper insert and extra height, also a fan with more fanblades. The middle and right one are quite similar from this angle, but a closer look shows you the difference: 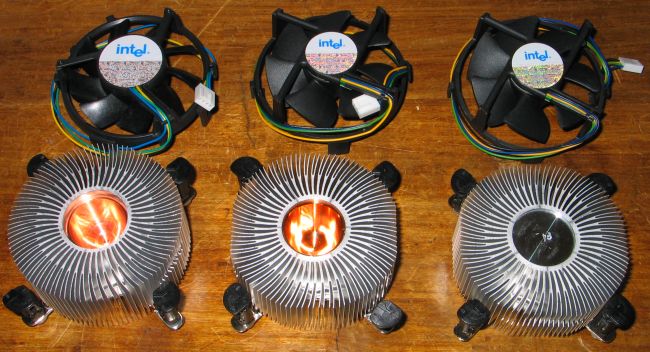 You should notice a height difference between the middle and left one, the aluminium fins are higher on the left one, but the copper insert remains the same size. The fan on the largest HSF is lower profile and features more blades and lower incline, this should translate into more airflow at lower noise, depending on the RPM, compared the two other more similar fan designs.

Installed they all pretty much look the same, after pushing the 4 mounting pins down they click into place and all that’s left to do is to connect the 4-pin connector the PWM fan. 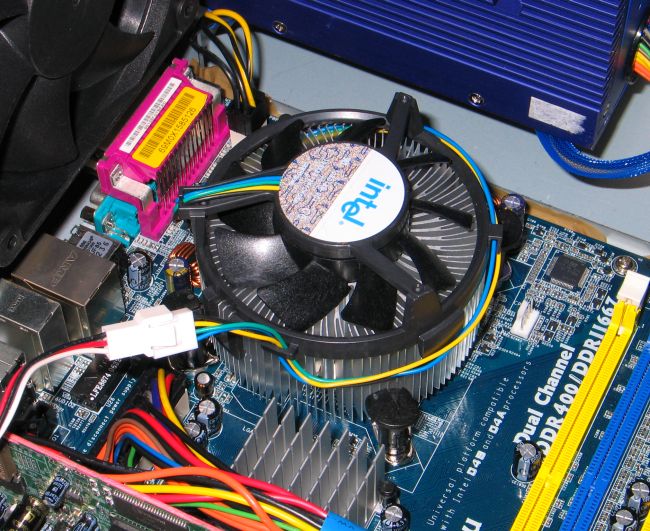 The advantage of the PWM (pulse width modulation) fan speed over normal voltage based is more accurately control, you can very gradually increase/decrease the fan speed without having any large bumps along the way; this translates into a more enjoyable experience when the system is under load and requires more cooling, as the fan will speed up incrementally in very small steps.

Most recent motherboards have a 4-pin CPU fan header, and through the BIOS you can set an ideal CPU temperature, MAX CPU temperature and let the BIOS handle the rest, speeding up and slowing down the fan when needed to keep the CPU temperature within the chosen range. The Intel reference coolers go a step further still, the fan has a small temp probe and reads the heatsink’s temperature directly to influence the fan speed; so even if you don’t go into BIOS and enable SmartFan control, the Intel reference Fan will speed up under load and slow down when the CPU is running idle.

This dynamic fan control is an excellent feature for the end user, but less practical for a reviewer to get repeatable results; since room temperature differs a lot between periods of the year (not talking about different climates yet) the noise/temperature results in July will not be the same as those in December, even if we accurately track the room temperature.

With the Intel reference coolers we noticed that they have a sweet spot for the CPU, meaning that at a certain temperature, the heatsink will try to keep the CPU temp stable, and when the load increases, the fan speed gradually goes up, so your system running in the summer with a room temp of 25°C will have a CPU maximum temperature of ~60°C, and in the winter in your colder 18°C room, the CPU temperature will still be ~60°C, the difference will be in the amount of noise your computer is making.

In our previous S775 roundup we included the dBA readings from the Aluminum Intel HSF under worse case scenario; what noise does it make at full speed. But that speed is not obtained easily, most of the time the fan will spin slower; in our tests today we include CPU temperature and noise results with the fan at “auto” setting (if you call it that) in a 22°C room. We also include “worse” case scenario numbers for each reference cooler; just in case you do intend to try and overclock your system, or you live in/move to a warmer area.

Enough with this rant on the Intel reference coolers, time to tackle the aftermarket products, Arctic Cooling is up first ->
Comment from Rutar @ 2007/11/06
impressive


A new sheriff in town from Coolink (former Noiseblocker), it is VERY interesting that it seems to be geared towards silent computing (hence performing best there while not outperforming with a high speed fan. I can't seem to get it here tough

Edit : found it :$ But it's watercooling :s : why did you include it in the charts ? Shouldn't there be an explanation added ?
Comment from jmke @ 2007/11/06
it's water cooling and it's not water cooling at the same time imho; this all in one kit doesn't install different from many other heatsinks, there is zero maintenance, zero risk. It gives you an idea of TEC performance combined with water cooling. Plus, if you state that I should not include it, why include the GTO-990 ? It has a radiator, pump and water block, mounted on a small surface; should I not include that one either?

While the CoolIT does use water to cool down the CPU, it's such a compact and one in all device that I never stopped to think of it as a water cooling setup, similar to the Swiftech and Dangerden offerings. It can be installed by any PC illiterate without risk of damage, most water cooling kits sold do require a bit more knowledge and include some risk.
Comment from thorgal @ 2007/11/07
My feeling is you're walking a thin line here. I do not disagree with your previous post, but to my feeling : air is air, and water is water

Hassle is not a criterea I think, or you could just as well include a resorator from Zalman for example : all in one solution with only one waterblock to install to the cpu, almost the same as the CoolIT in my book. Zalman uses a clamp system not unlike CoolIT to attach the tubing to the cpu block, external connections with Zalman are clampless. Just to say there's no hassle there as well (I'm not a real resorator fan myself

And then there's the price : air coolers of around $40 compared to a watercooling system from over a $100... in that respect the CoolIT is definately in the watercooling league.

Anyway : the chart is not necessarily wrong, and provides an interesting comparison between the two technologies, but isn't this comparing apples to oranges ?

All imho of course