In this large group test we compare over 30 CPU heatsinks with different fan speeds, giving you the data on both thermal and decibel performance. Want to upgrade your stock cooler? This roundup will help you out.

Welcome to our fall roundup of the latest CPU cooling solutions, it has been a while since our last group test back in June. We haven’t been idle since then though, collecting samples here and there to offer you a more complete overview of the CPU heatsinks available on the market today.

We have received 13 new offerings from some well known companies as well as products from new startups; with most enthusiasts now working on Intel Core 2 systems we decided to focus on S775 compatible units, some are multi-platform, but not all. Furthermore we included three different Intel reference heatsinks which are provided with different Intel CPUs.

So let’s get this show on the road: 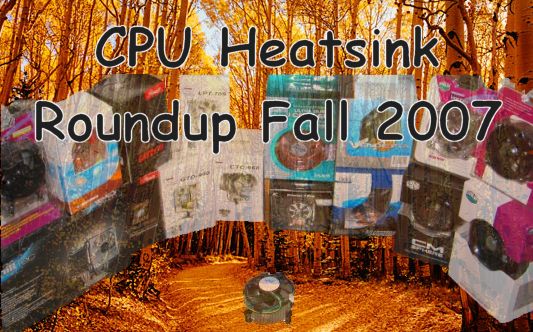 These are the heatsinks we tested back in June and we’ll include for comparison today:


A new sheriff in town from Coolink (former Noiseblocker), it is VERY interesting that it seems to be geared towards silent computing (hence performing best there while not outperforming with a high speed fan. I can't seem to get it here tough

Edit : found it :$ But it's watercooling :s : why did you include it in the charts ? Shouldn't there be an explanation added ?
Comment from jmke @ 2007/11/06
it's water cooling and it's not water cooling at the same time imho; this all in one kit doesn't install different from many other heatsinks, there is zero maintenance, zero risk. It gives you an idea of TEC performance combined with water cooling. Plus, if you state that I should not include it, why include the GTO-990 ? It has a radiator, pump and water block, mounted on a small surface; should I not include that one either?

While the CoolIT does use water to cool down the CPU, it's such a compact and one in all device that I never stopped to think of it as a water cooling setup, similar to the Swiftech and Dangerden offerings. It can be installed by any PC illiterate without risk of damage, most water cooling kits sold do require a bit more knowledge and include some risk.
Comment from thorgal @ 2007/11/07
My feeling is you're walking a thin line here. I do not disagree with your previous post, but to my feeling : air is air, and water is water

Hassle is not a criterea I think, or you could just as well include a resorator from Zalman for example : all in one solution with only one waterblock to install to the cpu, almost the same as the CoolIT in my book. Zalman uses a clamp system not unlike CoolIT to attach the tubing to the cpu block, external connections with Zalman are clampless. Just to say there's no hassle there as well (I'm not a real resorator fan myself

And then there's the price : air coolers of around $40 compared to a watercooling system from over a $100... in that respect the CoolIT is definately in the watercooling league.

Anyway : the chart is not necessarily wrong, and provides an interesting comparison between the two technologies, but isn't this comparing apples to oranges ?

All imho of course