In almost every PC Power & Cooling review we find the same accolades. To that end the marketing department decided to incorporate two universal quantifiers in their ad campaign for the 1KW-SR TurboCool: \"...Biggest, Baddest...\" In my Linquistic studies, particularly Semantic\'s few subjects evoked as many arguments as Universal Quantification. In other \"worlds\" if you say something is the \"biggest\" or Baddest\" be prepared to prove it at \"any\" given time...

A Tale of Two Rails

The History of the Multi-Rail PSU 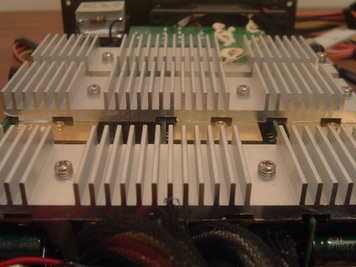 Today the PSU industry looks nothing like its former self. There are a veritable cornucopia of PSU models and almost as many manufacturers endorsing these products. The Multi-Rail (MR) Moduar PSU world is filled with every size and shape connector, however; two of the most important connectors the 12V external 6-pin and 8-pin graphic connectors have no power standardization. Insofar as modular cables themselves each connection introduces resistance and eventual oxidation where some power loss will occur. Unfortunately for the layperson the Multi-Rail era has complicated things and deciphering side panel specs off most MR PSU's is just esoteric enough to confuse and vague enough to confound. The last few years have seen unprecedented growth with competition coming from the most unlikely of places. Companies now endorsing Power Supplies include the graphic card maker BFG, a collaborative effort by Foxconn / Winfast, and I reviewed the Corsair 620 some time ago. 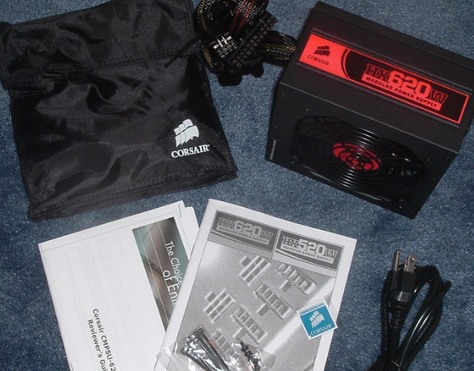 Not so long ago the PSU marketplace was a fairly benign environment, due largely to lower power consumption, uniformity in PSU and motherboard design and the fact the power supply image was anything but sexy. The PSU, is for all intensive purposes a passive unit, except when it is not, as in Active PFC. When your PSU is operating as it was designed its passivity went unnoticed and your PC performed as it should. Today PSU builders actually look for ways to make their PSU stand out, this began just prior to the onset of SLI when a company known as TTGI gave us their 550W which incorporated four LED cooling fans which glowed in your case and for the Enthusiast accessible Rail pots. Today the definition of sexy is tripping circuit breakers.

When the 1KW club came to fruition, PC Power & Cooling was not only the first to traverse that peak their innovative design exceeded most others in performance at that time making them the unoffcal king of the Hill. Initially PCP&C was widely criticized for introducing such high current designs, both the 850W and 1KW TurboCool models were lambasted for such immoderate power. Shortly thereafter, SLI graphic solutions along with power hungry processors demanded more current and several other companies released their 1KW models. As the need for power went through the roof, those of us who knew PCP&P and they're pendant for solid design felt vindicated in our belief the additional power would be needed and PCP&P made the right choices. Of course changes in the industry were somehing PCPower anticipated long before SLI.

Major changes in the power industry began when Intel published the ATX / ATX12V Power Supply Design Guide (ver. 1.0 .pdf). This document introduced the 2x2 12VDC power connector delivering current to motherboards powering the CPU off 12VDC ~ DC converters. In the long run the 2x2 12VDC connector made sense, however; there was a sense of urgency on Intel's part as their processors had a voracious appetite for power. Perhaps no other Journalist explained Santa Clara's R&D path and the ramifications on the industry more astutely then Van Smith in his Bytes & Bits articles.

The next major change and the catalyst behind the market as it exists this day was the publication of the Intel ATX12VDC Power Supply Design Guide 2.0 (pdf). This essentially introduced the MR power supply to the industry. Since its introduction millions of PSUs have been sold on what is arguably questionable engineering standards found in these documents. The only valid point to support architecture with effects reaching far beyond the PSU itself were UL safety considerations. I have been admittedly crass in past criticisms of these guidelines since PSU makers began to use the threat of "death by electrocution" as a marketing point. When you need to scare people into buying your products things are getting out of control. The only way I can see "death" occurring was if an End-user were sucking on his/her Molex to check if his/her system were powered up. At this point you’re most likely dealing with the shallow end of the gene pool and its unlikely this sort of person and a PC would occupy the same space. If you’re reading this, don't suck on any cables!

Now onto the limitations of MR, simply put MR designs are only able to distribute a maximum 18A ~ 22A (500ms peak) on any given Rail and if that particular rail only draws 5A the remainder of the current is ultimately dissipated as heat. Regardless of the amperes on a MR power supply it will ultimately be limited to 18A ~ 22A on each particular 12VDC rail. In a SR solution (a correctly designed version) the power is distributed where and when it's needed minimizing loos. To date I cannot see any benefit in owning a MR power supply and the only real benefit to the industry were the number of poorly built power supplies which prompted discussion of the subject from which the layperson could now glean some knowledge. As for the bulk f power supplies on the market today most are MR and my advice is caveat emptor.

As the truth about MR units slowly demystifies the marketing hype, the newest trend in the PSU marketing world is to build uber wattage PSUs. There are wattage limits whih will ultimately make design of the PSU the critical issue. Where wattage is concerned, the pinnacle of power currently resides with the company Ultra whom debuted a 2KW PSU at the 2007 CES, however; UL restrictions forced the company to drop it's final wattage rating to 1600W with a 20A outlet requirment. Perhaps the most thorough article on Ultra's X3 1600W behemouth can be found in this [H]ardOCP review. In absence of a 20A circuit (for which Ultra supplies the dedicated power cord) [H] tested the unit off a typical 15A outlet discovering the PSU provided a peak 1200 ~ 1300W. [H] praised the Ultra X3 design as one of the very best they've seen and the review definately deserves a read if just for the explanation of Ultra's circuit design. Given the Ultra's specifications it may be overdue for PCPower to loose the "Biggest, Baddest" slogan, however; a much more interesting comparsion would be the Single-Rail design choices between the 1KW-SR we review today which [H] also reviewed and the Ultra X3 1600W.


TurboCool 1KW-SR specifications ->
Comment from geoffrey @ 2007/10/08
Awesome build!
Comment from doug-jensen @ 2007/10/08
Quote:
This is the first competent and honest PSU review I have come across. Even the biggest and best known hardware review sites have shown themselves to be incompetent or dishonest or both. Although you mentioned the critical issue of ambient temperature (unlike any other reviewers), it would have been nice if you could have done some power measurements at realistic in-case temperatures. But your link to PCP&C's Myths page helps a lot.