We start of our worklog action with a geek who’s basically doing the exact opposite of what his nickname makes you believe : Gamer. Although he’s no longer in his twenties he hangs out with the “young crowd” everyday. His primary workstation is a Core 2 powered laptop with 7950GT powered VGA card. So he fits the bill of the hardware geek completely when he decided to buy €1000+ of new material to test a €70 VGA card! (That’s excluding the phase change cooling unit!)

His collection of hardware acquired to do nothing but run benchmarks include two Core 2 Duo CPUs (E6600/E6300), two Asus motherboards (P5B, and new P5K), some OCZ 2x1Gb VX2 memory modules, a 700W high end Zippy PSU and to finish the job off a blistering fast 40Gb 5400rpm HDD from Maxtor ;)

After installing his favourite Windows OS he got right down to business, the 7300 GT from Zotac is clocked by default at 500Mhz for the GPU and 750Mhz for the memory, using stock cooling Gamer pushed his card up to 690/850 for his first 3Dmark2001SE benchmark runs.

His setup is what most benchmarkers (if there exists such a word) use, an open test bed with lots of drivers CDs and cables bundled up in a cosy mess. 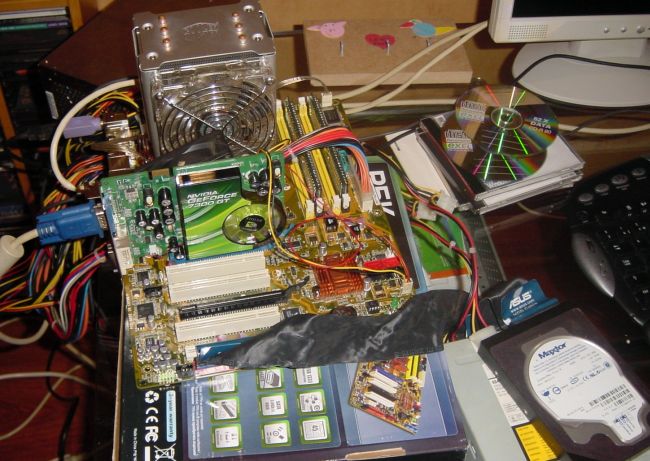 With a bit more tweaking and fiddling with driver versions his first score submitted for the 3DMark2001SE ranking was 189.9FPS in the “Nature” Game test. With default video card clock speeds you get ~135FPS on average at 1280x1024 resolution. With clock speeds increased to 680/961 as Gamer did you boost performance by ~40%! Impressive to say the least.

Wait a minute there; in the 3rd paragraph we mentioned his maximum GPU clocks at 690, why only 680Mhz is shown here. Turns out that pushing the GPU past its maximum “stable” speed doesn’t cause an immediate crash, the increase “faults” cause the 3D performance to decrease, so clocking the GPU lower actually makes the score go up!

At this point in the contest most people had their cards running on air cooling at GPU speeds between 660 and 700Mhz, thus the final scores were not very far apart, software tweaks only helped “that” much and they were hungering for more GPU power. Scanning search results of different Google queries didn’t make us any wiser on how to increase the voltage to either GPU or memory chips. In the end it was our very own Geoffrey who figured it out and graciously provided instructions to everybody (he could have kept it for himself, but where’s the fun in that) on how to do the voltage modification.

Gamer was the first to pick up a pencil and strike it a few times over the correct resistors on the card, increasing the GPU & MEM voltage a bit. The end result for his effort was an increase in stable overclock to 710/1000, his 3DMark2001SE bumped to 196.6FPS, +45% over default. It was not enough for Gamer, so he decided to do, what people in the “business” call, a hard-mod. Finding the correct VR (voltage regulators) and using his trusty multi-meter he typed the following words in the forum:

Gamer: Can somebody voltmod this card for me?

When he didn’t get a positive answer in the next 24 hours, he did what any enthusiast would do, try it himself. He decided to do the GPU volt mod first, with a 10 Kohm 3-pin VR he wanted to connect pin 1 (or 3) the correct point on the card, the middle pint went to the ground connection. Friendly forum OC friend Massman advised him to take some useful safety measurements first: