For most folks the reason for buying a new video card is simple necessity, either the old hardware broke, or is in need of an upgrade. Than there are those who upgrade every few months to the latest and greatest in order to run their games and insanely high resolutions and quality settings. It should come as no surprise that the number of people who upgrade this often is quite small compared to the occasional PC user. Than there’s a third kind of people, who upgrade and buy new hardware, not because their PCs are too slow, not because it broke, and not because they want to run the latest games and applications at high speed. These people buy hardware just to run benchmarks and posts scores in popular forums and on World Record databases. There are not a lot of these people around; they are in the top echelon of the aforementioned category. Still they do thrive and gain number each year, these people tend to get early samples of new hardware and share them with their fellow enthusiasts.

Today we bring you our very own in-house report on this strange breed of PC users who’s only goal of buying a new hardware piece, is to run benchmarks over and over again to get the highest scores. In cooperation with the enthusiast Belgian Overclocking Team we gathered up 20 samples of an affordable VGA card to organize a “VGA Overclocking Contest”.

While it would be cool and interesting to get every participant to cough up €500+ for this contest, we thought we would have more success if we kept the price of the VGA card below the €100 mark. Since this is an overclocking contest, it would be no good to get a video card which doesn’t really scale well with higher clock speed. We started our search at the beginning of the year, with promises of NVIDIA low-mid range video cards in the coming months we tried to get prices for the 8400/8500 series; unfortunately, NVIDIA failed to actually improve performance over their last generation cards AND the last 7 series were cheaper too. We checked results for different video cards at forums and websites, but in the end found the answer at HWbot.org, this hardware database keeps records of over 60.000 overclocking results with different hardware. We used their nifty auto chart generation tool and gathered up a series of <€100 cards. We were interested in the average overclock and found this at the bottom of the charts page: 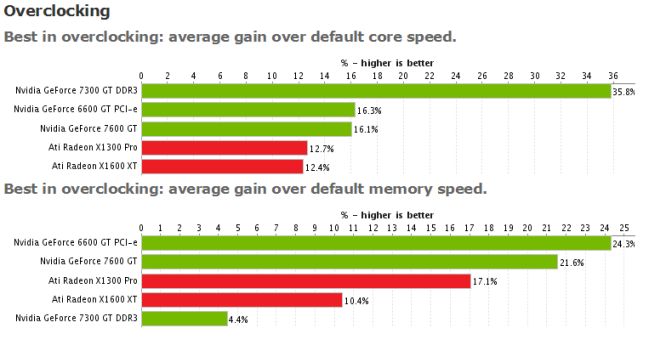 We even included the Geforce 6 series in our search, as the 6600 GT had proved popular in the past, but in the end it was the newer 7300 GT DDR3 (the DDR2 version is not quite the same) we choose to go for. With an average overclock on the GPU of ~35% we started looking for good deal on this PCI Express card. For an attractive €70 we got the units to ship to our participants, the samples were Zotac 7300 GT 128Mb DDR3 PCI Express, from Tecnacom

The Geforce 7300 GT GPU is low end, there is no doubt about that, in our recent 7300 GT vs 8500 GT shootout we got most games to run at 1024x768 with medium detail. We rounded up 20 samples and shipped them to different hardware crazy folk: 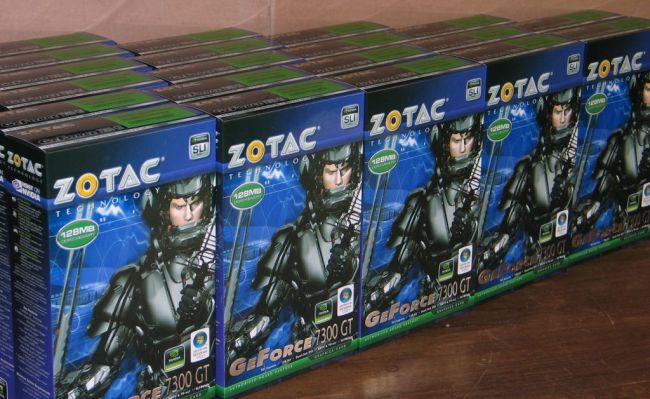 Setting up a contest and benchmark rules

Since this is a VGA overclocking contest and we know most benchmarks are influenced greatly by a faster CPU and/or memory we decided to really tip the balance to put stress on the video card. With help of Futuremark we got our contestants a registered copy of 3DMark2001SE and 3DMark03.

Are you wondering the 2001 and 03 stand for the year the benchmark was released? Yes that’s correct. But that means these benchmarks are seven and four years old! The advantage of these older benchmarks is that they don’t have clue about multi core CPUs and don’t take advantage of this, thus we focus on VGA power to make the difference. To further stress this point we demand the contestants to run both 3DMark benchmarks at 1280x1024 resolution, and only take into account the score received from the “Nature” sub-test. (for a full set of rules please check this page) 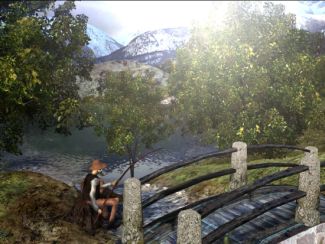 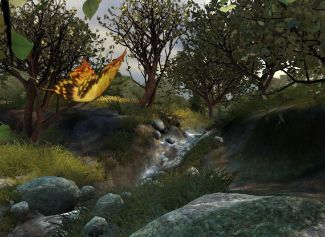 Although the benchmarks themselves are dated, Futuremark has always been ahead of the gaming industry in the “bells and whistles” department, both Nature Tests are from from ugly compared to today’s game engines.

So the players have entered the ring, the rules have been set, the video card chosen and delivered, time to start the overclocking engines. On the following pages you can find updated work logs of the different 7300 GT overclocks, featuring custom cooling modification, voltage modding, sub zero chilling, windows tweaks, driver version deviations, GPU scaling, memory OC’ing and much more. If you want to find out how to get the most out of your budget video card, we’re sure you’ll find some useful info in these work logs.