In our latest CPU cooler roundup we compare 18 heatsinks on an overclocked Intel setup, testing for best performance at both high noise as well as dead silence. If you are looking for a cooling upgrade, this roundup will guide you towards the best product.

It’s almost summer time and our overclocking and silent PC system will need every bit of extra cooling power they can lay their hands on, so we continue our heatsink testing with the addition of four brand new contenders from coming from Thermalright, TTIC, Evercool and ZEROTherm, as well as retest the popular Thermalright Ultra-120 revision “A” heatsink. To accommodate the target audience of some of the new heatsinks they were tested with silent as well as high performance fans, if you’re looking for extreme cooling by use of conventional air cooling, you’ve come to the right place!

These heatsinks were previously tested on the Intel S775 setup: 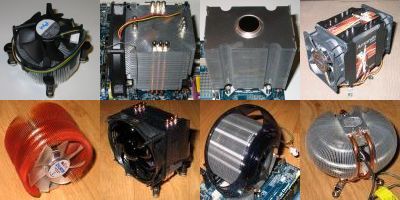 I'm writing and finish today; as finally our hosting server has been swapped/upgraded to a brand new dual Xeon; past week it has been pretty much torture to work at the site with page loads on average of 2-3 minutes

regarding fan tests: yes I have one lined up, no ETA though
Comment from Spanki @ 2007/06/27
Great, thanks - I'll be patient for a few more hours

I'm looking forward to seeing the new additions (and some of the old ones tested on an Intel setup - some of the Thermalrights performed under par in previous results).
Comment from jmke @ 2007/06/27
In our latest CPU cooler roundup we compare 18 heatsinks on an overclocked Intel setup, testing for best performance at both high noise as well as dead silence. If you are looking for a cooling upgrade, this roundup will guide you towards the best product.

we have a new King

Comment from Spanki @ 2007/06/27
Quote:
I'm resisting the urge to jump to the performance charts.. but now you have me intrigued


Quote:
Interesting... even though the base of the BTF90 looks polished and mirror-like shiny, you can still see the machining marks. I think this is the first time I've seen something like that.
Comment from jmke @ 2007/06/27
thanks for correction

Comment from Spanki @ 2007/06/27
Ok, I just got through scanning the performance chart(s) for the first time, but I haven't read your conclusions yet... I thought it might be interesting to compare notes, so the cooler that impresses me most out of the charts is...

TTIC NPH-1000 !
This is the first time I've even heard about this cooler - interesting design, btw - but aside from that, it looks like excellent performance. I personally own the CM Hyper Tx (a 'sleeper' in it's own right) and for the NPH-1000 to match it's performance (cooling vs noise ratio) is impressive (assuming the retail pricing is in line).

I can't actually hear my Hyper Tx with fan on full in my Antec P180 case during the daytime (I can barely hear it in the wee hours of the night with very low ambient noise), so if the NPH-1000 is performing that well with even lower noise, that's even better

The other interesting new data point for me is the BTF90 numbers... good performer, but costs some more noise to get to NPH-1000/Hyper Tx cooling levels.

The Evercool Buffalo put in a decent performance for only having 2 heatpipes, but it's struggling at the top end.

I guess I'm also relieved to see the Ultra 120 performing where it should on the 775 platform - I assume this is the new King of this list (the Zalman just makes too much noise to get to that level and if you added that much noise/fan rpms to the the Ultra 120, it would move well ahead). Of course it also looks like the Tuniq Tower starts closing ranks with the Ultra 120 once you start cranking up the rpms.

I'm sure others are going to ask about other coolers, so some of the heatsinks I'd love to see in this list are:

Arctic Cooling Freezer 7 Pro
Yeah, it's been around a while, but that also makes it a good reference point since so many have been sold

. It should also help round out the Hyper Tx / Buffalo / NPH-1000 bang-for-buck category (and may sit at the top of that, if noise is taken out of the loop).


Thermalright Ultra 90
Similar reasons to above... I'd like to see this one brought over to the 775 platform, to compete in that bang-for-buck-at-a-common-noise-level category


Scythe Mine
While larger than the few mentioned above, it's been out long enough that it's price is starting to get into the <$30 USD range. I know that your previous tests put it almost exactly on par with the (more expensive) Ninja, but it will be nice to see this one on the 775 platform as well (I know you're already planning this, I'm just mentioning it here for completeness


EnzoTech Ultra-X
Fairly consistently performs well in other reviews, even out-performing top tower coolers for some user's setups. Quality control and mounting mechanism look to be top-notch as well. It would also be an interesting comparison to the SI-128 SE, since they both use 4x8mm heatpipes.


Thermalright Ultra 120 Extreme
All indications are that this performs a few C better than the non-extreme version, but may suffer from some mounting issues/differences and base finish (reportedly "not lapped and slightly convex, on purpose").


3R SYSTEM iCEAGE 120 / 90
As far as I can tell, we can't actually find the 120 for sale anywhere in the US (SilenX re-brands the 90 and sells it on Newegg, but the reviews I've seen of the 90 weren't that promising), but I like seeing new ideas (Direct- Touch heatpipes), and it has a replaceable fan, so it would be an interesting addition to your on-going list.

...heck there's others I'm interested in as well, but at some point the charts are going to get unwieldy

(assuming you had the time and resources to test them all).

Thanks again for your efforts.. I'm off to see your conclusions now.
Comment from jmke @ 2007/06/27
will try to add to next roundup:

the others I'll have to check, because the version I have are K8 platform only, Enzotech I can forget, they don't want to send as I'm in Europe , will check for 3R.
Comment from Spanki @ 2007/06/27
Ahh. Shame about the Enzo. In lue of that, another one that might be interesting is Zaward's new Square Advance... it also uses 8mm heatpipes (only 3 of them though), as well as Direct-Touch heatpipes and comes with provisions to mount a second fan, all in a top-blower design (which may only perform well in cases with side vent/fans). The combination of features on this one make it interesting. I'm not sure where they are based, but they have Germany and Japan sites listed (I'm guessing Japan).

Hmm.. as a slight aside, I wonder if Zaward is actually the manufacturer of Sharkoon's golfball fans and/or 3R System's and/or Xigmatek's Direct-Touch heat-pipe heatsinks... they can't ALL have patents on those design features.
Comment from Spanki @ 2007/07/01
BTW, on the topic of other coolers, it might be nice to get some Thermaltake coolers in the list, like the Big Typhoon VX, Max Orb and/or V1. I think most reviews so far have the Max Orb and V1 roughly on-par with each other, some showing the Orb ahead and some showing the V1 ahead, depending on the test configuration.
Comment from jmke @ 2007/07/01
Can't get hold of EU contact for Thermaltake, US guys only cover US, and .TW office not response