When DFI comes out with a new motherboard, the enthusiast community is always listening. And when DFI goes a step further and introduces their first NVIDIA based Intel motherboard, they´ve certainly got our attention as well. Is this the definitive 680i nVidia board that overclockers have been waiting for? We test the DFI 680i LT-T2R overclocking potential with Core 2 Duo and Core 2 Quad CPU to find out...

Diamond Flower Industries or DFI in short, has finally taken the giant leap: they've introduced their first nVidia based Intel motherboard, and to be honest, probably their first really important Intel motherboard since the Intel based 875 Lanparty, which was still based on socket 478. To many of you this might not be major news, but I thought it was worth mentioning anyway. Many have said in the past few years that DFI was incapable of producing good Intel motherboards, and indeed, they have mostly kept their hands off and have - arguably - produced the very best nForce 4 motherboards for AMD's socket 754 and 939.

Why switch sides now, you might ask? I see two important reasons: first, and most important reason, is the fact that DFI had only one representative on the Intel side of things for a long time, in the form of the Infinity 975 motherboard. This was a necessary launch at the time, as they didn't want to lose out on the reigning CPU performance champion, the Intel Core 2 duo. The 975 board was built from the start as a mainstream solution though, and thus was not carrying the famous Lanparty name. By the end of 2006, at last the long awaited ATI RD600 based motherboard was added to the lineup, this time carrying the Lanparty brand. This was a handicapped launch though, because - at the time - AMD had managed to acquire ATI technologies, and support from Intel to the RD600 chipset was completely and understandably gone. This essentially killed off the RD600 chipset, which was a very promising chipset indeed, and degraded it to a "bug support" status, where only known bugs are treated, but no new features or performance enhancements are being implemented. So I guess it was more than time for DFI to introduce a real "top of the line" motherboard which would re-establish the DFI name the way it is meant to be done.

Second reason, in my opinion, is nVidia. Since the acquisition of ATI by AMD, nVidia is more than ready to support Intel and its Core 2 Duo cpu's. Again, it has been said many times that nVidia and Intel don't match, when talking about motherboard chipsets anyway. Those that have made the jump onto the nForce4 for Intel chipset know what I'm talking about: people rightfully wanted SLI capabilities for Intel cpu's, but the solution delivered was buggy to say the least. By the second half of 2006 nVidia had its follow-up chipset for Intel cpu's ready, based upon the 570/590 series on the AMD side, and called it 680i. However not without its flaws (more on that later), 680i is easily regarded as the best Intel solution by nVidia to date, so this time DFI decided to jump on this wagon too, using the slightly stripped down 680LT chipset for the job... 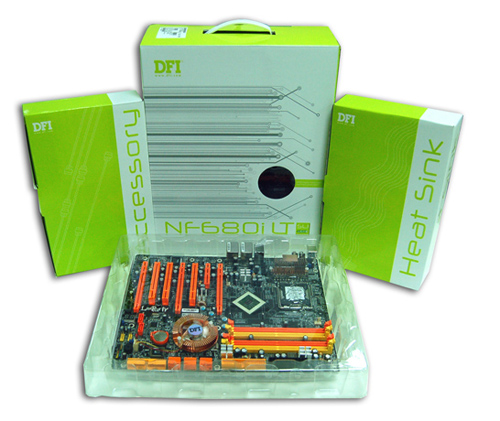 Here's how DFI see themselves in the PC business:

DFI is an international IT expert based in Taiwan , with headquarters in Hsi-Chih City. DFI was established in 1981 by Mr. Y.C. Lu. Dedicated to serving customers with high technology, DFI has been earning a worldwide reputation for quality, owing much to the continuing support from our customers, suppliers and affiliates as well as our own efforts over the past twenty years. With more than 20 years of computer product development and manufacturing, our team of highly skilled engineers helps DFI position ourselves as the standard setter of price-performance solutions in the manufacturing and marketing of computer products.
DFI offers a complete line-up of advanced motherboards as well as graphics solutions and Applied Computing Platforms, to meet the expanding needs of the IT market. DFI also co-develops with Intel and 3rd party developers for the latest technology on IT solution. These relationships lead customers to adopt DFI products with confidence.
With our Headquarter in Taiwan and Regional Offices in the States, Europe, China and Japan, DFI has been stably growing from its start 20 years ago into a leader in the IT field today. Close relationships with Intel, AMD, VIA and SiS ensure that DFI products reach the market with leading timing. DFI products are built with Quality as the rock base.

For those familiar with the DFI packaging, this box might not look familiar. Starting with their 680i LT mainboard, DFI has developed a completely new package for the motherboard and its bundle and in my opinion it’s is a real winner. The motherboard comes in the new black - which is white - with green accents and lettering. On the front a little see through window offers a glance of the Southbridge cooler of the board. At the back of the board, the main specifications are listed. All in all the outside looks very trendy and offers the distinctive look that DFI was no doubt going for.

On the thumbnails below you can find the main package views (click to enlarge).

Upon opening the main box one is presented with a plastic blister which contains the mainboard and two smaller boxes that contain the add-ons of the board. As you can see on the thumbnails below, the first box contains the bundle that comes with any mainboard, while the second box is less usual: it contains the northbridge cooler which hasn't been installed on the mainboard yet.

main contents of the motherboard package, click to open

Now have a look at the bundle DFI provides in the first box of their 680i LT board : 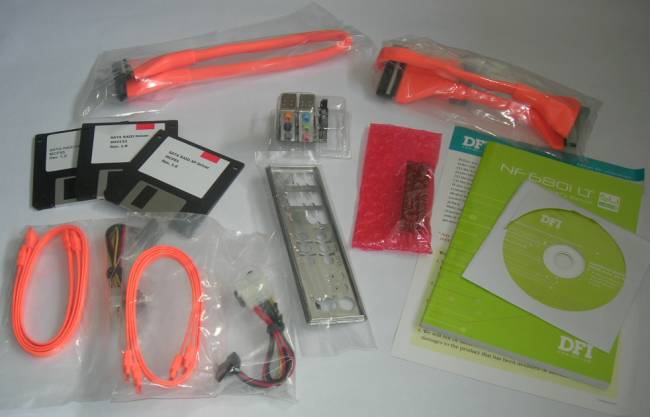 The bundle is very complete to say the least, here's the list with the contents:

However, I must say it, it's a great board to play with. Certainly not the easiest, but a great board for the enthusiast nonetheless.
Comment from Sidney @ 2007/07/20
Better late than never

Comment from Rutar @ 2007/07/20
Quote:
not if even the engineering monkeys from MSI get 500 FSB for everyone boards with the P35 chipsets for less money
Comment from thorgal @ 2007/07/20
Quote:
Uhm, yes and no. P35 is not an SLI motherboard, and will never be. But P35 is a great chipset, no doubt about that. Anyway, most of this is in the article's conclusions already

edit: you were a few seconds earlier

Comment from blind_ripper @ 2007/07/21
nice review thorgal (big daddy)
say are u comming to lanscape , wanted to talk over msn but evry time no awnser
Comment from jmke @ 2007/07/22
this is not the place to contact him for off-topic matters

PM or email the big daddy