Lian-Li redesigned some of their more popular chassis with a different front, to include blue leds; their most active research went into HTPC cases, with compact system able to fit Mini-ITX motherboards with Quad-SLI GFX setup; 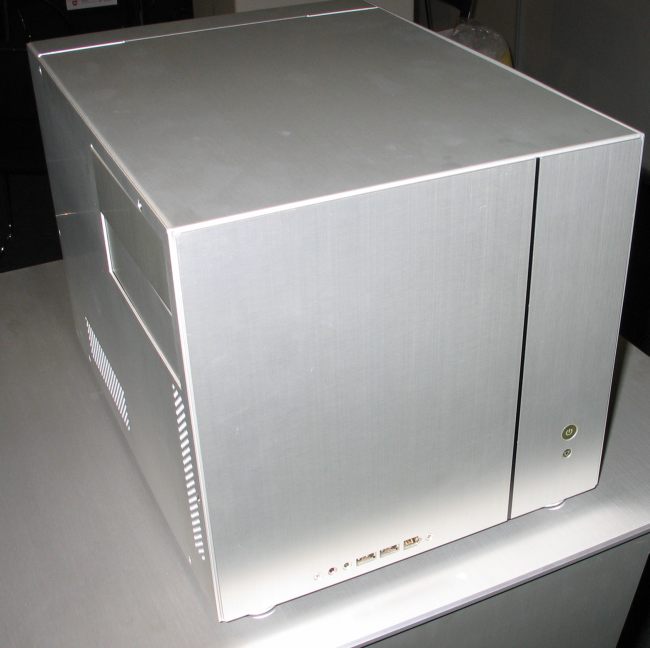 MSI was publically showing NVIDIA’s latest mid-range DX10 graphics cards, they only “forgot” to mention the actual product name, making it a bit of a guessing game. 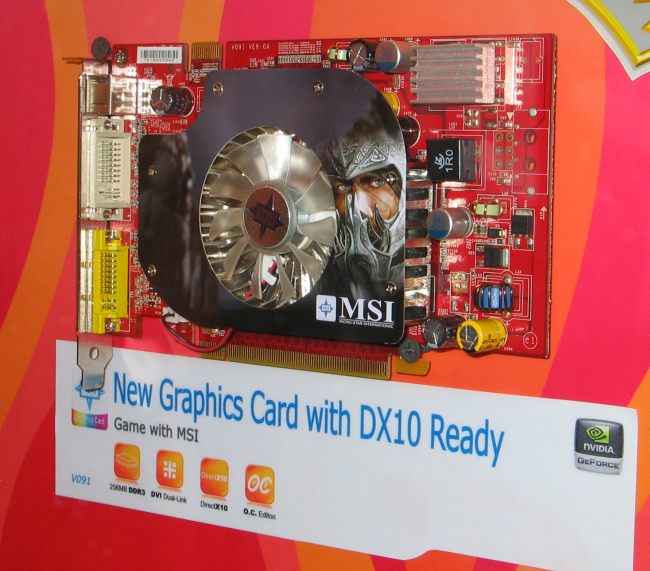 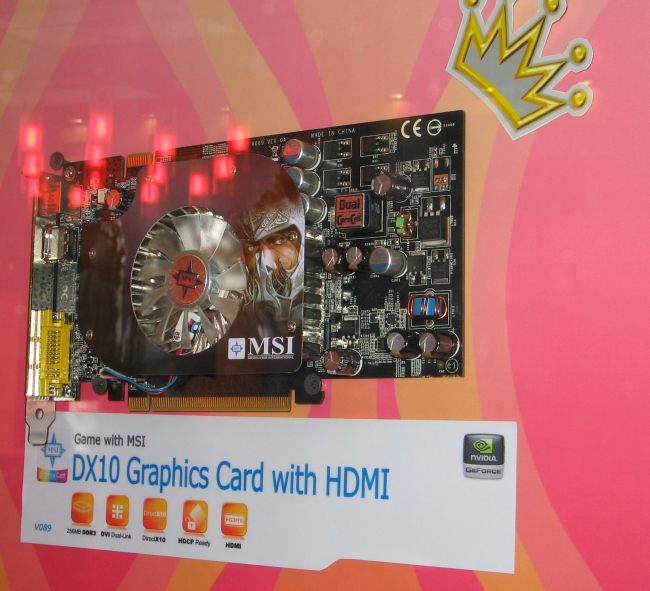 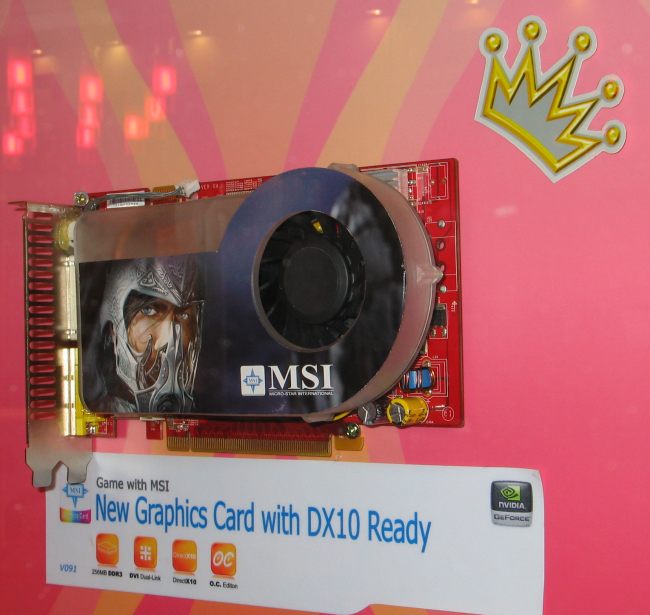 They are not using the reference PCB design, because that is slightly different, below the thumbnail on the left is the NVIDIA reference 8600 GT, notice the absence of the 6-pin power adapter, this card will score ~47xx in 3DMark06 on a Core 2 X6800 system. On the right is the NVIDIA 8600 GTS with 6-pin power connector, if you don’t overclock it will run without extra juice hooked up though. The GTS scored ~57xx 3DMark06 on the same X6800 system; This makes the card slightly faster than the 7950 GT.

The photos above did not come MSI, but we included them so you can compare :).

MSI has released a limited amount of water cooled Geforce 8800 GTX and X1950 XTX cards, the G80 had the pump on the VGA card itself, the AMD/ATI cooled looked more like the Thermaltake Tide Water unit. 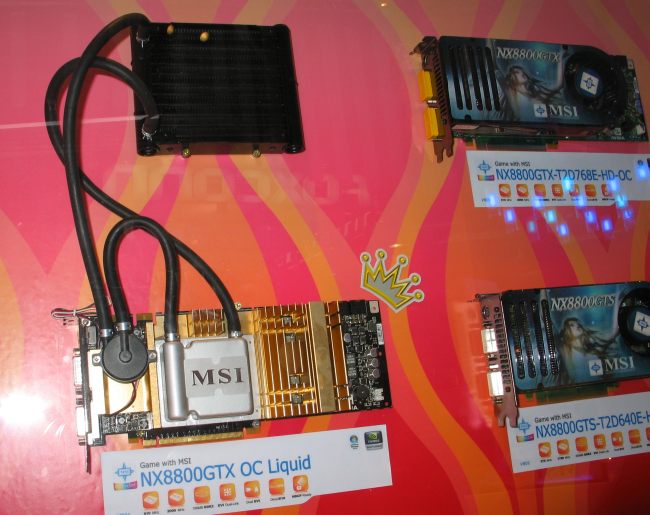 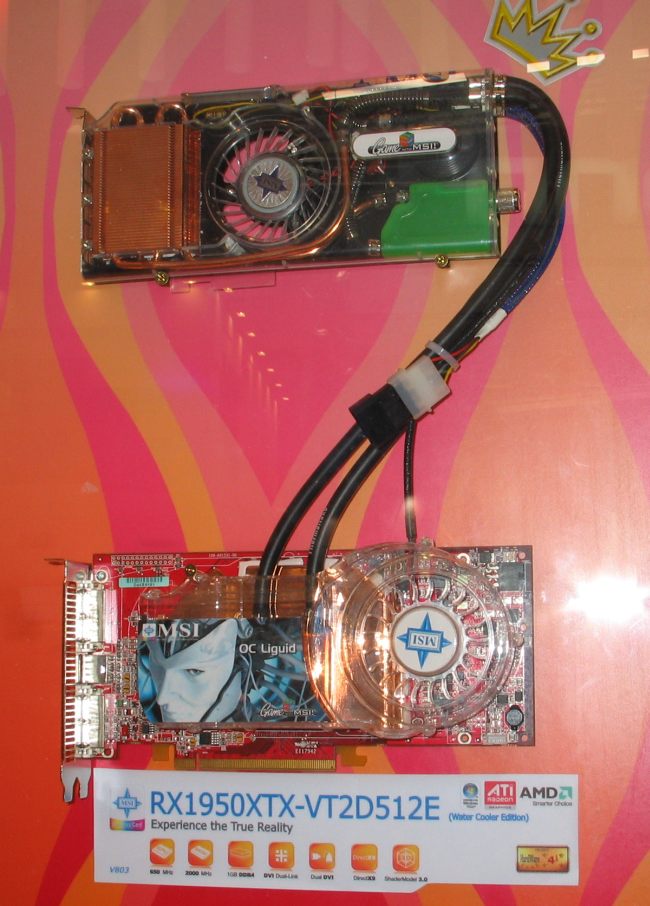 The Radeon X1950 Pro has proven to be a very popular choice for budget minded gamers, the MSI version comes with a massive heat pipe heatsink to cool the card without fans: 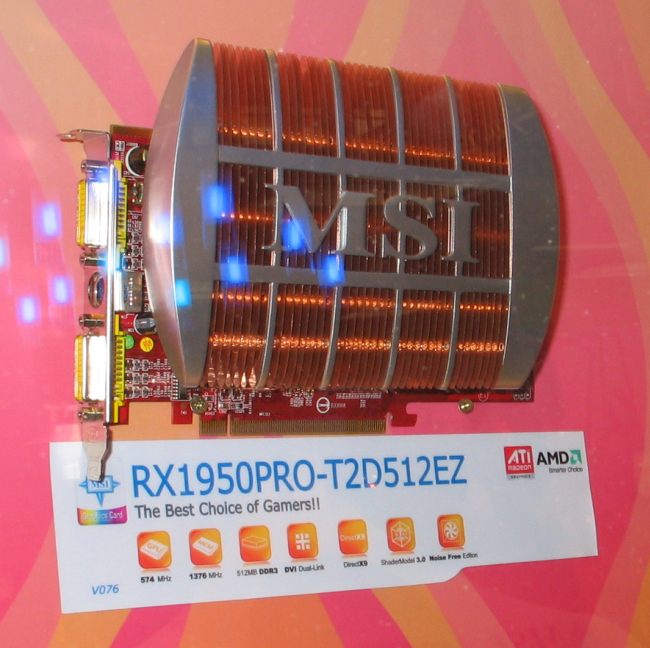 Over to motherboards, a lot of Intel P35 based boards on display, with demo systems running DDR3 on the X38 chipset. On the AMD side they have a small ITX board based on the latest AMD chipset, but they added a HDMI connector for full HTPC ready action.

MSI dragged along an oven to demo their live motherboard testing procedure, a complete system with motherboard, CPU (with Intel stock cooler), RAM and VGA were placed inside the oven and set to cook at 70-80°C ambient temperature; the system was running stable without crashing… impressive! 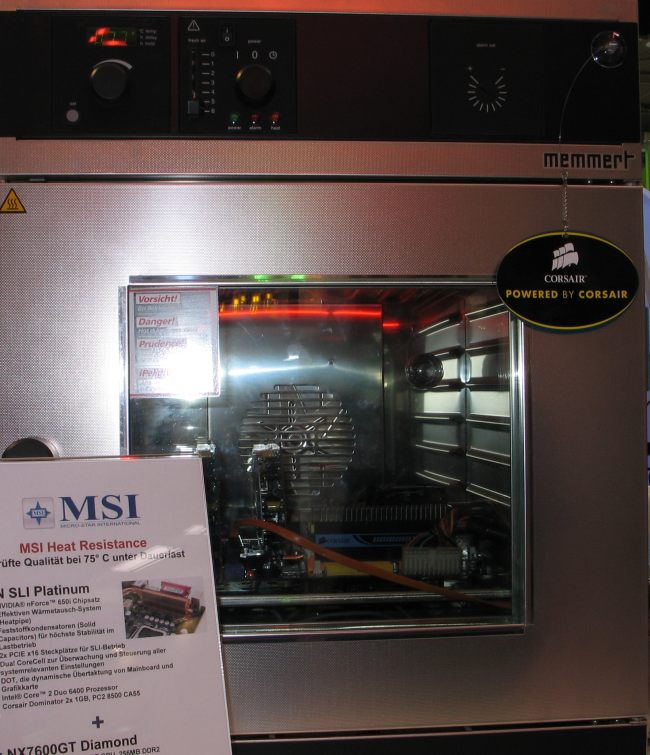 For the notebook fans MSI has the latest and greatest chipsets and videocards integrated into compact designs as well as 17” wide screen laptops. Solid State drives are set to be used in upcoming models, currently they were showing their notebooks with normal 2.5” drives. Swarovski and computers normally don’t have much in common; MSI is changing that by using Swarovski Crystals on some of their notebooks:

quote from that page:

Quote:
quote from our article:

Quote:
and then this: http://hightech.afmag.net/about/