With the TJ09 Silverstone is focusing on airflow to dissipate the heat of Dual/Quad core processors and especially high end VGA cards. Their design is classic elegant with functional and clean looks. This is a high end product made for high end systems, can it keep a Core 2 / Geforce 8800 GTX cool enough? We find out.

Silverstone has been known to follow the latest hardware trends, and their latest high end enclosure doesn’t change this. The last time Madshrimps reviewed a high end tower case from Silverstone was back in December of 2004, the TJ06 or Wind-Tunnel case was based around a BTX-like layout for ATX system, the CPU sits at the bottom at is the main target for cooling. At that time the Pentium 4/D with ever increasing heat output was at the center of the stage, and got the most attention when designing a cool case layout.

Since then tables have changed, and with Intel dropping the hot Pentium potato the focus is shifting to the new hotness, graphics card makers were quick to pick up the ball where Intel left it, with NVIDIA’s G80 and the upcoming R600 the thermal envelope of compact air-cooling is pushed to the limit.

Silverstone answers to these thermal challenges in the TJ09 which is their new flagship tower case, designed around focusing on VGA cooling with a unique approach. 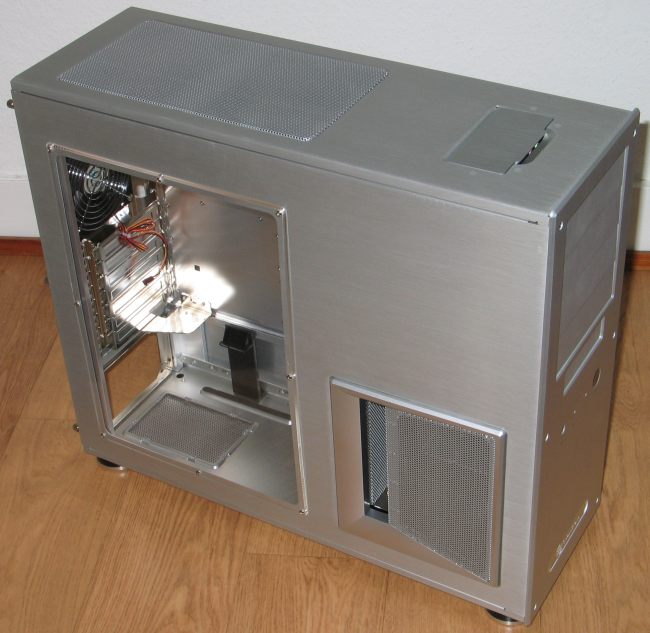 The window you see in the side panel is optional, what stands out the most is the rectangular cutout right behind the grill, this is where the VGA cooling is placed, but more on that later. 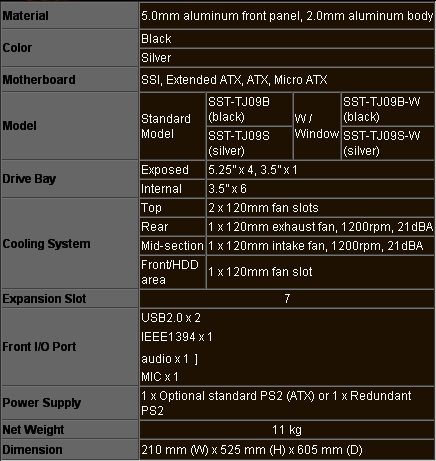 The TJ09 is roomy and the specs don’t hide it, up to 5x120mm can be installed, the case comes with 2 already, rated at 1200rpm I found them quite silent even at full speed. The case is relatively heavy at 11kg without hardware inside, but I don’t want to know how much it would have been if Silverstone decided to make a steel version.

Up to 6 hard drives can be placed in the drive cages in the front, with dedicated optional cooling fan. The PSU sits at the bottom of the case and there’s enough room for the even the longest models.

Size wise the Silverstone is remarkably long, see below for the photo comparison with the Coolermaster CM Stacker 830 Evo and Antec Nine Hunderd Cases: