Want to upgrade your Athlon Thunderbird? Take a look at latest XP1700+ & XP1800+ samples from the AMD farm, sporting a thoroughbred core and lots of overclocking potential. Can the older Abit KR7A tame this CPU ?

Last year, with the coming of the Northwood Pentium 4, AMD was beaten at its own game. The NW P4's are able to obtain great overclocks and got you performance "for free".

The first Athlon XP processors were able to achieve 100-200Mhz overclocks and some even up to 400Mhz but those were hard to find. AMD was losing ground to Intel, PC enthusiasts upgraded to P4 rigs because they allowed 50% overclock without much effort or expensive cooling. With more advanced cooling methods you were even able to reach 100% overclocks (P4 1.6Ghz running at 3.2Ghz).

Now AMD is back with a budget minded vengeance! The first "new" Athlon XP with the Thoroughbred core was only for the higher rated models (XP2200+ and up) and although they do deliver good performance at the rated speeds, they overclocked only marginally.

Recently however AMD has been rolling out their slower models equipped with the tbred core, Low-End Tbred's as they are now known. As with the older generation of Athlon XP, each CPU has a CODE written on it. Depending on these numbers and letters overclockers found some to be much better then others. An AGOGA core of the older Palomino core was good for a >1800Mhz CPU.

Now with the low-end Tbreds we see the same thing happening. The Tbred core has had an A version and a now most of them are B versions, it is with these gems that new highs can be obtained!
In the picture below you will see 2 lines of text under the letters "AMD Athlon™". I won't go into detail of the 1st line, there is already a very complete guide which explains you what every letter and number stands for you can visit it right here.

The 2nd line however is more important to us, as it tells us a bit more about the version of the core (JIUHB) and the year (03) and week (02) it came rolling out of the factory.

By surfing around some forums and reading other users' experiences I was able to figure out that the JIUHB core version is a real champion when it comes to overclocking. The week and year in combination with the core version can verify if you have indeed the exact same sample of the low-end Athlon XP tbred or not. 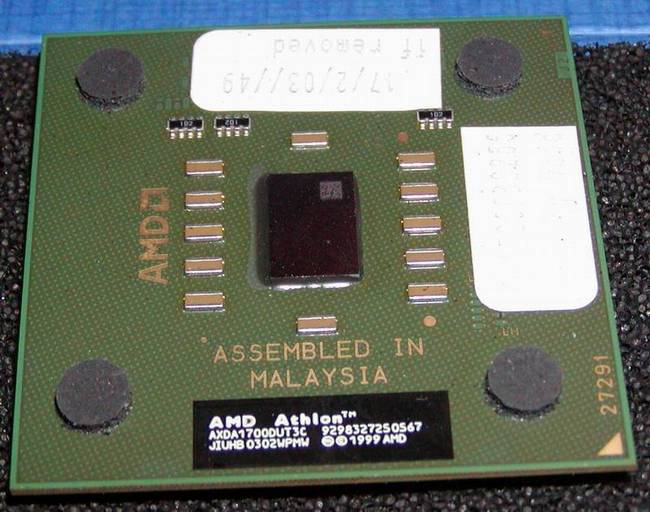 If you have read up on what the 1st line means, you should have figured out that this is an Athlon XP1700+ , running at 1466Mhz.

The default vcore that is supplied to this CPU is 1.6v. Most motherboards allow you to increase this to 1.75v or 1.85v. If you have sufficient cooling power then pushing 2v through these CPU's will result in some impressive speed increases. But let's not get hasty, because even at their default voltage they can show you their muscles!

To give you an idea how much "free" performance you can get from these Low-end Tbred's I'll start by running some basic benchmarks with the CPU running at default speeds. Let's see how the system performs...