NZXT ZERO Case Review: How quiet can seven fans be?

The NZXT company is young, yet their cases have already gained a solid foot-hold on the market. Today we test the ZERO, a case with a total of seven 12cm fans and a 8cm top mounted fan. Does it move around the floor on its own? Can it double as a hovercraft? Read on...

NZXT ZERO Specs
The title of this review may be somewhat misleading since the ZERO actually uses a total of 8 fans 7 120mm fans and a single 80mm top mounted fan. I failed to mention it because other sites had problems fitting in standard size PSU's without making some adjustments and I was unableto use it intenrally. My system used PCPower&Cooling's Silencer 750W which is a standard size PSU yet I was unable to mount the fan. I did mount it externally for thermodynmic purposes, but the average end-user should not have to explore ad hoc methods. Given many buy cases for their appearance amoung other things, the fan mounted externally looked awkward. 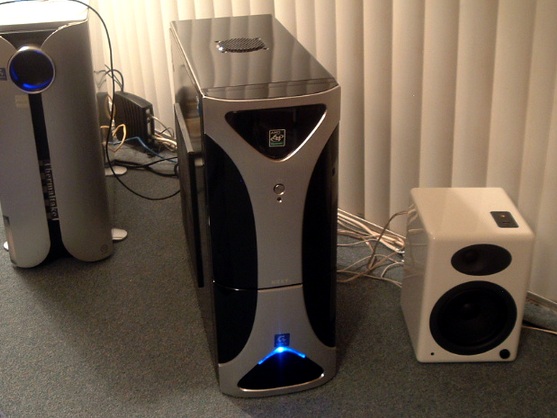 Above we see our ZERO in reference to another full-tower case (Thermaltake Kandalf) the ZERO is a smart looking design at 210 x 532 x 520mm. The Kandalf has more depth which translates to more room inside for components, although I find the ZERO provides ample room in many respects and while their both made from aluminum ZERO weighs less, runs cooler and is much quieter. 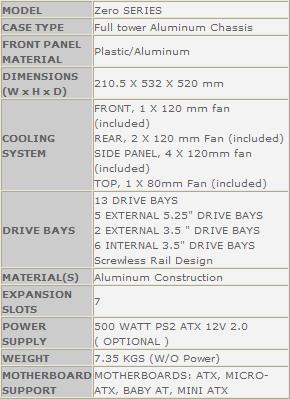 The ZERO arrived in-tact (not that we should expect any less) packed well in protective plastic and secured by Styrofoam braces just in case of unforeseen shipping "issues." 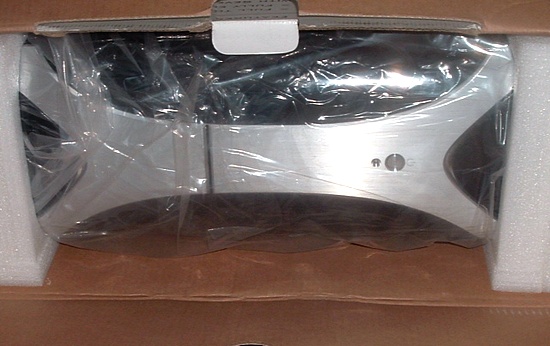 Once freed from its packaging bonds, ZERO sports a sleek black finish and a brushed solid aluminum section on the faceplate/door. The design is understated yet sophisticated making the ZERO an ideal case for any possible environment, including office, home or the sophisticated Gamer. From an ergonomic perspective ZERO is most definitely a departure from other NZXT cases such as the Nemesis Elite I reviewed some time back. 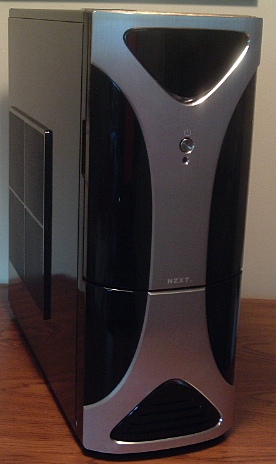 The chassis is constructed primarily of aluminum except for the front door which made from plastic with a thick aluminum face-plate as mentioned above. Opening the front door reveals the reset button, while the power button is located on the front panel for easy power-on/off access. 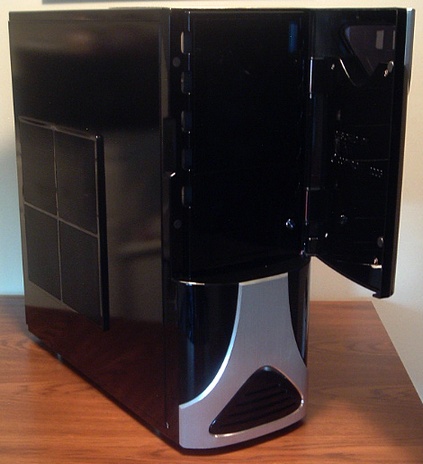 At the top of the door NZXT provides a tinted window which allows visual access to 5.25 LCD devices, a smart addition. 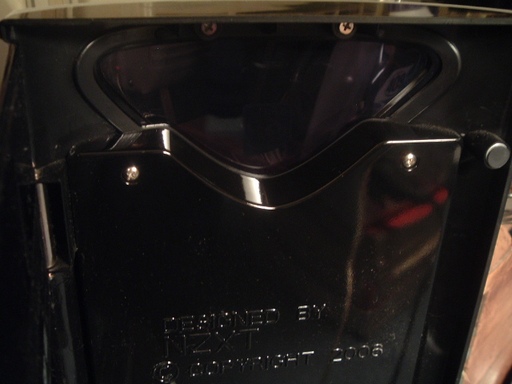 Located along the side of the door I/O ports are accessible yet hidden from sight. These include a single Fire Wire, headphones, microphone and two USB connections. Thumbnails below provide a close-up of the connections and the opposite side of the front panel the PCB hosting those connections. 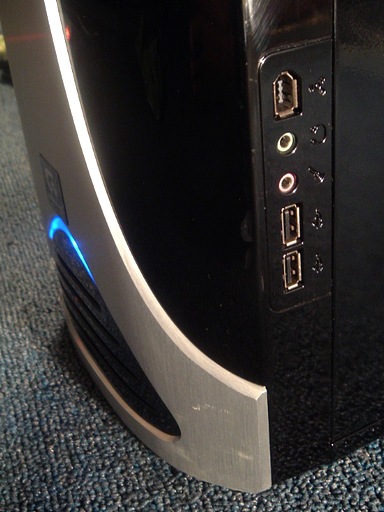 Removing the side-panels reveals all aluminum construction and carefully beveled edges preventing injury. The ZERO is essentially a full-tower design; while NZXT doesn't specify material thickness this case is very light at 7.35kg. Note the on the bottom of the case there is a passive vent with filter. 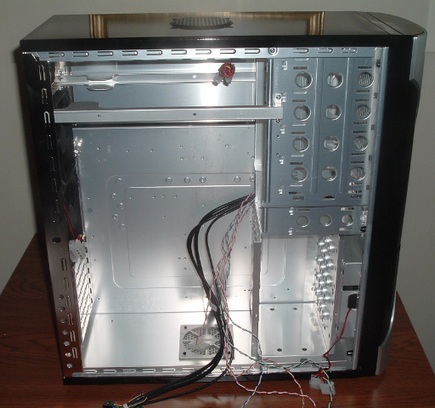 Looking into the case from several angles we see the twin rear mounted 12cm exhaust fans and internal; drive bays. The accouterments are laid out in front of the case. 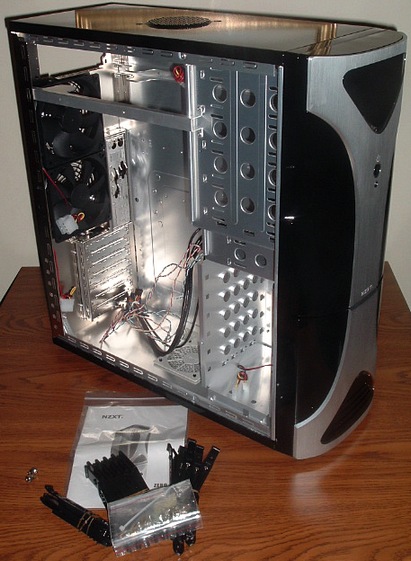 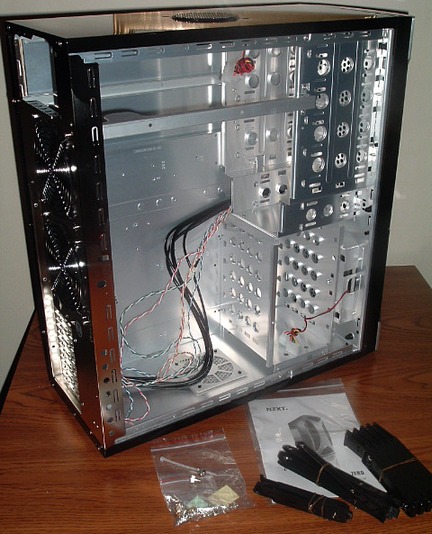 Depending on the type and number of optical and HDD drives the drive bays should provide ample expansion. As previously stated there are six internal drive bays which face out with the side-panel removed providing easy access to other components such as video cards and other PCI devices. The 8800 series cards will be a little tight, thankfully those card use an outward facing 12V PCIe external cable. Clutter wasn't a problem with this case depending on what you want to install. Thumbnails below focus on the top and bottom drive bay sections respectively. 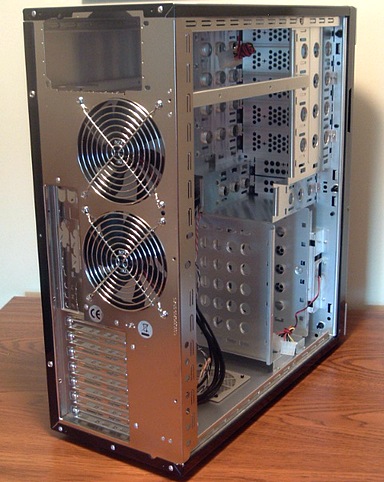 Onto case airflow and fans ->
Comment from KTMitch @ 2007/03/09
Wow, that has to be one of the best reviews I have ever read for a computer case, and I have read quite a lot recently. Liquid3D, you really know your stuff.

The aero- and thermal-dynamic information was interesting and enlightening. And the case review itself was thorough and descriptive. The only subject I saw missing was a mention to how easy the install process was.

I have four questions about the case.
One: What is you're take on the quality of the front door? The review on hexus.net thought it was particularly cheap feeling. But their entire review seemed to be negative.
Two: How easy was it to manage wires in the Zero? I've read a couple of complaints that there is very little ability to manage wires efficiently in the case.
Three: How is the exterior finish? I am not entirely convinced on the 'orange-peel' finish. How easily does it smudge?
Four: Would you use this case as your own rig (in an air cooling situation)?

Overall, this review has definitely piqued my interest in this case.
Comment from Rutar @ 2007/03/09
I like that company, 6 120mm fans

Comment from Liquid3D @ 2007/03/12
Quote:
Sorry about those areas I missed. Sometimes while trying to focuson one subject I may negklect another. Recently I have noticed the exterior does smudge. it's easily cleaned and as long as you don't handle the case too often it's not bad for the finish.

The front door is made from plastic and aluminum, yet it's only about one thrid of the front panel height, so it's not that problematic. I can understand why they would think it was "cheap" feeling, but it works and while my Kandlaf case doors are solid aluminum I don't like the sound of the aluminum scraping against aluminum when they close or if their not closed in the right order they don't close. I'm not picking on the Kandalf it's just an example of what I have here right now. The door on the ZERO is made the way it is so the power switch could be accessable from the outside. Of course the Reset button is inside and I was pressing that button for the first 30-minutes after I built the rig until I found the power button arounf the front hehe. They should have kept them both exterior.

The wires were another area I missed, it does get a little crowded in there, however; I didn't mention it because I haven't found many cases where this isn't a problem with sleeved cables. Ironically as their supposed to ,make things neater, they tend to be bulky. PCPower&Cooling in their effort to produce the finest quality has made their ATX power cable especially stiff, but the problem seems to be case height and depth. If you want your case a little smaller like the ZERO you do make sacrifices.

Installation wasn't really a problem so long as you are organized. Don't try to install memory after you've got all the other devices in, be sure to hook up IDE connectors before power cords. I took all the cords from the PSU (as I usually do) and tape them up to the top of the case to clear room for mobo installation second (PSU is first).

Finally would I use this case in my own sysytem if I was air-cooling? Well if I could have it for $109 it 's better then some cases at $160 but it's not better (in theory I haven't tested them head to head ) then the Antec 900 for $119 at Newegg I would recommend this case over the ZERO and thanks to you I will amend my article.

Thank you for writing in here's the link to the Antec 900 and here's JMKE's article on that case. In his conclusion he stated filters are a problem, and steel makes it difficult for LAN. This exemplifies how difficult a time end-users have finding a decent LAN case so they're dragging along their tower cases. You have to figure it this way, if you want top show off your best at a LAN Party Host One! Or when you buy your next high end rig don't sell the parts from the old one and search for a LAN case that will hold them.

Anyway you can see why I wrote that intro, case makers are hitting the mark in one area and missing the point in another. We should have to make sacrifices for a $100 plus case, meaning at the least the it should be capable of extricating heat from the enclosure. Aluminum isn't that costly and you can use Lucite if the airflow is correct. All it takes are several well placed fans and filters on each (except exhaust) so I pull my hair out in frustration and feel your pain.
Comment from stevem @ 2007/03/13
Good overview of thermal flow, Liquid3D. It's surprising how many case designers make poor choices regarding thermodynamics, flow dynamics & pressure, when this stuff has been modelled since the inception of the ATX spec. It's not as though cost would be severely affected, either...
Comment from KTMitch @ 2007/03/13
Wow, thanks for the quick and in-depth reply!

It is entirely understandable that you missed some subjects. Its almost expected for such a well written (and large) article. And it should be the job of us readers to point out any issues.

I'll definitely take a more detailed look at the Antec 900. From jmke's article, it sounds comparable to the Zero. Its my personal opinion that the Zero looks better, however.

I wholeheartedly agree. There seems to be a rift between the case manufacturers and the consumer. From the points you guys have made, to the simple location of front USB and audio connections, the manufacturers seems to be totally disconnected from the real world demand.

You've made a fan of me. I'll be happily awaiting more case reviews.
Comment from Rutar @ 2007/03/13
Quote:
brushed aluminium is the best material to make anything out of it, especially when everything else is plywood and plastic nowadays

Dust isn't as visible on it and fingerprints are not an issue and it feels good.

The shiney black plastic that is so dam popular today for many thngs but it won't look good the second you took it out of the packaging.


I think doors in general are stupid for 90% of the users yet so many cases have them (especially if you are too lazy to look for no-cd cracks).
Comment from jmke @ 2007/04/26
Hey Keith,

I just finished testing the NZXT Adamas which has 4x120mm fans, same model as the ones in the Zero, perception of sound can be quite different between people

I find these 120mm fans at 12v to quite noisy, far from dead quiet; especially compared to a 1200rpm Papst or 800rpm Noctua.

at 50cm the noise difference is definitely noticeable (about 4-5dBA) between the 2x120mm NZXT fans and 2x120mm Papst/Noctua setup.