XFX Geforce 7600GT Fatal1ty - Cooler and Faster than others

With the official release of the NVIDIA G80 based high end video cards in November last year, it is only a matter of months before we see new mid-range mayhem released for every budget minded gamer out there. At the very last moment XFX decided to satisfy gamers with one of the last G70 based video cards, their 7600GT Fatal1ty edition features passive cooling and faster clock speeds at a competitive price. How much faster? We find out.

With the official release of NVIDIA's G80 in November last year, it's only a matter of months before we see new mid-range mayhem released for every budget minded gamer out there. At the very last moment XFX decided to satisfy gamers with one of the last G70 based video cards, let's find out how XFX is going to charm us...

XFX is a global presence in the world of electronic gaming. With its focus on taking gaming to the extreme, XFX has developed an exciting array of video cards and accessories that are designed to maximize the entire entertainment experience. A division of PINE Technologies, XFX operates its own manufacturing facility and maintains an R&D team that features some of the industry's most renowned talents. 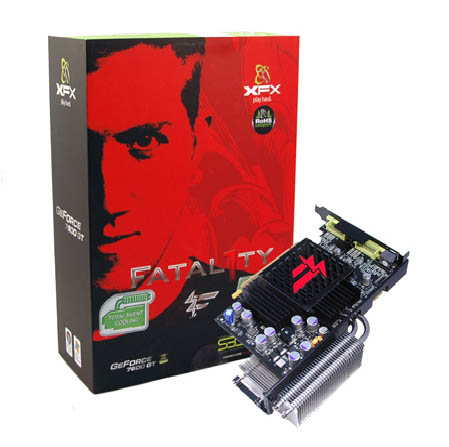 Johnathan "Fatal1ty" Wendel became the world's first full time professional video gamer in October 1999, when he placed third at the CPL's Frag3 tournament. Two weeks later he was invited to represent the USA in an international tournament in Stockholm, where he went undefeated with a perfect performance, winning all 18 maps and losing none. He has continued to dominate competitions all over the world, competing on 6 continents during his 6-year professional career.

Winning the 2005 CPL World Tour Finals in New York City secured his twelfth Major Championship and tenth world title, accomplished while competing in 5 different games - an unprecedented achievement. His New York City victory earned him $150,000 and brought his 2005 total winnings to $231,000. During his competitive gaming career Fatal1ty has placed 1st in 65% of all the competitions he has entered and top 3 in 90% of them. Visit www.Fatal1ty.com to learn more.

The 7600 GT marks the first release in the XFX/Fatal1ty partnership announced earlier this year. "This card proves that teaming XFX technology with the hardcore gamer's demands results in performance that buyers literally haven't seen before," said Eddie Memon, Vice President of XFX. "With Fatal1ty doing his best to challenge our capabilities as a development team, and our efforts to impress and outperform his expectations, the card not only stuns visually, it delivers the goods in efficiency and state-of-the art performance. It is truly for gamers by gamers."

Which is another extreme case, i know, but just as valid. The problem is that they don't mention the system test configuration
If you look at how cs:source scales, you see a big cpu bottleneck at 1280x1024, with all the cards performing the same, and only some spacing apart as the resolution increases. If you'd only look at that one resolution, you'd draw the wrong conclusions.

unfortunately Geoffrey changed test configs, so he couldn't reuse the numbers of his X1950Pro tests, the cards have been since send back to companies.
Comment from flokel @ 2007/01/28
Can somebody tell me how high the 7600gt fatality is ?

I'm worried if the card fits in my silverstone lc-16m

will be interesting to compare these cards, don't ya think

will be testing them the coming week; shown down of NVIDIA low/mid end