When it comes to high performance memory, Kingston has a name to keep up in the business. We already took some memory kits from Corsair, Team Group and OCZ for a spin, but Kingston was noticeably absent. About time we set this right, and we do this today by looking at two of their products: the PC6400CL4 and PC8500CL5, both 2Gb kits. Let´s see how they stack up against some fierce competition...

Up until now we have been fortunate to test several DDR2 memory modules from some of the major manufacturers: OCZ, Corsair, Mushkin, Team Group. Noteworthy absent from this list has been Kingston, the largest independent memory manufacturer in the world. To introduce Kingston to our memory performance table, we present you two DDR2 parts of their top of the line "HyperX" line-up today : the KHX6400D2LLK2/2G and KHX8500D2K2/2G.

In 2005, Kingston was the largest independent memory supplier (for the third party market) in the world and this for the third consecutive year. Here's how they see themselves:

Founded in 1987 with a single product offering, Kingston® now offers more than 2,000 memory products that support nearly every device that uses memory, from computers, servers and printers to MP3 players, digital cameras and cell phones. In 2005, the company's sales exceeded $3.0 billion.

With global headquarters in Fountain Valley, California, Kingston employs almost 2,900 people worldwide. Regarded as one of the “Best Companies to Work for in America” by Fortune magazine, Kingston’s tenets of respect, loyalty, flexibility and integrity create an exemplary corporate culture. Kingston believes that investing in its people is essential, and each employee is a vital part of Kingston’s success.

Have a look at the memory modules of the day, side by side in their boxes: 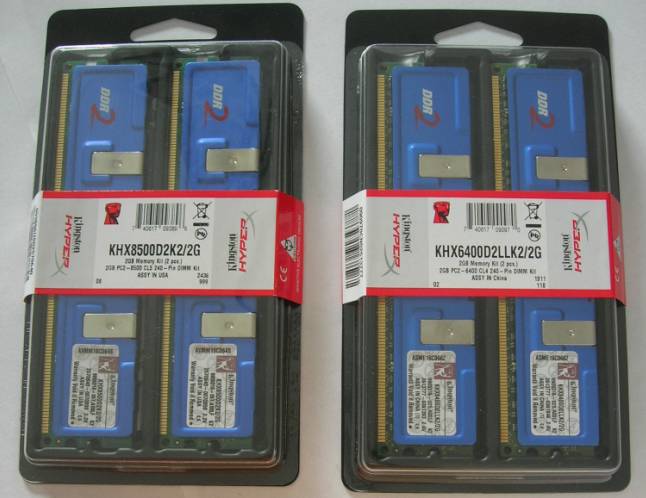 As you can see, the package is the basic plastic, black, and very compact memory case which is opened by removing or cutting a single sticker. Inside the box we find the memory (duh), accompanied by a clear printed manual.

open box, manual front and back

Once unpacked we get a look at the two pairs of memory sticks: 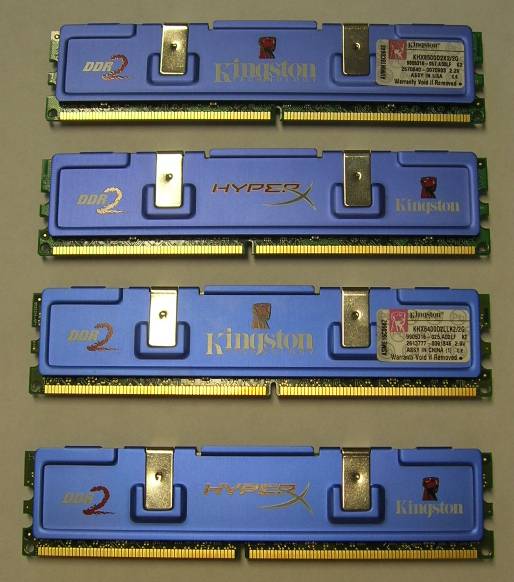 We certainly will have to be careful not to mix the memory modules around in our test setup: the PC6400 and PC8500 parts are only differentiated by the specifications sticker which is present on the front of all modules.

Comment from Sidney @ 2007/02/21
Indremental Money spent versus incremental performance/value received.
Comment from jmke @ 2007/02/21
for none OC'ers, this article still is true
http://www.madshrimps.be/gotoartik.php?articID=472

cheapest PC6400 DDR2 ram more than enough to satisfy COre 2 bandwidth needs
Comment from Sidney @ 2007/02/21
Agree; unless you get a processor that can do +500 FSB everytime, finding mobo and memory become secondary and relatively easier than the formal.
Comment from jmke @ 2007/02/21
I think most E6300 can reach 500+, just need a mobo that can do it