For those that do not want to break the bank just for a pair of performance memory sticks, we´ve got a promising PC6400 DDR2 kit from OCZ, let´s find out how it stacks up to the competition.

Today we would like to present you a new DDR2 kit to include in our memory performance comparison table. In our previous article we have taken a look at some high end DDR2 kits from Mushkin, Corsair OCZ and Team Group, but the market for mainstream memory is of course much larger than that of the high end kits, and of interest to a lot of you people out there. That's why today we want to present you a first, very promising, PC6400 kit, the OCZ PC6400 Special Ops Edition "Urban Elite".

For those that aren't familiar with OCZ's ram, here's a word on the company : OCZ is one of the premier manufacturers of memory modules, and one of the biggest players on the international market. OCZ technology was founded in 2000 and has established quite a name for producing high end ram products, especially among the enthusiast community. Since early 2004, OCZ also produces high-end power supplies. For now, memory remains the most important branch in OCZ's product catalogue, but that might change in the future : just a couple of days ago, OCZ announced that it would go into the cooling market in a more aggressive way, by introducing phase change and water cooling products. Maybe even more surprising: in 2007, OCZ will be introducing their first graphics card, backed by nVidia. The first to arrive will be some high end 8800 GTX cards, but others will likely follow suite. For many products, OCZ has received praise from reviewers around the world, and we can only hope that they continue their efforts in the future.

Here you have a first look at the fresh arrival: 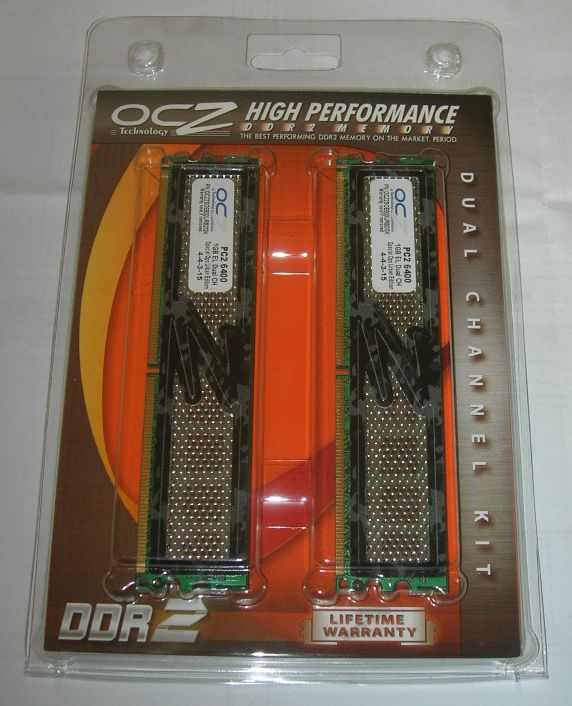 As you can see, the nature and look of the modules is clear from the first view. What I like about this kind of packaging is that it can be easily opened, without breaking all the plastic, but especially that it can be easily closed again as well. Now for many of you this is of little importance, as the modules will be taken out, and the package forgotten about, but for us reviewers it's quite neat. If we open the package we find a folded cardboard manual inside. Memory manuals are almost never mentioned in a review, as they are mostly non-existing or impossible to read or look at, but this time things are different. OCZ has gone through the trouble of designing a nice, five language manual with clear diagrams, and for this they deserve my respect. I took a picture of the manual and added it in the thumbnails below.

The full name of the kit we're reviewing today is the OCZ PC6400 "Special Ops Edition" (SOE) "Urban Elite". Quite a mouthful and the memory is as such a part of the "special edition" section of OCZ ram. OCZ has been bringing out a lot of new memory lineups lately, like the nVidia and ATI certified modules, and some other Special Ops memory kits as well... This "Urban Elite" version is positioned at the top of the "Special Ops" mini lineup.

Now if you've got all those lines of memory a bit confused by now, don't worry: you are not alone! OCZ has been diversifying their existing memory line-ups as well lately with several sub branches, so much so actually, that it becomes difficult sometimes to see the trees through the forest... Especially for novice buyers, things can get a little confused: OCZ has so many PC6400 parts out there, many of which have a lot of similar specifications. I will go a little deeper into this on the next page; first let's have a look at this module's specifications.

Here are the complete specifications for these modules: