We test four 120mm fans which aim to provide lots of airflow at low noise levels. In this roundup 2 models from Noctua and 2 from Sharkoon are compared to one of the best from our previous 17-fan roundup.

Noctua and Sharkoon fans on display

The NF-S12 family has 2 members, a 1200rpm and 800rpm model, they both come in attractive retail packing and have all the necessary goodies inside to set you up with silent cooling. 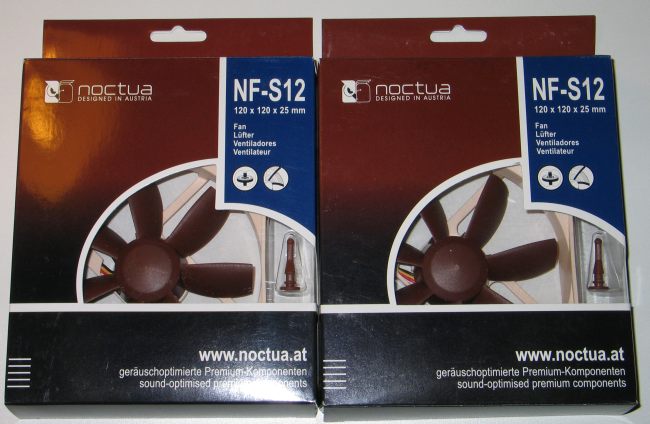 Inside the package you’ll find a low-noise-adapter which reduces the voltage to ~4v and let’s the fan become virtually silent. The light weight fan blade design allows the fan to start without troubles at this reduced voltage. Both models also come with 3-pin -> 4-pin power adapter and mounting screws. If your case allows it you can also mount the fans with included soft rubber mounts which help reduce vibration noise.

The two fans are visually identical, without the product name sticker you’d be unable to keep them apart. The fan blade design is quite different from the other fans I’ve tested in the past. They are thinner but are more angled to increase airflow at lower rotations. The trade-off is a decrease in pressure.

The bearing used by Noctua is quite out of the ordinary, the SSO bearing:

The rotary motion of the axis generates pressure upon the special oil enclosed within the bearing. This causes the build-up of a dynamic pressure field that centers and stabilizes the axis within the bearing shell. While conventional liquid bearings employ the principle of hydrodynamic pressure too, the SSO bearing is equipped with an additional magnet that supports the self-stabilization of the rotor axis. This allows for a faster, more precise and more reliable centering of the rotor axis and thus increases the long-term stability and quietness of the bearing

The power cable is about 40cm long is sleeved.

I previously tested the 80mm variants of the Silent Eagle fans from Sharkoon, this time around the 120mm models are on the bench. One at 2000rpm, the other one runs at only half the speed. The blade design features a “golf-ball” like pattern which promises to deliver more airflow at lower noise levels than a regular designed fan blade. 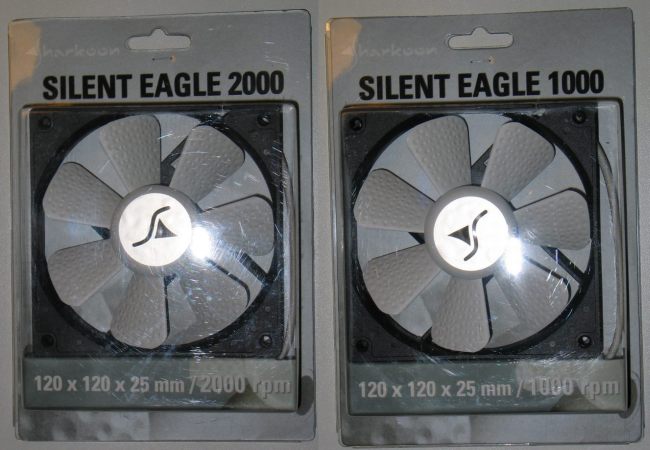 In the package of the Silent Eagle you find 3-pin to 4-pin power adapter, mounting screws and anti-vibration soft rubber mounts (and installation manual).

Both models are identical, I wish a model name was put on the sticker of the fans to help keep them apart, as well as create product name awareness, as there is no mention of the company or product name on the fans except for the small logo. (I wrote the name on them to prevent a mix-up).

The power cable is sleeved but quite short, measuring only ~25cm. 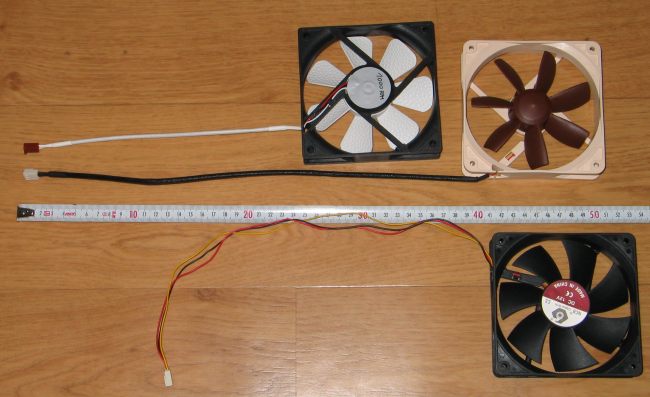 The power cable of the GlobalWin fan didn’t want to remain in place for the photo, but it measured the longest, closely followed by the Noctua’s; the Sharkoon’s is quite short as you can see.

now if they would team up with Papst and use a better bearing, the amount of ownage they could put on the market is frightening


I wonder how the people at SPCR reacted on those result, seing their Globalwin being pwned.