At the beginning of September NVIDIA released their reincarnation of the G71 based GeForce 7900 GT. As midrange card the 7900GT seem to be the best buy for a big group of gamers in the first half of 2006. This time around they’ve given the mid-range card a speed boost to high end! With world leading VGA partners offering their version right away let´s see which can give us the best 7950 GT.

Past year, I'm speaking of the year 2005 AD, nVidia released their newest DirectX 9 video accelerator cards based on their G70 GPU. The 7th generation nVidia gpu was first thought to be not a big jump forward regarding the architecture, but the final results spoke for themselves. The 7800GTX came back early 2006 with a fresh new name and a more efficient/smaller core. The 7900GT was born offering 7800GTX processing power for less money. NVidia's newest king of the hill, the GeForce 7900GTX, used the same core and rolled out of the factory at much higher frequencies... the G71 is a successful die shrink. The release of the 7950 GT prove this, here are some specs:

Between the launch of the 7800GTX past year and now nVidia has made a significant upgrade on the core clock as well as for the memory clock. As the other main parts did not change you will see that the 7950 GT gained a big performance boost over the original 7800GTX. The best thing is that the 79x0 GT is a mid-end product, where the 7800 GTX was meant for high-end users. Another good thing is that nVidia kept a single slot cooler and that it might be possible that the 7950 GT is less power hungry due to the 90nm process (even with the higher core/memory clocks applied). 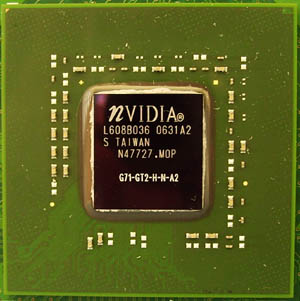