For some people, fast just isn´t fast enough. When you want to build a really high end system, you must search for the best memory out there. Today we take a look at 4 memory kits that are positioned at the upper end of the performance spectrum. Let´s find out which kit comes out on top.

I guess we finally made it: after a few weeks of testing, comparing and writing we've finally arrived at the point where we can actually present you with something. And it is not just something, it's actually a quite ambitious new project where several of our writers will be participating in: the construction of an comparative table for DDR2 memory. My role in the memory table will be the Intel side of things, and for this we put together an all round test platform based upon an Intel 965 chipset and an Intel Core 2 processor. My fellow reviewer Liquid3D will be focusing upon the AMD side of things, and for this he has constructed an AM2 bench setup, based around an nVidia nForce 590 chipset and an AMD Athlon 64 processor.

Our goal is quite simple if you like: every test of a memory module, today and in the future, will be inserted in a memory performance table. The best module will be on top of course, and every module will be compared to each other and a basic memory module. This way you will be able to see how one module performs in relation to another, and you can decide whether a module is worth your money...

To get our memory table started we wanted to present you with a major test. I guess I'm not exaggerating when I'm stating that we are taking off with some of the most exclusive parts in the industry. Today we want to present you with a comparison of 4 different memory kits, three of which are new arrivals. 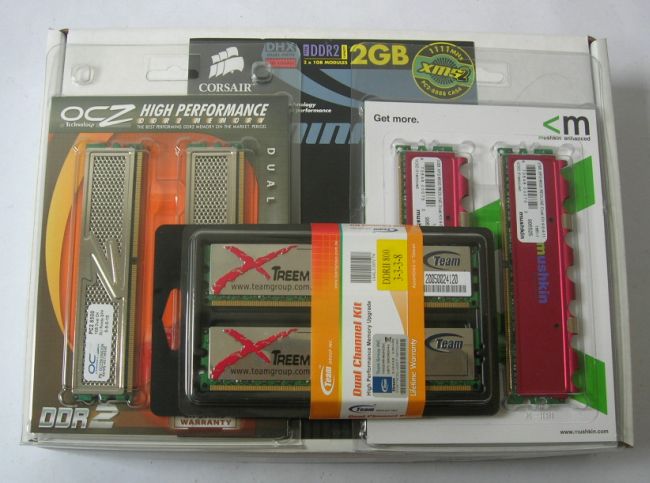 We've got three very famous manufacturers for you : Mushkin, OCZ, and Corsair, and one relative newcomer, at least here in Europe : Team Group.

Comment from Sidney @ 2006/11/27
Very nice article; can hardly wait for the mid-range to come out for comparison.

Comment from geoffrey @ 2007/03/20
Mine seem to pass 525MHz at CAS4 on 965 chipset, keeping in mind my previous results on C3 I should suspect there is more left in yours sticks Blind-ripper.