Today we take two popular kits PC2-8000 from Crucial (Ballistix PC2-8000) and Super Talent (PC2-8000 T1000UX2G5) for a spin. Tests will focus on the tightest manual timings at several speed grades across AMD and Intel systems. 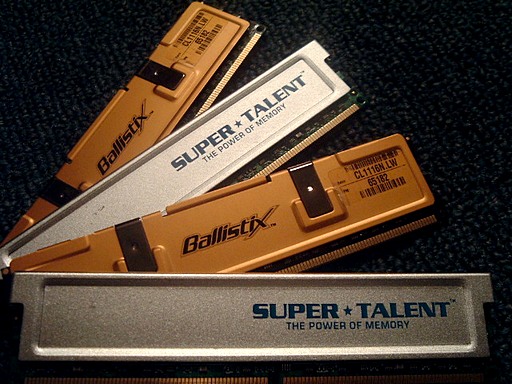 Both Crucial and Super Talent have made a substantial impact on the DRAM industry and since the advent of DDR2 each has consistently produced some well respected products. Beginning with Crucial Technology we’ve had the pleasure of reviewing many kits from this company including my review of their Tracer memory which dates back to 2005. Today we test their Ballistix 2GB kit (1GBx2) DDR2 PC2-8000 running • 5-5-5-15 • UNBUFFERED • NON-ECC • DDR2-1000 • 2.2V • 128Meg x 64 rate the speed at 1000MHz running CL5-5-5-15 and 2.2V. 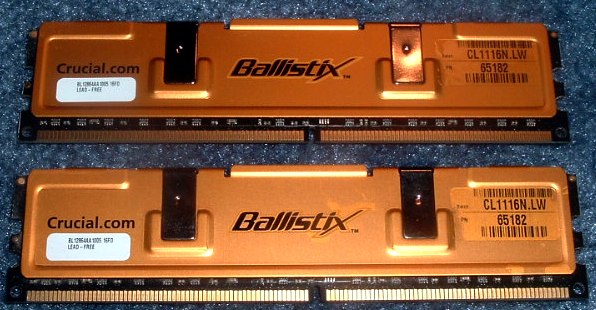 Crucial’s Ballistix memory line includes many kits offering performance which accentuates just about any systems. Crucial Technology is unique among most independent memory makers as they are brainchild of Micron. The quote below exemplifies the relationship between Crucial and Micron.

The Crucial story starts with Micron Technology, Inc., one of the largest dynamic random access memory (DRAM) manufacturers in the world and the only one based in the U.S. Headquartered in Boise, Idaho, Micron manufactures DRAM chips and assembles them into high-quality memory modules for sale to original equipment manufacturers ("OEMs") worldwide...in 1996, Micron responded to a growing demand for high-quality memory upgrades among end users who wanted the best possible performance from their systems. Micron launched Crucial Technology in September of that year, and for the first time, end users had the opportunity to buy directly from the manufacturer the same memory modules bought by the world's major OEMs for original installation in their systems.

Examining the relationship between Micron and Crucial one would presume that this relationship should offer some prima facie advantages in the area of binning. It would only seem logical Crucial would have the pick of the very best DRAM IC's produced by their parent company’s Boise Idaho or Manassas Virginia Fabs. On the same premise a single distributor might handicap their ability to produce memory which only benefits from IC's made by other companies. Fortunately for Crucial this doesn't seem to be a problem, at least that we're aware of. 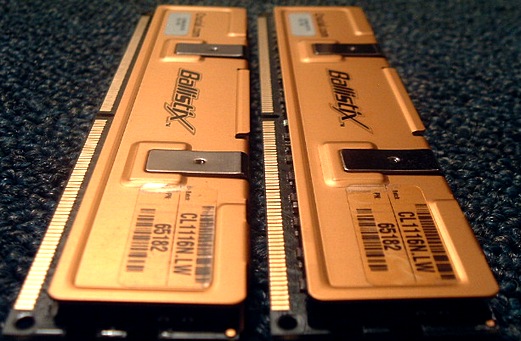 Today's tests may reveal such advantages, however; were comparing memory with similair specifications. Nonetheless as we continue to build our DRR2 database, answers to such questions should become apparent in our performance graphs. Currently Micron "D9 Fat body" IC's are the BH5's of DDR2 and found in many 2GB performance kits running between PC2-6400 ~ PC2-8000 range. The following "FatBody D9" list identifies speficific kits from various manufacturers using those ICs, which scale quite high esecially when fed voltages beyond 2.2V. An easy way to determine if your memory sports "FaBody D9's" without risking damage removing the heatspreaders is to look at the memory form a side profile as in the close-up below . 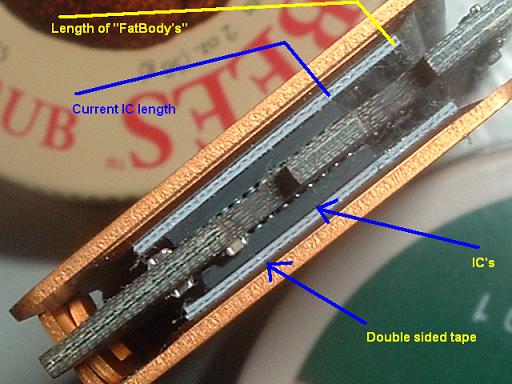 As is evident from the length of the IC's these are not of the Fatbody D9 variety, which I discovered very quickly during early overclocking tests. Raising the voltage beyond 2.25V resulted in poor performance. This fact did not dissapoint as you'll discover in the test-methodolgy section. My goal was to run these kits at the tightest timings and highest speed while adhering to the manufactuer's voltage specifications. Albeit desktop, server or overclocking memory, performance is always determined by the sum of the parts including the IC's, PCB, and the pre-programming or SPD, not necessarily the ICs alone. Perhaps our next test subject Super Talent will support this theory.

Super Talent has been around for sometime, yet their popularity among the overclocking community is fairly recent. The consensus has been Super Talent produces relatively inexpensive memory which has very good overclock potential, even among their "non-overclocking specific" memory. As for their overclocking memory, they certainly have found some very good sources for IC's including Micron as in the kit tested here. My experience with Super Talent has been limited to their PC2-6400 and now PC2-8000 with the former running at or above the speed of the latter; this is great news for Overclockers given the price. Of course this begs the question if a kit of DDR2-800 can run at 1000MHz why buy the more expensive kit? The answer is simple, tighter latency = better performance (in most applications). Super Talent offers a large number of kits for every conceivable use. They have also made some pertinent contributions to the memory market as found in the quote below from their site.

As stated in the title the part number we'll test today from Super Talent is a 2GB kit of PC2-8000, Part # T1000UX2G5. Rated from 1000MHz on CL5-5-5-15 at 2.20V I received this kit some time ago which is the reason they are dressed in silver heatspreaders instead of Super Talent's new anodized blue aluminum heat-spreaders which have more surface area to dissipate heat. 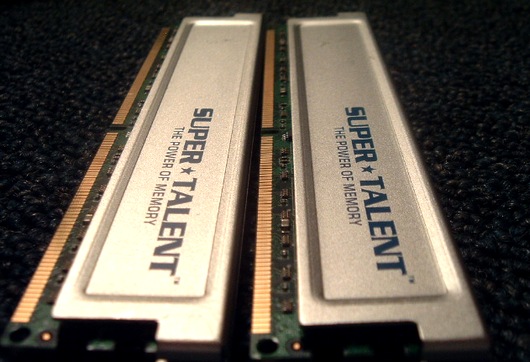 Onto test systems and methodology (Benchmarks) ->