Today?s computers desire more and more power, and that power has to be clean and stable. For those that want to push their computers a little above their specifications, these devices have become a deciding factor for reaching maximum performance. We have models from Silverstone, OCZ and Sharkoon on our testbed.

Like all things in the computer business, Power Supply Units, or PSU's in short, have changed quite a lot in recent years. Not that long ago they were probably the most overlooked component of the entire PC. As long as the PC powered up when you pressed the button, all was well. Nowadays, we're much more aware of the power supplies we put in our systems because of a couple of important reasons. To start, the power consumption of some key components has increased tremendously, especially our CPU's and graphics subsystem. Secondly, the number of different components and different connectors has increased in recent years and the new psu's have to follow suite. Last but not least, our awareness of the efficiency of a psu has risen along with the rising of the energy prices, and is an extra factor to be taken into account.

Today we're taking a look at some high-end power supply's from 3 well known brands : OCZ, Silverstone and Sharkoon. The PSU's we are looking at are 700-750W units, and there for geared towards the so called "enthusiast" community of dedicated gamers, high-end users and overclockers. My fellow reviewer Piotke has already taken a detailed look at the Silverstone PSU, so we're going to focus especially on the other two in this review. 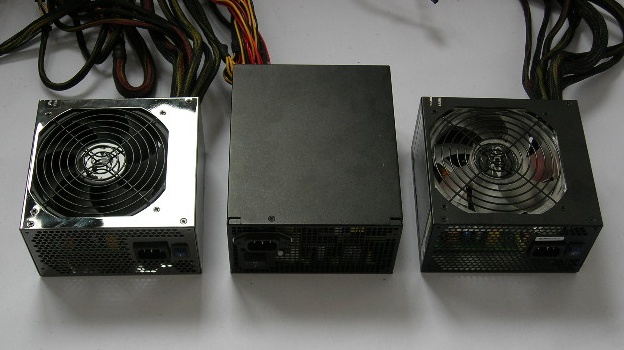 Look at these beauties, waiting to be tested for their full potential
Left to right : Sharkoon, Silverstone, OCZ

OCZ of course is the well known manufacturer of memory modules. They've been at it since 2000 and have established quite a name among the enthusiast community. Since early 2004, OCZ also produces high-end power supplies, which have received praise from reviewers around the world. In this review we're taking a look the GameXstream 700W PSU, which sits at the top of their current line-up of power supplies.

Sharkoon is the developer of a wide range of enthusiast products, ranging from cases to case cooling products and case-modding gear up to input devices and multimedia accessories. Somewhere in the middle of those lies their range of power supply units. Today we focus on the top end of their lineup: the Silentstorm120 700W power supply, which should be a worthy successor to their older Silentstorm range.

Last but not least, our third competitor, the Silverstone Zeus 750W PSU, comes from a company well known for their excellent aluminum computer cases. The relative young company - founded in 2003 - has become one of the most important designers and manufacturers of HTPC enclosures. But also their processor coolers, fans and metal alloy accessories are well known. Lately they have made quite an entry in the high end PSU market with their Zeus series of heavy load power supplies. This PSU was tested by fellow reviewer (Piotke) against the very formidable Zippy 700W, which basically resulted in a tie of impressive performance from both units.

As the previous review already covered the important aspects of the Silverstone, we're going to focus on the OCZ and the Sharkoon on the next pages. The Silverstone will be undergoing the same tests however as the other two, and will be included in the test results. Anyway, without further ado, let's get started ->