DDR is on its last legs with both AMD and Intel now supporting the newer DDR2 modules for their latest platforms. We present you with our most likely last DDR module review; two 2Gb high end memory kits from A-DATA and Team Group strive to help you get the most out of your Athlon 64 setup.

Welcome to my most likely last DDR memory review, my colleagues here at Madshrimps have already switched over the DDR2 realm, and with both AMD and Intel latest processors supporting the DDR2 standard it?s highly unlikely that there will be new product launches for DDR.

So today I present you with the last of a dying breed, low latency high speed DDR memory kits, A-DATA and TEAM Group send me their DDR500 modules for a thorough test.

A-data Technology Co., Ltd supplied me with Vitesta DDR500 Extreme Edition 2x 1Gb kit which is aimed at the price conscious gamer, with a hunger for speed. The kit comes in a sturdy plastic package, the memory chips are enclosed in flashy red heat spreaders which goes will with the red PCB of the Extreme Edition kit. 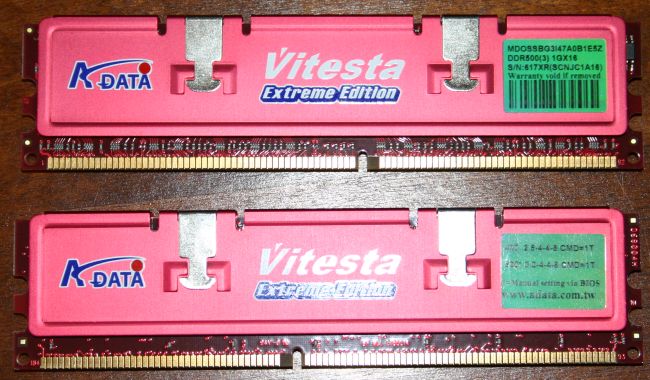 The aluminium heat spreaders are held together by two steal clamps, the red PCB is based on Jedec design, something which is odd as I?ve been accustomed to seeing the newer Brainpower PCB?s used for enthusiast modules.

Based on Samsung UCCC chips the MDOSSBG3I47A0B1E5Z Extreme Edition from A-Data is rated at: