Intel Core 2: Is high speed memory worth its price?

Does the Intel Core 2 need fast DDR2 memory to perform at its best? In this article we compare different memory speed and timings to provide you with the answer. Read on to find if cheap memory is enough to feed the Conroe.

Last month Intel officially announced and released their new desktop CPU, the Core 2. With rave reviews from all over the web it's hard to imagine this CPU not being a success with the hardware enthusiasts.

With the spotlight on the CPU and sometimes the motherboards it seems the DDR2 memory modules are mostly being left in the dark. We aim to answer the following question in this article: Do you need expensive higher rated DDR2 modules to get the most from a Core 2 setup?.

With AMD's AM2 we've seen that you need DDR2 800 with rather strict timings to achieve optimal performance and match that of the older S939/DDR1 combo. Prices for these high speed DDR2 memory modules can easily be double of the value minded products, yet the performance increase is unfortunately not doubled. Will Core 2 + high speed DDR2 tell a different story?

In order to test a wide range of memory speeds and timings we needed high quality modules, OCZ Technology helped us out with 2x 1GB DDR2 PC2-7200 Platinum SLI-Ready. 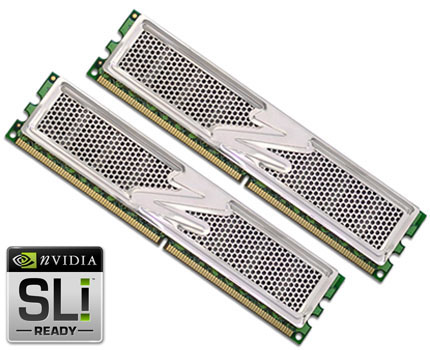 Rated at DDR2 900 at very low timings (for DDR2) of 4-4-3-15 they should scale well from bottom to top of the different memory speeds/timings available.

What speeds did we test?

We tested 4 different memory speeds with 3 different timings and compared performance using six different benchmarks (including synthetic, games and applications). Using pricing info from Newegg.com and Alternate.de for 2x1Gb modules we created the following table as a brief overview: 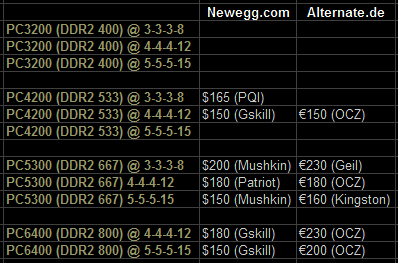 Depending on where you shop you will run into similar prices, $/€150 seems to be a popular price point for the value line products.
Test Setup