We compare four 7900 GT video cards ranging from the price competitive Club 3D to the outrageously overclocked EVGA version; between those two extremes there are interesting products from Sparkle and MSI which also sport factory overclocked speeds. Read on to find out how they perform in games, how high they overclock and if their cooling is effective and quiet.

Many moons ago NVIDIA released their Geforce 6 series, this success product line-up made us forget the rather poor showing the Geforce FX. One of the most popular products starting with the number ?6? was undoubtedly the 6800 GT, striking a good balance between price and performance; The 7800 GT which followed was even more successful, as the performance boost between the 6 and 7 series was quite noticeable, yet a large price jump was not seen, giving you more performance for the same money. 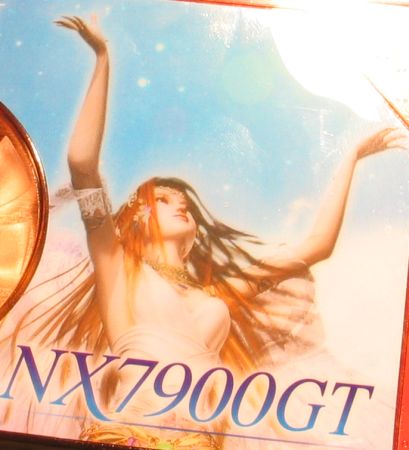 The 78xx series was short(er) lived however as NVIDIA announced a product line update earlier this year, the 7900 introduced a die shrink, making the chip run cooler and faster, the 7900 GT was introduced at the price of the 7800 GT yet it had the performance of the high end 7800 GTX part (256Mb version). Following in the footsteps of the earlier ?best bang for the buck? products, the 7900 GT proved even worthier as the default clocks speed NVIDIA let it run at were quite modest, and many board partners are selling their 7900 GT cards at overclocked speeds. Today we test four different cards made by MSI, eVGA, Sparkle and Club 3D. 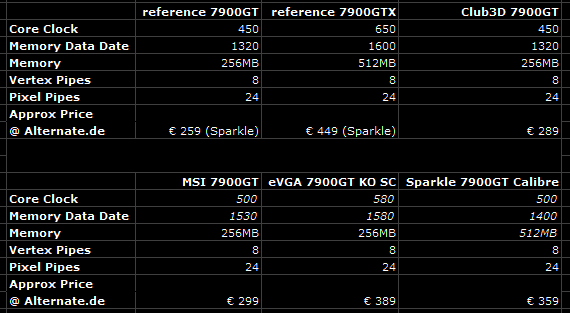 Three out of four cards come factory overclocked, ranging from a modest 50Mhz increase on the Core and 100Mhz on the memory, to an almost GTX like overclock on the 7900 GT version from eVGA.

Sparkle sets itself apart from the rest by upping the onboard memory to 512Mb. Whether or not the extra memory results in an increase in performance we are set to find out.

Let?s take a closer look at each of the video cards in the roundup.